People Are Matching Their Manis to Their Pets’, Because Why Not? 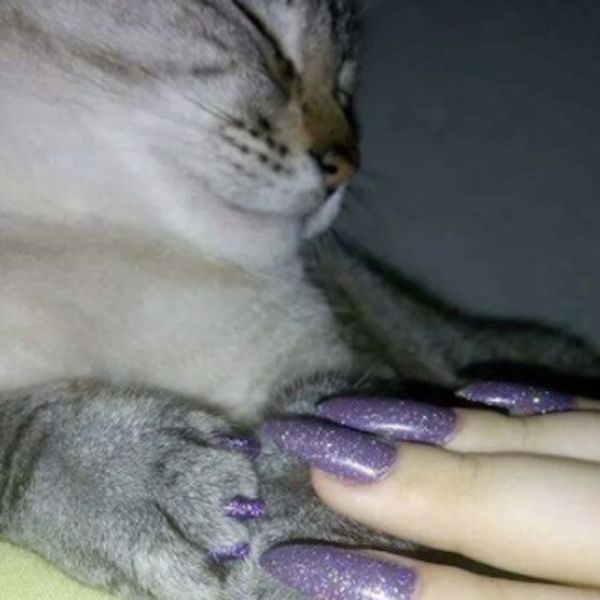 We love a good manicure. Whether it involves a statement-making hue, like chrome, or the most popular neutral tone on the market, we’re here for it. We also love our pets beyond belief, and we’re certainly not alone: Many women in their 20s and 30s are even choosing Fido and Fluffy over having kids. Still, we must say: The thought of matching our pets’ nails to ours never, ever crossed our minds… until now.

19-year-old Cristi Hanzel shared a snap of herself doing just that, with her sparkly purple nails perfectly matching her cat Wednesday’s claws. Before she knew it, the image had gone viral, as loving pet owners around the country admired the shot for its sheer adorableness.

Before you freak out, you’ll want to note that the teen didn’t use actual polish (which is actually toxic for animals!) on her feline friend. Instead, she simply picked up some nail caps at Target that happened to be the same shade as her mani. With over 2.5K likes, the snap, which Hanzel simply captioned “Bffs,” has gotten all sorts of positive feedback and revealed a surprising truth: She and Wednesday are not alone. Far from it, in fact!

There’s actually an entire industry dedicated to the cute AF nail caps (whose real purpose is to help prevent your four-legged besties from scratching up floors, furniture, and other items around the house). One of the largest vendors, Soft Paws, specializes in nail caps for both kitties and pups that are bright, colorful, and perfectly in tune with all the latest nail trends. Developed by a vet and made in the US from non-toxic vinyl, the caps are applied “using a non-toxic, cold-bonding, veterinary-grade adhesive” and promise to last four to six weeks, all while letting your fluffy pal go about his or her day-to-day activities.

While they’ve been considered controversial by some, PETA has endorsed Soft Paws as a safe alternative to declawing, and there’s certainly no denying that the adorbs twinning snaps shared on Twitter by fellow stylish pet owners are growing in popularity.

I've done this with my ruby ♥️✨ pic.twitter.com/JSTqvHSSm2

Would you buy colorful nail caps for your pet(s)? Tweet us @BritandCo.