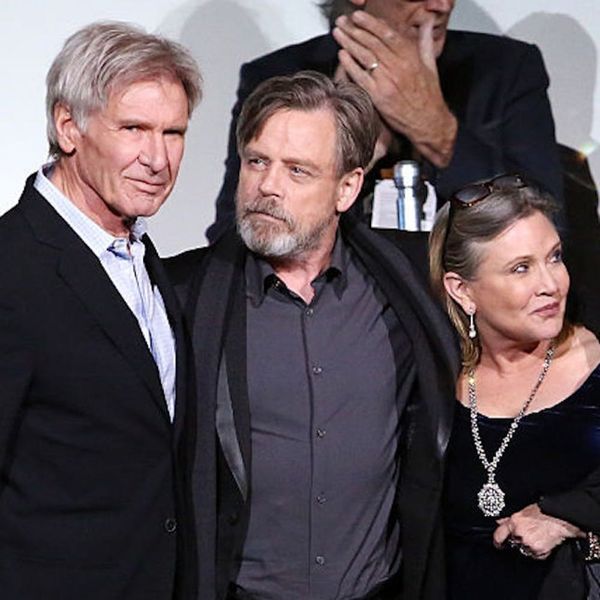 An old Hollywood affair resurfaces and Khloe Kardashian helps people get revenge bodies in this morning’s top news stories. Check those and more out below!

1. Princess Leia and Han Solo TOTALLY hooked up! In an excerpt from her new book The Princess Diarist, written from old journals she kept during the filming of the first Star Wars movie, Carrie divulged that one night after a birthday party for director George Lucas, the two spent their first night together. “I looked over at Harrison. A hero’s face — a few strands of hair fell over his noble, slightly furrowed brow,” People excerpts. “I was so inexperienced, but I trusted something about him,” she says, after calling their affair “intense.” “He was kind.” Ford was married with two young children at the time; the whirlwind romance ended when filming did.

2. This pic of Kirk walking his pet pig is probably the best sneak Gilmore Girls peek we’ve gotten yet. There are also pics of Rory and Paris talking to the Chilton Headmaster and yadda yadda. Please look at this picture of Kirk, explaining the appearance of the pig in the trailer. Thank you. (Via E! Online)

3. We just got our first look at Khloe Kardashian’s new show Revenge Body, and it looks as addictive as you thought. We first heard about Revenge Body at the start of the year, and on January 12, 2017, the first episode will air on E!. Do you like The Biggest Loser and also Khloe Kardashian? Well, you’re in luck! “This is all about empowerment through positive transformation, inside and out!!” Khloe wrote in her Instagram caption with a preview clip. “We’re embarking on a journey to make our haters our biggest motivators!!” Um, yeah, we’ll totally be watching this.

4. OMG, SNL just pulled off the most amazing Mannequin Challenge. Kristen Wiig is returning to her old stomping grounds to host Saturday Night Live this weekend, and the whole cast and crew pulled off an EPIC version of the viral video craze as this week’s promo. Not only does it look super cool, but there are tons of amazing Easter eggs for SNL diehards too. Check it out above.

Hunter Zion Bell. So in love with our little man ❤️❤️❤️@josiahbell

5. Jurnee Smollett-Bell had her baby boy and introduced him to the world in the SWEETEST pic. The Underground actor (and as you may also remember her, original Full House alum) snuggles little Hunter Zion close in this pic that’ll make you squee. “Hunter Zion Bell. So in love with our little man @josiahbell,” she captioned the pic, tagging her husband, musician Josiah Bell. This is the couple’s first child. Congrats!

6. Quote of the day: “Um, does Donald Trump think he’s still on The Apprentice?” Twitter was gobsmacked when Donald Trump last night tweeted that only he knew who the “finalists” for his Cabinet were.

Do you think Donald Trump should have full control of his own Twitter account throughout his Presidency? Let us know over @BritandCo.