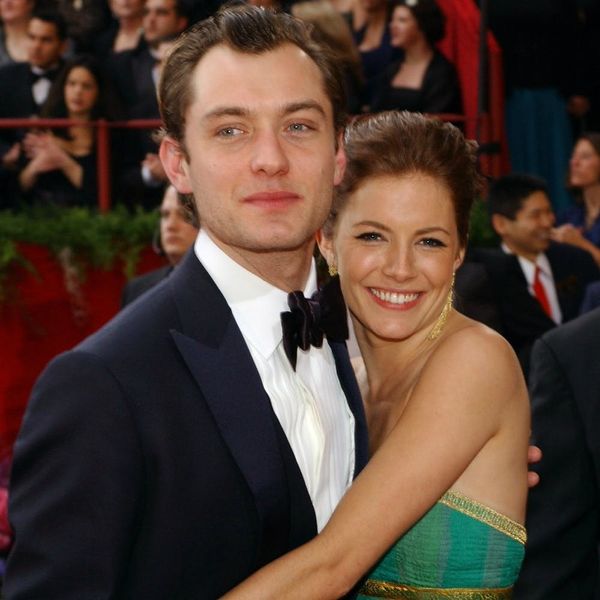 Get excited Brit + Co-ers: We’re halfway through the week! We’re reflecting on lost love and new beginnings today, as the fabulously coiffed Sienna Miller talks Jude Law and Maci Bookout gives birth to baby number three. Check out all of the rest of the buzz below!

1. Sienna Miller says she still cares for Jude law: Back in 2006, Jude Law and Sienna Miller were Hollywood’s seemingly golden couple, and hearts around the world were broken when the two decided to call it quits amidst a cheating scandal. Now, a decade later, newly single Sienna admits that she still has some feelings for her former fiancé. She recently told PORTER magazine during her cover interview that even though she doesn’t see him much, “I care about him enormously.” Awwww, Sienna! It’s not exactly a profession of love, but it IS enough to make us long for the good old days when the couple was too busy gazing into one another’s eyes (see above) to have a care in the world. Sienna went on to tell the outlet that, for her, a relationship won’t work if her mate isn’t intelligent. “I like intelligence. It’s the only thing I’ve ever been attracted to. People that aren’t clever enough fall to the wayside.” (Photo via Gareth Catermole/Getty)

2. Kate Moss is collaborating with Equipment on a line of shirts: Get ready, fashion junkies: The queen of style herself, Kate Moss, is teaming up with luxury brand Equipment to design a capsule collection. The supermodel told Vogue, “The Equipment people bought the shirts and I reshaped them a bit and talked about the prints and how the pockets should be. I like having part in designing something.” It’s a natural progression for Kate, really. “Clothes are my thing,” she told the fashion mag. “I like to talk about them, touch them, see what feels right.” Kate went on to say that the collection will continue for spring — “I was looking in a secondhand shop in Brazil and found all these ‘70s shirts,” she said. “It’s going to be really colorful!” We, for one, can. Not. WAIT! (Photo via Equipment)

Our smart, sweet, and oh so sassy baby girl is a whole year old today! Happy 1st Birthday Miss Jayde Carter, you bring so much love & laughter to our lives! 👶🏻🙃🦄🎉💜

3. Teen Mom Maci Bookout welcomes baby number three: We first met Maci Bookout back when she was 16 and Pregnant with her first child Bentley on MTV. The 24-year-old has come a long way since then, and, as it turns out, she really loves being a mommy: In fact, she just followed Jena Malone‘s lead and welcomed her third child with her fiancé Taylor McKinney! “Mr Maverick has officially made his debut and completed our family,” she shared on Twitter. “So much love, so many blessings.”

4. JetBlue is apologizing to a woman after forcing her to change because her shorts were “too short:” Maggie McMuffin (yes, real name!), a burlesque dancer in Seattle, was recently reprimanded for her choice of clothing on a JetBlue airline when the crew informed her that her outfit wasn’t suitable for flight. “The gate leader approached me and said there was a problem and that what I was wearing was not appropriate. [They] were hoping I could put something else on,” she said. “I informed them that I didn’t have anything else… They suggested I go buy something.” Maggie complied, purchasing a pair of pajama pants in the airport where her flight was laid over. While JetBlue initially stood by its original decision, the media attention the viral photo of her outfit has caused has the airline changing its tune. The company has since apologized to Maggie and refunded her the $22 for the pajama pants, in addition to issuing her a flying credit of $162. Maggie says she would rather have an apology from the pilot (who apparently had the deciding vote) and a clear flight dress code. “I’d say it was body shaming and slut shaming more than outright sexism, but it is really hard to remove those two things from misogyny.”

5. This video of President Obama “singing” Rihanna’s “Work” will make your day: Okay, okay, so he’s not actually singing: YouTube user baracksdubs is behind the clip, splicing bits of the President’s speeches into Riri’s latest hit, but it does have a ring to it, no?

6. Quote of the day: “When you finally have kids, you realize how selfish you are. I think we are naturally selfish beings. When you have kids, that can kind of be a shock at first.” Cover girl Kristin Cavallari to Modeliste magazine. (Photo via Mark Davis/Getty)

Are you suprised by Sienna’s latest revelation? Tell us over @BritandCo!

Nicole Briese
Nicole is the weekend editor for Brit + Co who loves bringing you all the latest buzz. When she's not busy typing away into the wee hours, you can usually find her canoodling with her fur babies, rooting around in a bookstore, or rocking out at a concert of some sort (Guns N' Roses forever!). Check out all her latest musings and past work at nicolebjean.com.
Celebrity Baby
Pop Culture
Celebrity Baby love Morning Buzz
More From Pop Culture