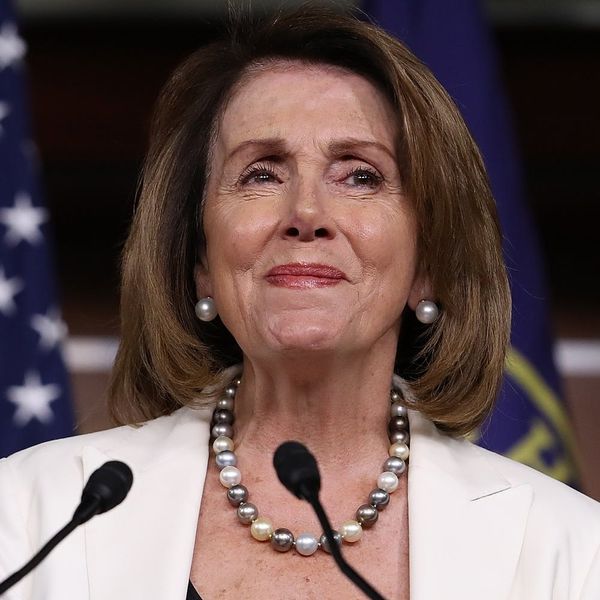 While Democrats and Republicans scramble to try and manage the fallout from the DACA repeal, some of the major players from both sides of the aisle got together with the president on Wednesday night for a working dinner at the White House. President Trump invited 10 senators, including Dems Chuck Schumer (NY) and Minority House Leader Nancy Pelosi (CA) to discuss reaching an agreement around DACA and the immigration reforms the GOP hope to enact in coming months (including building the president’s infamous wall).

The Washington Post is reporting that during the group’s immigration chat, Commerce Secretary Wilbur Ross asked, “What exactly does the president get out of this deal?” Pelosi started speaking, saying essentially that the President was hoping for Democratic cooperation across many issues, including immigration reform.

She was then silenced by the 10 men at the table, who proceeded to talk over her while yelling at each other. Pelosi had had enough. “Do the women get to talk around here?” she’s reported by The Post as saying. This simple comment finally silenced the room, and she apparently was not cut off or mansplained to again.

After this dinner, Democrats said they’d struck a deal with the administration, saving DACA and stopping the border wall from being built in exchange for agreeing to tighter boarder security. This seemed like a massive about-face for the president and a huge win for those hoping to save hundreds of thousands of DREAMers and their families. But of course, each side of the table that night had different ideas of what was agreed upon.

Early Thursday morning, the President tweeted that he had not, in fact, agreed to stop the building of the wall, and that building was already underway by way of repairs to already existing pieces of fence along the US-Mexico border. During his early morning tweet storm, the President also said of DACA, “Does anybody really want to throw out good, educated and accomplished young people who have jobs, some serving in the military? Really!…..” before announcing a trip to Florida to survey the damage brought by Hurricane Irma.

While chaos continues to reign in Washington, one thing’s for sure: It’s fantastic to hear about a woman finally getting to say her piece (even if it requires a little verbal sparring).

Have you been mansplained to or spoken over at work? Tell us how you resolved it @BritandCo!