Here’s *Everything* You Need to Know About DACA 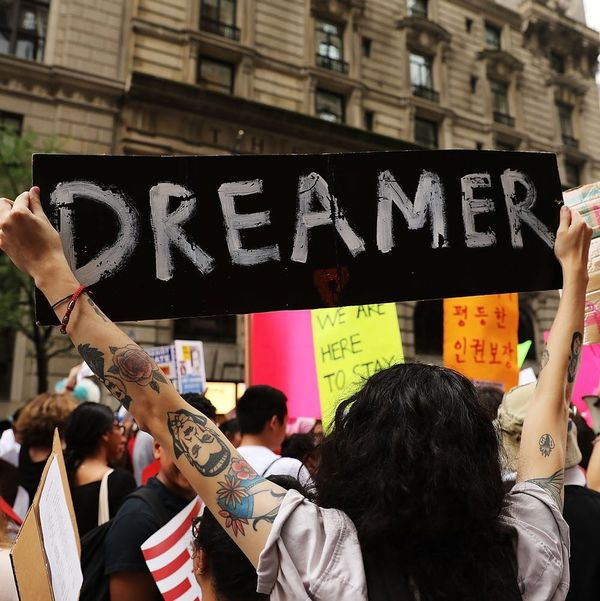 Since late August, the GOP has been working to repeal DACA and put the livelihoods of nearly one million people at risk. With this week’s announcement by the Oval Office that the Obama-era protections would be removed, many are left wondering what happened and how we ended up with 15 states and the District of Columbia setting in motion a series of lawsuits to force the government to stop their repeal. If you’re worried or unsure of how this has all happened, here is everything you need to know about DACA and the current federal lawsuits gaining ground in Washington today.
On September 5, Attorney General Jeff Sessions announced plans to reverse DACA. With the announcement, the GOP has given Congress six months to fully stop the program, but they have not said what they will do with DREAMers or their families. (Photo via Alex Wong/Getty)
15 Democratic state attorneys along with the District of Columbia have joined forces to sue the Trump administration for their decision to end DACA. The suit was filed in the Brooklyn federal district court by lawyers from New York’s Eric Schneiderman’s office, joined by attorneys general from Delaware, Connecticut, Hawaii, Illinois, Iowa, Massachusetts, New Mexico, North Carolina, Oregon, Pennsylvania, Vermont, Virginia, Washington state, and Washington, DC. (Photo via Drew Angerer/Getty)
According to the coalition, the president’s decision to rescind DACA without guidance from multiple legal resources or public input violates federal law. The suit argues that the decision to repeal is not motivated by the constitution but by a bias against people of Mexican origin — the bulk of people protected under DACA. The suit goes on to argue that this bias violates the equal protection clause of the fifth amendment, which mandates that all people regardless of race or origin be treated the same way. (Photo via Michael B. Thomas/Getty)
DACA or Deferred Action for Childhood Arrivals was put into place by President Obama in 2012 to protect the children of immigrants who may not have legal status in the country. The law was designed to ensure that these children and young adults were protected, as they did not make the decision to come to the US. The Aim of DACA was to allow these kids, who have spent most of their lives in the US, a chance to thrive in their adopted home. Under DACA, these individuals (called DREAMers) are able to legally work, attend school, and pay taxes while their families figure out ways to obtain legal visa status. (Photo via Joe Raedle/Getty)
This is not a free ride for illegal immigrants, contrary to the belief of some opponents. Although DREAMers didn't arrive to the US with immigration documentation, many of them came here at such a young age that they don’t know a life outside of America. (Photo via Spencer Platt/Getty)
DREAMers are the children of folks who settled in this country without visa status. The name comes from the original DREAM act, or Development, Relief, and Education for Alien Minors, first tabled in 2003. Currently, there are around 800,000 DREAMers protected under DACA. Most of them are between the ages of 20-35 and have lived in the US for most of their lives. DACA gave these folks access to education, and an ability to work legally. DREAMers contribute millions of dollars to our economy through the taxes they pay, the money they spend, and their own children living here. (Photo via David McNew/Getty)
Back in March, a young man with an expired visa was arrested and set for deportation, along with his father, during an ICE raid in their home. At the time, his 22 year old sister, Daniela Vargas was protected under DACA, so she was left in the home. After a press conference where Vargas condemned the raid on her family home, she too was stopped by ICE, arrested and deported without trial. One concern is that the repeal of DACA would lead more young people to be arrested and deported or separated from their families, potentially without due trial, to countries they may or may not even remember. (Photo via Getty)
Business leaders like our own Brit Morin have joined forces to sign a letter condemning the actions of the administration in its repeal of DACA. The letter states that, besides the dehumanizing effects of a potential DACA repeal, “our economy would lose $460.3 billion from the national GDP and $24.6 billion in Social Security and Medicare tax contributions.”
Besides the protests that are happening across the country, there are a number of ways to get involved. According to reports, over 64 percent of Americans disagree with the repeal of DACA. It’s our time to be heard. One approach is to write a letter or an email to your member of Congress. You can also call their offices or use an app like Resistbot to help put your congressperson on blast. (Photo via Zach Gibson/Getty)