How the New Blood Pressure Guidelines Could Affect You 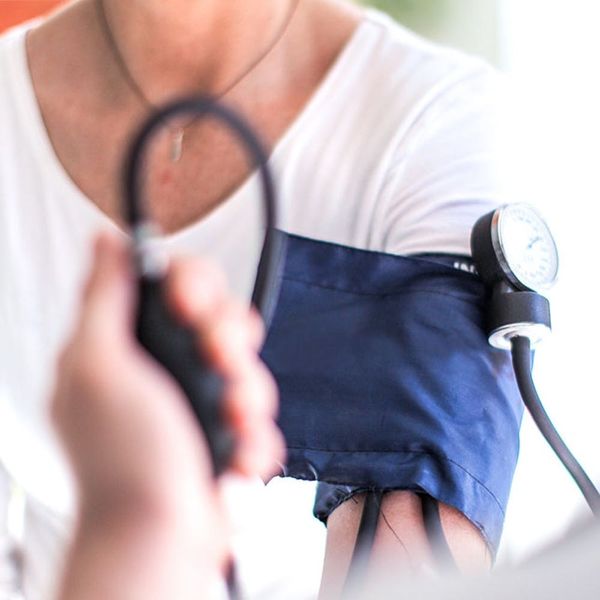 Chances are, if you’re young and relatively healthy, you don’t give your blood pressure much thought. As you go about your day, it’s pretty easy to take for granted that blood is coursing throughout your body like it’s supposed to, efficiently delivering oxygen and nutrients to your trillions of cells. Those noisy arm-squeezing machines at the drug store? Meh, they’re for the elderly — or just a convenient place to sit down while waiting for a prescription.

But an attitude of nonchalance toward blood pressure may actually have serious health consequences. Experts estimate that a staggering 103 million American adults are living with hypertension (the formal term for high blood pressure). That’s nearly 50 percent. And the even more astonishing news: Many people don’t know they have it. This isn’t surprising, though, considering that too much pressure on the walls of the blood vessels often produces no symptoms. So, unlike many other health issues, hypertension may not be obvious until the situation has become dire.

As of November 2017, the American Heart Association, American College of Cardiology, and nine other public health institutions made some notable changes to their guidelines for what qualifies as high blood pressure. This revision — the first in 14 years — came after the AHA determined that research sufficiently shows that the danger zone for health risks is actually lower than previously believed. Whereas high blood pressure was formerly defined as 140 mm Hg for the systolic (or top) measurement over 90 mm Hg for the diastolic (or bottom) measurement, the organization now considers 130 over 80 the new standard for hypertension. And any reading of 120/80 or above is now categorized with the term “elevated” instead of “prehypertension.”

This reduction in numbers can sound a bit scary, but the goal of the new guidelines isn’t to freak Americans out (after all, that would be rather counterproductive, since stress raises blood pressure). Rather, public health authorities state that their intent is to help people address risks earlier, leading to more positive health outcomes.

Why it matters for you

Regardless of whether you’re one of the 103 million whose numbers have crept too high, it’s important to understand the health risks associated with high BP. A quick physiology lesson for reference: As blood flows throughout your arteries, it exerts force upon their walls (hence the term “blood pressure”). When this force becomes too great, it can overload the delicate tissue of the arteries, causing them to become damaged and constricted. This narrowing of blood vessels means your blood has a harder time reaching important destinations like your heart and brain. Therefore, high blood pressure is the primary culprit behind heart attack and stroke, the number one and number five causes of death for Americans respectively. It’s also associated with kidney disease, vision loss, and sexual dysfunction.

how to keep your BP healthy

So what can you do to protect your arteries and keep blood pressure in the clear? Lifestyle choices are the best defense. Try sticking with a heart-healthy eating plan like the Mediterranean diet or the DASH diet, both of which have evidence-based links to lowering BP. (DASH stands for Dietary Approaches to Stop Hypertension, so, yeah, it’s definitely a safe bet.) These two diets share lots of common ground, with their emphasis on whole grains, limited dairy and red meat, and plenty of fruits and vegetables — so you can’t go wrong with either. And do your best to keep sodium intake to a minimum. Since salt attracts fluid, it increases the pressure on the arteries. The American Heart Association recommends no more than 2,300 mg per day, with an ideal limit for most adults of no more than 1,500 mg per day.

Physical activity and stress reduction are two other reliable means of maintaining healthy BP. The heart is a muscle like any other, so it gains strength with exercise. A stronger heart doesn’t have to work as hard to pump blood throughout the body, meaning pressure exerted upon the arteries decreases. According to the Mayo Clinic, regular exercise reduces systolic BP by an average of four to nine millimeters of mercury (mm HG) — an effect as good as some medications. Taking stress down a notch also yields results. Though most spikes in blood pressure due to anxiety are temporary (like when you get nervous at the doctor’s office and suddenly it looks like you’re dangerously hypertensive — ugh), living in a chronic state of stress can have damaging effects on the heart and vascular system, including increased BP.

Finally, don’t be shy about getting your blood pressure numbers checked on the regular. Shake off any feelings of self-consciousness as you sidle up to that drugstore arm-squeezer, or ask about the reading at your next doctor’s visit. Knowledge is power, and knowing your numbers could make a significant difference to your health — sooner rather than later.

Have you heard about the new blood pressure guidelines? Tweet us what you think @BritandCo.

Sarah Garone
Sarah Garone is a mom, wife, nutritionist, and freelance writer in Mesa, AZ. She loves music and travel, speaks fluent German, and does a lot of running (to counterbalance the surprising amount of cookies she eats for being a nutritionist). Find her sharing great recipes and helpful nutrition info at A Love Letter to Food.
Healthy Living
Health
Healthy Living Womens Health
More From Health