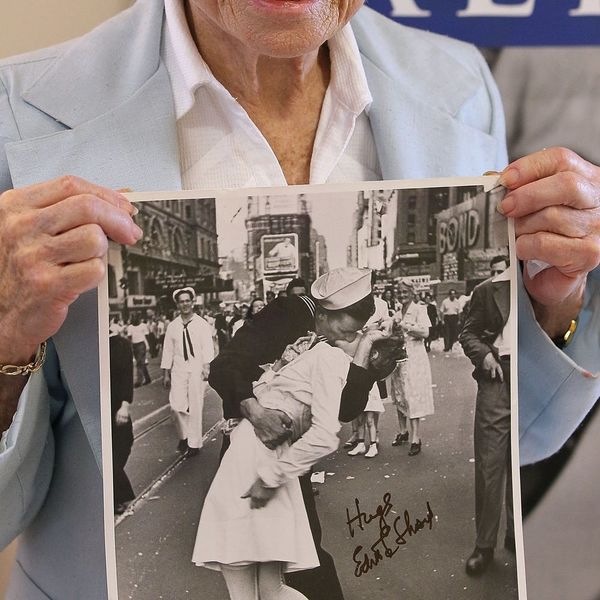 A 95-year-old World War II veteran named George Mendonsa died on Sunday. Although you may not know his name, you probably know his image. A photograph of Mendonsa as a young sailor, passionately kissing a nurse in Times Square on VJ Day, has become an iconic image associated with the end of the war.

In recent years, though, people have called into question the nostalgia over the photo after a woman who self-identified as the nurse said that the kiss was non-consensual. On Monday, a statue of the kissing figures in Sarasota, Florida, was graffitied in red paint with the caption: “#MeToo.”

Although it took decades to identify Mendonsa as the figure in the famous photograph, a woman named Greta Friedman pointed herself out as the nurse (in reality, she’d been a dental assistant) many years sooner. As the story goes, she recognized herself when she came across the image in a book of photos by the renowned photographer Alfred Eisenstaedt in the 1960s. It was then that she reached out to Life magazine, which originally published the photo, to say she was woman in the picture — although the magazine insisted otherwise.

“I didn’t believe that because I knew it happened to me,” she said in 2005 in an interview with the Veterans History Project. “It’s exactly my figure, and what I wore, and my hairdo especially.”

Friedman, who died in 2016, recalled that the sailor had just grabbed and kissed her while walking down the street during the exuberant celebration. A 2012 post from the blog Crates and Ribbons went so far as to say that Mendonsa’s kiss “would be considered sexual assault by modern standards.”

But whether or not the kiss was wanted, it became a symbol of the joy and relief many Americans felt as the war ended in 1945. Friedman never faulted Mendonsa for his kiss; her son told the New York Times at her death that she understood why some people considered it to be assault, but she didn’t necessarily feel the same way.

Although he was only 22 when the photo was taken, Mendonsa later recalled the joy he felt to learn of Japan’s surrender in a 2005 interview: “‘For Chrissake, the war is over!'” He was moved to kiss Friedman because he’d seen the nurses in action during the war and was appreciative of their work to save other troops.

“When I look at that photograph, I just think of my dad’s service, and how happy he was that it was all over,” Mendonsa’s daughter Sharon Molleur told CNN of her dad, who died two days shy of his 96th birthday.

“They [the sailors] ran out of the theater and began celebrating. Everyone was kissing everyone,” Molleur explained. “He was so thankful for all the nurses that had helped all the wounded soldiers.”