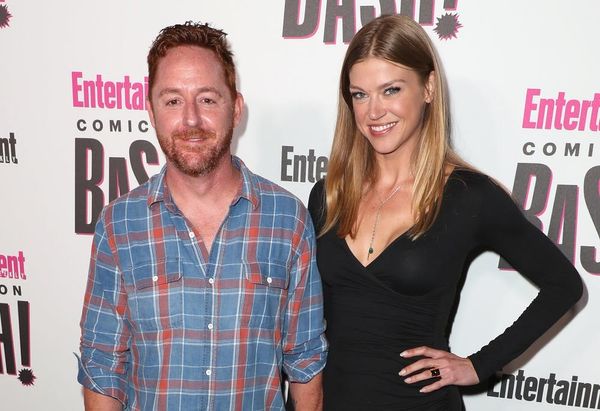 A showmance for the ages! Scott Grimes and Adrianne Palicki, who costar on the Fox sitcom The Orville, revealed on Thursday, January 17, that they’re engaged.

“So happy to spend my life with you @ScottGrimes,” Palicki tweeted with a photo of the couple snuggling up on the couch and showing off her brand-new diamond engagement ring. She added the hashtags “#ido” and “#iloveyou,” too.

The actors have starred on Seth MacFarlane’s science-fiction comedy on Fox since it premiered in September 2017. While it’s unclear when they started dating, Palicki posted a pic of them getting close during San Diego Comic-Con 2018, seemingly confirming their relationship status.

Several fans and friends took to Twitter to congratulate the happy couple, including Walking Dead actor Michael Traynor and actress Michaela McManus, who has appeared on The Orville in a recurring role. Television host (and former Bachelor star) Bob Guiney, for one, said he “couldn’t be happier” for the couple, to which groom-to-be Grimes jokingly responded, “Yes you could.”

This will be the first marriage for Palicki, best known for her role as Tyra Collette on Friday Night Lights. She was previously engaged to Jackson Spidell, whom she met on the set of the Keanu Reeves-starring John Wick in 2014. Grimes has been married twice before, to Dawn Bailey-Grimes, with whom he shares two children, and to makeup artist Megan Moore, from 2011 to 2017.

Are you excited to hear about this off-screen showmance? Let us know @BritandCo!