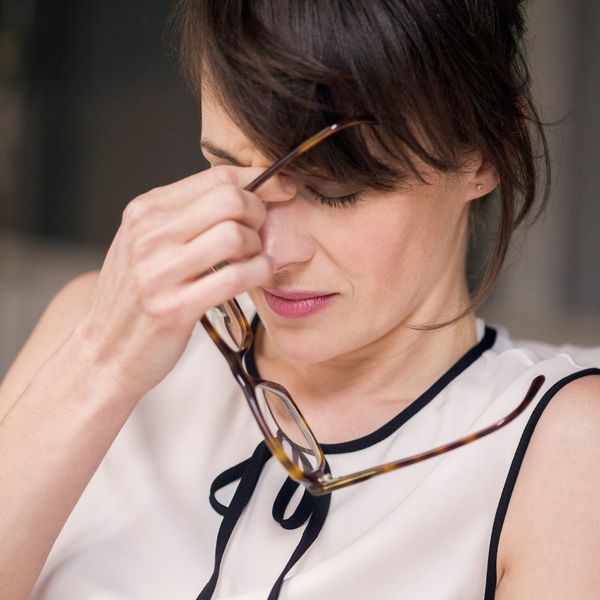 Pretty much everyone uses over-the-counter (OTC) pain relievers at some point in their lives, and when you really need them, they can be total lifesavers. Whether you’ve got period pain (the worst!), a concentration-ruining headache, or super sore muscles from working out, it’s natural to want your pain to go away ASAP. And even if you don’t normally reach for medicine when you’re feeling discomfort from something routine, most people end up taking non-steroidal anti-inflammatory drugs (NSAIDs) when recovering from any type of injury or surgery. But according to a new study, taking OTC pain meds has been linked to a higher risk of heart attacks.

It’s been known for awhile via previous studies that NSAIDs may increase the risk of heart attack, but there was a pretty big gray area with regard to how often you had to take them to be at risk, as well as how big the risk actually is. In this new study, scientists looked at NSAID use in almost 450,000 people, particularly those who had experienced heart attacks. What they found was pretty shocking: Anyone who took NSAIDs for between one and seven days was at an elevated risk for heart attack. Yikes.

While the risks of prolonged NSAID use are relatively well-defined (heart and stomach problems), the short-term risks haven’t always been as clear. What this new study shows is that even occasional or very short-term use of these medications is associated with a higher risk. Plus, some of the NSAIDs that upped the risk of a heart attack are really common ones: celecoxib, AKA Celebrex (24 percent higher risk); ibuprofen, AKA Advil and Motrin (48 percent higher risk); and naproxen, AKA Aleve (53 percent higher risk). And while there is an association between NSAIDs and risk of heart attack, the researchers point out that this doesn’t necessarily mean painkillers cause heart attacks; there are other factors, such as the subjects’ diet and lifestyle, that were not taken into account.

So what does this mean for you? Unless you have known heart disease risk factors, it’s probably fine to take NSAIDs every now and then. After all, as the lead researcher on the study, Michèle Bally, an epidemiologist at the University of Montreal Hospital, told The New York Times, the absolute risk involved in taking these meds is quite small, since most people aren’t at a high risk for heart attack. Still, she’d like to see people be more aware of their overall cardiovascular health, since many people aren’t. This means getting familiar with risk factors like your blood pressure and cholesterol numbers, as well as your family history of heart disease. She also advocates for reading the label closely and sticking with the lowest possible effective dose if you do choose to take NSAIDs.

What else can you do if you’re used to popping these babies on the reg? First, consider if there’s anything else you could do to treat your symptoms. Sore from working out? Try an ice pack and some stretching. Have period cramps? Use a hot water bottle or heating pad for 15 minutes before taking meds. Have a headache? Try laying down in a cool, dark room. Second, it’s always a good option to check in with your doctor, especially if you’re taking NSAIDs frequently. Your GP can suggest other ways to help deal with your symptoms and possibly even help get to the root of the problem. Lastly, know that it’s probably fine to take NSAIDs when you need to, but this new research shows that it might be smart to try to minimize how often you’re taking them whenever possible.

Have you tried any natural pain relief methods that really work? Tell us about it @BritandCo!