This Headset Will Make Augmented Reality an Everyday Thing 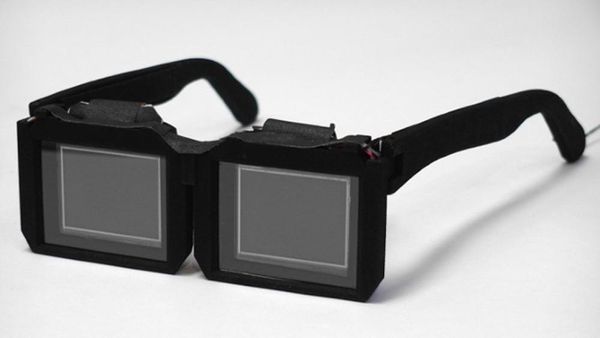 Google Glass may have unleashed an entirely new trend in wearable tech: smart eyewear. Considering the company has already adapted the gadget for prescription glasses and is currently working on contact lenses with a built-in camera, we think there is about to be a serious boom in this industry. We’ve already started to master things like GPS navigation and smartphone notifications, so what’s the next advancement for smart eyewear? Virtual reality. We know augmented reality devices already exist — and have for awhile — but Andrew Maimone, a PhD student at the University of North Carolina, has created a prototype headset that just might top them all. Mainmone’s glasses, called Pinlight Display, offer a field of view that basically wipes all current glasses out of the water. Today’s state-of-the-art commercial augmented reality glasses have a field of view of 40° or less, while Pinlight prototypes have demonstrated fields of view of 100° or more. Here’s how it works: Conventional augmented reality glasses use lenses, beam splitters, waveguides, reflectors and other optics to relay an image to the eye. Maimone and his team have tossed aside these conventional optical components and replaced them with something called pinlights. Pinlights are an array of bright dots that have been etched in a small piece of glass with a 3-D printer. A transparent display panel is placed between the pinlights and the eye to soften the light and form the perceived image. We know this all sounds very mechanical, but here’s what it comes down to: Anyone who has wore a pair of virtual reality glasses before knows that when you pop them on, peripheral vision is practically nonexistent. So while whatever image being projected in front of you might look great, it’s still always a little disorienting not to have a full range of vision. That problem is sufficiently lessened with Maimone’s invention. His hope for this advancement is to make augmented reality less of a gimmick and more of an integral part of life. In an article for the MIT Technology Review he says he would love to use Pinlight Display to have lunch with his wife everyday as if she’s seated across the table (awww) or maybe see the name of a new acquaintance floating next to them when they meet (we totally need that). With a display that more closely mocks our natural vision it’s easy to see how practical a device like this could be.

This headset is in the works, but don’t expect to find it in stores anytime in the immediate future. Currently, the prototype’s biggest pitfall is its low resolution. While you can see more with Pinlight, the image quality is still far below what you’ll find in commercial augmented reality glasses. But after some minor (and major) bugs are fixed, who knows what these babies might be capable of?

What do you guys think of using augmented reality in everyday life? Share your thoughts with us in the comments.

Cortney Clift
Cortney is the senior writer and special projects editor at Brit + Co. She typically covers topics related to women's issues, politics, and lifestyle. When she's not buried behind her computer you'll find her exploring New York City or planning her next big adventure.
Wearable Tech
Tech
Wearable Tech