If You Experience Severe PMS, You May Have This Often Misdiagnosed Disorder 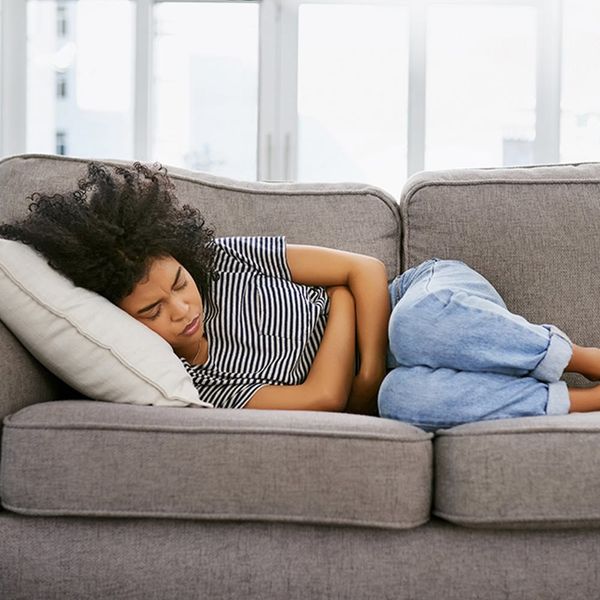 If you’ve ever had a period — or watched a sitcom — chances are you’re familiar with the concept of premenstrual syndrome (PMS), a collection of physical and emotional symptoms that occur in the two weeks right before your period. Called the luteal phase, this is the point in your menstrual cycle when your progesterone levels start to rise. Symptoms of PMS include bloating caused by water retention and/or digestion problems; abdominal cramps; mood swings; headaches; and back pain.

While most people who have periods get some of these, to some extent, five to eight percent experience a much more severe form of PMS called premenstrual dysphoric disorder (PMDD). Unfortunately, it’s often wrongly diagnosed or missed completely. Here are the symptoms to look for, and what to do if you think you have PMDD according to OB/GYNs and people who are living with it.

What’s the difference between PMS and PMDD?

If you think about PMS as a spectrum, PMDD is the most severe and debilitating form. Mary Ibe, an OB/GYN at Detroit Medical Center, explains that the symptoms of both are similar, but they are far more severe in PMDD, to the point where they impact your daily life. A diagnosis of PMDD, she says, means that in the week or two before every period, you experience “five or more of the following symptoms: feeling depressed; feeling tense, anxious or on edge; moodiness or frequent crying; constant irritability and anger that cause conflict with other people; lack of interest in things you used to enjoy; problems concentrating; appetite changes; problems sleeping; feeling overwhelmed; and physical symptoms like bloating and breast tenderness.” These symptoms subside within a few days of starting your period.

While the discomfort and emotional symptoms of PMS are far from a good time, PMDD is another level. Sara McQueen, a PR executive based in Leeds, UK, who was diagnosed with PMDD in 2018, explains, “To me, PMS is pain and emotional feelings, but PMDD is extreme numbness and fear.” She says that within the course of her period, she can go from feeling relatively stable to suicidal: “It’s really confusing to feel quietly optimistic sometimes and suicidal a few weeks later. The change in mood can be really dramatic, and it’s as though my entire body stops working. I can’t feed myself, I can’t sleep properly, but I’m exhausted and my concentration is badly affected.” This is not that dawning realization that you’re crying uncontrollably at a cat video or feeling irritated over something trivial because your period is due tomorrow. This is a clinical condition that interferes with your quality of life.

What to do if you think you have PMDD

First of all, track your menstrual cycle to see if the symptoms are consistently occurring the week or two before your period and ending within a few days after it’s stopped. Your doctor will want to rule out other causes, and doing this will give you strong evidence that what you have is PMDD, and hopefully help you find a treatment sooner.

Secondly, because the symptoms of PMDD come on in a cyclical fashion, once they subside it can feel like you don’t need help or that you’re imagining things. “If you only see someone two weeks after the symptoms, you will always be fine in your appointment, and your brain will tell you that you are making it up for attention,” McQueen cautions. If you’ve experienced these symptoms for three months or cycles or more — even if they then subside — take yourself to a doctor.

Thirdly, when you are with a doctor, don’t be afraid to advocate for yourself. Claire Lavender, an artist based in Newcastle, UK, says, “I think what helped [get a diagnosis] is that I’d already looked into it when I went to the doctor, and had an idea of the treatments available. Don’t play down your symptoms: If you genuinely feel completely overwhelmed, say that — describe the symptoms as severe if they are. It’s more than just mood swings, it’s a really negative headspace. I noticed because a few times at work I got disproportionately upset and stressed and was unable to shake a really low mood for the whole week.”

Unfortunately, PMDD is often written off as a case of annoying-but-normal PMS that menstruating people are supposed to tolerate. But your doctor has an obligation to help you. “Healthcare providers should always be cognizant when a patient complains that their symptoms — physical or emotional — are affecting their quality of life,” emphasizes Patrice Harold, an OB/GYN at Detroit Medical Center. “If you are missing work, avoiding activities, or withdrawing from normal activities, these symptoms can be caused by a serious medical condition that needs to be diagnosed and treated. If the provider is not capable of making such a diagnosis, they should refer this patient to someone who can.”

What are the treatments for PMDD?

Most treatments are focused on the symptoms, — partly because not enough research has been done to work out exactly what causes PMDD in the first place. (It’s thought to be a sensitivity to the sex hormones progesterone and estrogen.) Dr. Harold says that taking an oral contraceptive pill can help reduce the intensity of symptoms, while taking an antidepressant containing a selective serotonin reuptake inhibitor (SSRI) can help treat the intense emotional elements.

In addition, tracking your period is essential, as it gives you a heads up of when to expect the onset of your symptoms so you can manage them. “If possible, I manage my PMDD by planning things around the times I know I’m really low,” explains McQueen. “And it’s a cliche, but keeping up with exercise helps, if possible.” She also strongly recommends counseling: “Otherwise I’d be dumping a lot of rough stuff on my loved ones when really it’s hormones talking.” As well as exercise, Dr. Harold encourages people with PMDD to focus on reducing stress through aids like yoga and to avoid possible dietary triggers including “caffeine, salty foods, fried foods, alcohol.”

People who have periods are often expected to soldier through the worst symptoms. But PMDD is not your typical “period problem,” and you don’t have to put up with it. Both McQueen and Lavender said that being able to put a name to what they were going through helped them better understand and manage the condition. “I was relieved when I found an actual term for it because I thought I was losing my mind,” Lavender says. If you or someone you know is experiencing these symptoms, find a doctor who will listen to you and get you the help you need. Periods are tough enough without suffering through PMDD.

Natasha Lavender
Natasha Lavender is a Londoner living in Chicago, and is fluent in British and American. She writes about pop culture, health, lifestyle, feminism, fashion, and interviews with interesting people, and has previously worked for Good Housekeeping magazine, Buzzfeed, and Hello Giggles. She loves podcasts, running, reading, dogs and cats equally, and peanut butter anything.
Healthy Living
Health
Healthy Living