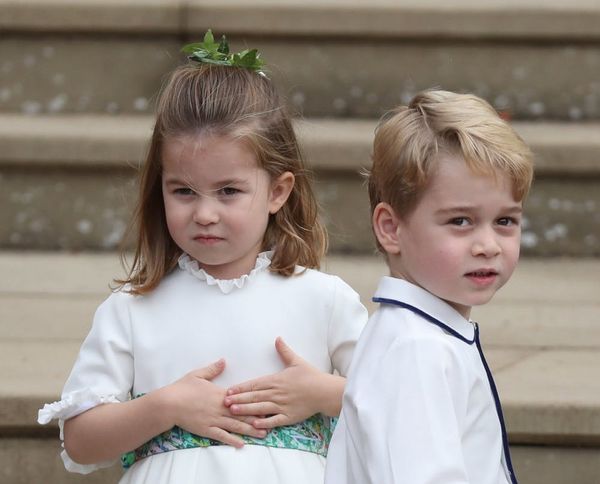 Princess Eugenie married Jack Brooksbank in a royal wedding ceremony at St. George’s Chapel on Friday, October 12, and while the bride and groom were obviously the stars of the show, Prince George and Princess Charlotte made for a couple of pretty adorable supporting players.

George and Charlotte were their most adorable selves serving as page boy and bridesmaid, respectively, in today’s ceremony. Five-year-old George looked dapper in blue trousers, a white shirt with blue piping, and a printed cumberbund, while three-year-old Charlotte wore a white dress with a printed sash and tiny flowers in her hair.

The siblings arrived with the rest of Princess Eugenie’s wedding party, which included Savannah Phillips, Isla Phillips, Mia Tindall, Maud Windsor, Theodora Williams, and Louis de Givenchy. Inside St. George’s Chapel, the group arranged themselves in three rows to follow the bride and her father, Prince Andrew, down the aisle. As they waited, seven-year-old Savannah Phillips pretended to play a horn, making George cover a laugh with his hand.

After the ceremony, the tiny crew made their way back out to the steps, where they posed in front of the crowd of well-wishers and photographers with Eugenie’s parents, Prince Andrew and Sarah Ferguson, as well as the bride’s sister, Princess Beatrice.

Prince George made a few funny faces for the camera, while Princess Charlotte put her perfect royal wave to good use.

Prince Louis, Prince William and Duchess Kate’s five-month-old son, did not attend today’s festivities. Fingers crossed he’ll be able to join his big brother and sister for the next royal wedding!

Did you watch the royal wedding? Let us know @BritandCo!

Desiree O
Desirée O is a ‘Professional Bohemian’ who loves anything and everything related to the arts, entertainment, and pop culture. She ADORES being a ‘Newsy’ for Brit + Co, covering all of the latest tidbits of awesomeness that you want to read about. When she’s not writing, she’s either making messy art, going on long adventurous walks with her camera, or poking around over at bohemianizm (http://www.bohemianizm.com/). You can find out about Desirée O and her work at http://DesireeO.com/ or follow her on Twitter @DesireeO.
Royal Family
Pop Culture
Royal Family Royal Wedding