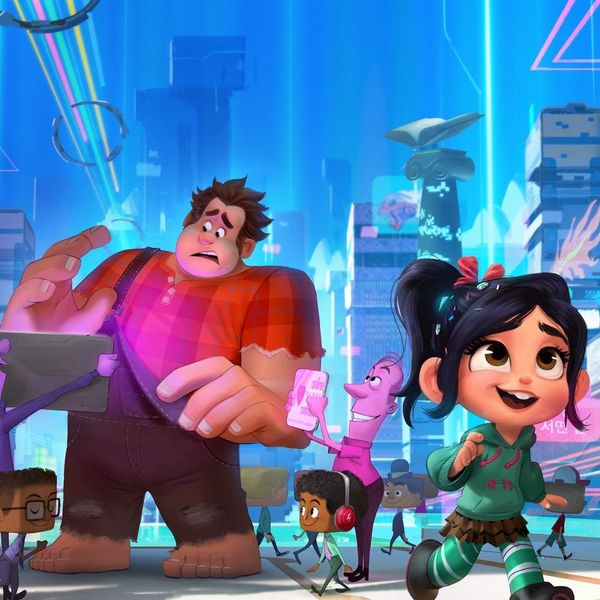 The last we heard about Ralph Breaks the Internet: Wreck-It Ralph 2 was that every single Disney princess was set to appear in the sequel to the 2012 animated movie. And while there’s no sign of those lovely ladies in the first full trailer for the film, this new tease does give us a look at the exciting adventure we’ll be taking when two of our favorite old-school arcade characters take a deep dive into the modern-day online world.

Change can be difficult, as Ralph (John C. Reilly) and his pal Vanellope von Schweetz (Sarah Silverman) find out when their arcade is hooked up to the internet. The two have to battle through clickbait, eBay, and one particular game with an unfortunate bunny-bursting outcome to find one item that’s needed to save everything they know.

“A part in Vanellope’s game Sugar Rush breaks, and in order to preserve that and save the way of life they have in the arcade, they go to this very modern [online] place which is going to put their friendship to the test,” co-director Rich Moore told Entertainment Weekly.

The film’s second co-director, Phil Johnston, added that Ralph and Vanellope react to the internet in their own ways. “Ralph is this older video game character who’s thrust into this world that’s confusing and constantly changing, and we lean into that notion that the internet is different today than it was yesterday, and it will be different tomorrow than it was today,” he explained to EW. “That’s part of the challenge that Ralph, in particular, faces. Meanwhile, Vanellope’s much more equipped to deal with that than Ralph is. She’s younger and more spirited, and he’s sort of a big, oafish doofus who can’t quite handle it.”

While they didn’t make it into the first full trailer, Moore promises that we’ll also be seeing the return of Fix-It Felix (Jack McBrayer) and Calhoun (Jane Lynch), as well as Yesss, a new character voiced by Empire’s Taraji P. Henson.

Will you be seeing Wreck-It Ralph 2 when it smashes into theaters? Let us know @BritandCo!