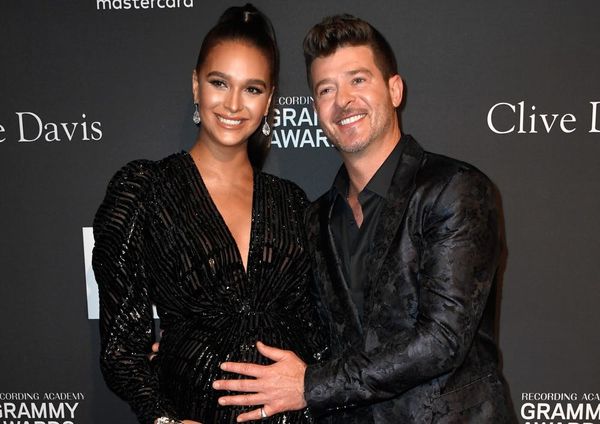 Robin Thicke is a father of three. The singer took to Instagram on Tuesday, February 26, to announce that his fiancée, April Love Geary, had given birth to their second daughter, Lola Alain Thicke.

“Lola Alain Thicke was born this morning 2/26/19 at 8:21 am,” the proud dad captioned a photo of himself holding the newborn. “Thank you God and April Love for this blessing! @aprillovegeary #fatherofthree”

Geary also hopped onto social media to share a photo of herself, Thicke, and their new daughter just after the birth, writing, “My beautiful baby girl, I’m already so in love with you! Your big sister is on her way to meet you.” An earlier post featured a photo of Geary while pregnant, with the caption: “She’s here! And she’s so beautiful.”

While we don’t know for sure, it seems like little Lola’s middle name, Alain, could be in tribute to Thicke’s father, actor Alan Thicke, who passed away in 2016. Although Lola came a few days early, she was originally due to arrive on March 1, which was her late grandfather’s birthday.

Thicke and Geary, who got engaged on Christmas Eve, are already the parents of one-year-old Mia. The singer also shares an eight-year-old son, Julian, with ex-wife Paula Patton.

Congratulations to the growing family on their newest addition!