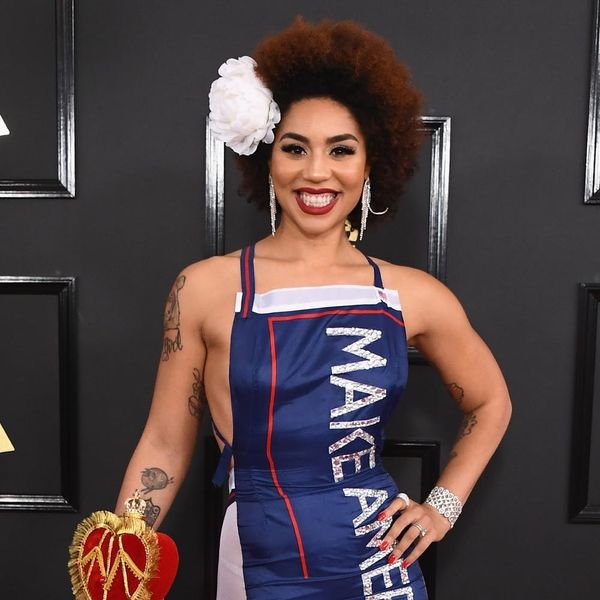 If there was any doubt that tonight’s Grammy Awards would take a cue from the SAG Awards with regards to its politically charged vibes (see the most powerful speeches from that evening here), singer Joy Villa just put them all to rest by showing up on the red carpet in what appears to be a *very* pro-President Trump Andre Soriano dress.

Perhaps in an answer to The Big Bang Theory’s Simon Helberg and wife Jocelyn Towne, who donned refugee protest garb to the SAGs, the Cali-born performer let the world know which side of the “fence” she stood on through her outfit when she disrobed from her all-white robe.

Stripping down to reveal a blue and silver star-spangled dress emblazoned with President Trump’s infamous slogan, “Make America Great Again,” as well as his last name in bold letters at the train, there was no mistaking the message being put forth here, with her heart-shaped clutch added the pop of red she was missing to make her patriotic garb complete.

While we’re not entirely sure whether this was a publicity stunt to get her name out there or if she’s merely feeling SUPER strongly about the GOP RN, one thing’s for sure — everyone will know her name by tomorrow a.m.: In fact, we wouldn’t be shocked if President Trump himself gives her a nod in the form of a Tweet!

What do you think of Joy’s potentially polarizing look? Share with us @BritandCo.

Nicole Briese
Nicole is the weekend editor for Brit + Co who loves bringing you all the latest buzz. When she's not busy typing away into the wee hours, you can usually find her canoodling with her fur babies, rooting around in a bookstore, or rocking out at a concert of some sort (Guns N' Roses forever!). Check out all her latest musings and past work at nicolebjean.com.
Grammy Awards
Celeb Style
Grammy Awards Politics Red Carpet
More From Celeb Style