The Cast of Stranger Things Wins the Emmys Red Carpet 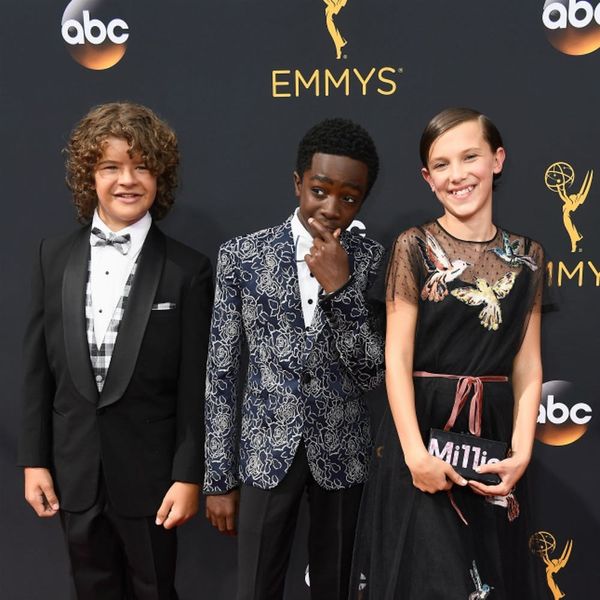 Let’s be honest: The absolute best thing about any awards show is the red carpet coverage. While everyone usually waits with bated breath for the best dressed lists, we’re never expecting an entire cast to just totally steal the whole show. But of course, we never would have guessed that Stranger Things would be as good as it is, nor would we have imagined how much we adore the tiny cast. After slaying on Fallon a few weeks ago, it’s obvious that these kids are here to not only steal our hearts, but also to destroy the red carpet for anyone walking behind them.

Can we please talk about these kids for a second? From L-R we have Gaten Matarazzo looking so dapper in his tux with a plaid vest. In the middle, Caleb McLaughlin is SLAYING those bedazzled loafers and dinner jacket and Millie Bobbie Brown is a vision in her bird applique.

Even Millie’s hair grown out from her “Eleven” shaved head is just darling:

These kids are def having their moment, and even the fact that they look so slick on the red carpet is incredible. Usually, kids don’t have half the swagger that these guys do, which goes to show that they’ve got their work cut out for them on Stranger Things. We’re hoping that having Millie BB doing so much more press means that El isn’t quite gone from the show, and we’re anxiously awaiting season two.

But while we wait, let’s just bask in the sheer perfection of the Stranger Things kids at the 2016 Emmys one more time

Of course Millie’s got a purse with her name on it, and Caleb’s got a young Nick Cannon vibe, no?

What’s your fave look from the 2016 Emmy Awards? Tell us @BritandCo!

Kat Armstrong
Kat has been a writer, social media maven and mom for longer than she's willing to admit. She's also spent time in front of and behind the camera, interviewing celebs, politicians and acting as a producer for fashion and artistic photography shoots. When she isn't writing for various orgs and publications, she's hanging with her kids, husband and French Bulldog, Peter, in Toronto, Canada.
Netflix
Pop Culture
Netflix Red Carpet
More From Pop Culture