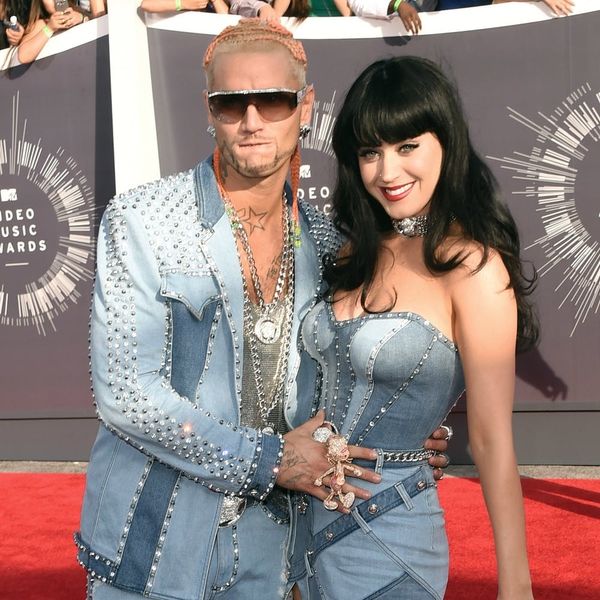 The MTV Video Music Awards are TOMORROW (August 28 at 9/8C bbs!), and if there’s one thing we love to see on the red carpet (besides the seriously amazing outfits, of course), it’s a totally unexpected couple. There have been some doozies over the years, from drama-filled exes like 50 Cent and Vivica A. Fox to blink-and-you-probably-missed-them duos like Kirsten and Orlando, but don’t worry: We’ve rounded them all up for your viewing pleasure below. Behold, seven of the strangest celeb couples to ever grace the VMAs red carpet!

1. Jaime King and Kid Rock: Wha… when… HOW?! It goes without saying that we were pretty much dumbfounded to see Jaime King, the mother of Taylor Swift’s godson, walking the 2000 red carpet with Kid Rock. Again. WHAT? Apparently, the two dated for a time back in the day — guess this was her bad boy phase? Minds. Blown. (Photo via George DeSota/Liason/Getty)

2. Brian McFayden and Nicky Hilton: Though Nicky is now a happily married mommy, in 2002, she was walking the VMA red carpet with… the MTV news host? Yep, that’s then-boyfriend Brian McFayden at the designer’s side, posing for pics and PDA. Even stranger? The fact that Brian was hanging backstage just one year prior with then-girlfriend Mandy Moore. He was clearly a hot commodity in the ’00s! (Photo via Matthew Peyton/Getty)

3. 50 Cent and Vivica A. Fox: 50 Cent shocked the world when he showed up to the 2003 VMAs with leading lady Vivica A. Fox on his arm. The rapper, who famously survived being shot nine times, seemed an unlikely match for a Hollywood starlet, especially one 11 years his senior — but that’s exactly what happened when these two walked the red carpet arm in arm. Their union didn’t last long, and Vivica went on to diss her ex years later on an episode of Andy Cohen’s Watch What Happens Live, where she insinuated 50 was actually gay — a claim the rapper denies, calling her comments “desperate.” Yikes! (Photo via Evan Agostini/Getty)

4. Kirsten Dunst and Orlando Bloom: While this shouldn’t be SO shocking, considering the fact that these two played love interests in 2005’s Elizabethtown, we can’t seem to remember a time pre-Katy or Miranda (or even Kate Bosworth, for that matter!) where this union was a thing. Did we blink and miss it, orrrrrr? (Photo via Evan Agostini/Getty)

5. Andy Dick and Fred Durst: Of all the grown men we might expect to see cuddled up to Andy Dick dressed in drag, we’ve gotta say, Fred Durst wouldn’t exactly be at the top of our list. And yet, here he is, in all his 2001 VMA glory, looking happy as a jaybird as bandmate Wes Borland looks on in amusement. Never judge a book, people! (Photo via George DeSota/Getty)

6. Ashlee Simpson and Ryan Cabrera: My, what a difference a few years can make! These days, Ashlee Simpson is all blonde and polished as the mother of Bronx Mowgli with Fall Out Boy’s Pete Wentz and daughter Jagger Snow with husband Evan Ross, but back in 2004, she was waltzing the VMA carpet with none other than ex-boyfriend Ryan Cabrera, who you might recall also inspired her hit single, “Pieces of Me.” (Photo via Peter Kramer/Getty)

7. Katy Perry and Riff Raff: Though rumors were swirling that this could be the real deal (mostly because Riff Raff claimed to be dating the Katy), we seriously doubt these two were ever an actual couple. More likely, they were acting out a PR stunt to promote their remixed single of “This Is How We Do.” Still, it was a real trip to see the seemingly mismatched pair walking the carpet together in matching denim get-ups that paid homage to Britney and Justin’s infamous 2001 American Music Awards ensembles, no less. Talk about commitment! (Photo via Jason Merritt/Getty)

Which couple do you think made the strangest pair? Tweet us over @BritandCo!

Nicole Briese
Nicole is the weekend editor for Brit + Co who loves bringing you all the latest buzz. When she's not busy typing away into the wee hours, you can usually find her canoodling with her fur babies, rooting around in a bookstore, or rocking out at a concert of some sort (Guns N' Roses forever!). Check out all her latest musings and past work at nicolebjean.com.
Celebrity Couples
Celebrity News
Celebrity Couples Red Carpet VMAs
More From Celebrity News