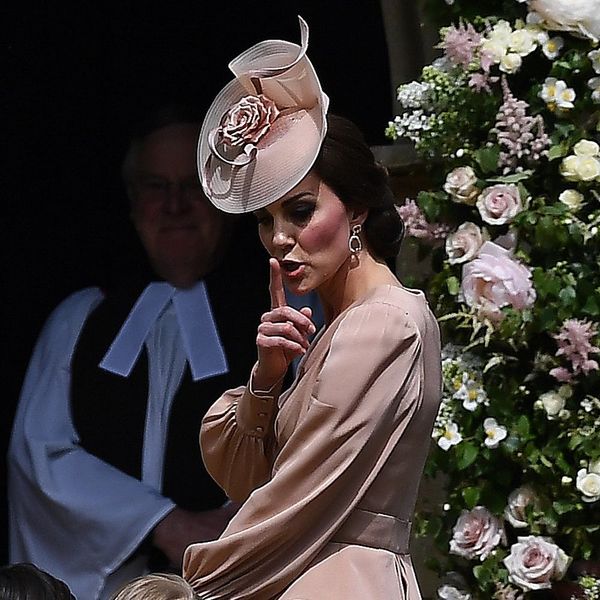 We saw plenty of picture-perfect photography from Pippa Middleton’s lavish wedding yesterday, including shots of her dress from every angle and others that had us flashing back to the royal wedding in 2011. There’s a few snaps in particular that have gone completely viral, however, and not a single one featured the bride. As the “attendant-in-chief,” the Duchess of Cambridge took on the role of munchkin wrangler at her little sister’s wedding, and the candids captured by the paps of her making sure they were on their best behavior have the internet in a tizzy.

While a photo of the 35-year-old shushing the lot of them was fodder enough, it was a shot of her scolding her young preschool-aged son, Prince George, after having run out of patience for his misbehavior that was the real conversation starter. Hiding behind a few bushes, Middleton was snapped doing something every single mother has likely had to do at some point or another: chide her little one for being naughty. The Mirror reports that the prince was running amok and at one point was stomping all over Aunt Pippa’s bridal train when the elder sister snapped.

Well y'all, even the princess loses her sh*t. 😂😂. We need more #mommoments exposed because shoot for some reason this is amazing on a whole bunch of levels...anyone else agree?!

The internet immediately reacted, with parents everywhere all too happy to relate to the trials and tribulations of keeping that many little ones under control.

I'm bloody heir to the throne and you make me carry a bloody wicker basket???? OF COURSE I'M GOING TO HAVE A TANTRUM! You go Prince George pic.twitter.com/pYf8QQDU1e

Others still felt she was under attack, coming to her defense to stick up for their beloved royal.

All over my social media is Kate Middleton telling little George off. She can't even be a Mother in peace 🙄 leave the poor woman alone.

They keep forgetting he is a human and a little boy. #kidswillbekids Prince George's royal tantrum and tearshttps://t.co/WfenySjsjk

No matter what camp you fall into, it’s nice to know the Duchess is human, after all: At the end of the day, royal or not, she’s just a mom like the rest of us parents.

Have you ever had to manage small kids at a wedding? Tell us about it @BritandCo!

Kat Armstrong
Kat has been a writer, social media maven and mom for longer than she's willing to admit. She's also spent time in front of and behind the camera, interviewing celebs, politicians and acting as a producer for fashion and artistic photography shoots. When she isn't writing for various orgs and publications, she's hanging with her kids, husband and French Bulldog, Peter, in Toronto, Canada.
Parenting
Celebrity News
Parenting Royal Family
More From Celebrity News