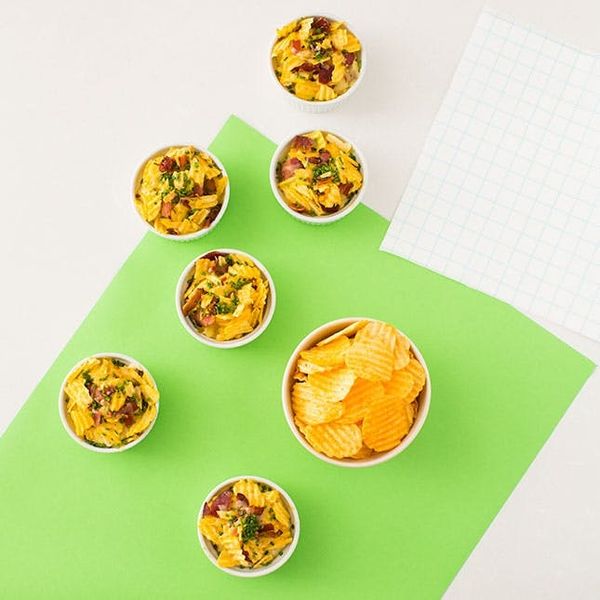 Baked potatoes are amazing. Bake them twice, and your taste buds will thank you. Add some egg whites to step up your taters and make them a soufflé, and you’ve got side dish gold. Today we’re teaming up with LAY’S® Wavy and Chef Jody Denton to make the most flavorful potatoes ever. And come on, who can say no to potatoes topped with potato chips? They add a sensory journey of crunchy to smooth that will light up your palate.

2. In a small sauce pan warm the bacon fat.

3. Whisk in the flour and cook over medium low heat for 5 minutes, stirring frequently to make a roux.

4. Add the milk and raise heat to medium. Stir constantly until the sauce thickens, then stir in 3/4 cup of the cheese and butter until melted. Remove from heat. Allow to cool to room temperature.

6. Mix together the milled potato, sour cream, egg yolk, salt, pepper, baking powder and half of the bacon. Fold the cheese base into the mixture.

7. Fold 1/3 of the whipped egg whites into the base to lighten, then gently fold the remaining egg whites and half of the chives.

8. Pour the mixture into 6-ounce soufflé dishes and bake in a water bath for 30 to 45 minutes until set.

9. In a small mixing bowl, combine the remaining cheese and bacon with the LAY’S® Wavy Cheddar Flavored Potato Chips and place a large mound on top of each soufflé. Then return to the oven with no water bath until the cheese is melted, about 5 minutes.

The very first step is to turn on your oven. Set it to 325 degrees Fahrenheit.

Next, put your potatoes through a food mill with the skins on. You’ll need to cook them first, so either bake or boil them until you can easily poke them with fork.

Add your bacon fat to a small sauce pan and warm it up. Then add your flour, whisking it for five minutes until it forms a roux. Raise the heat, add milk and stir until it thickens.

Add cheese and butter and give it a whirl. Then remove it from the heat and allow the mixture to cool.

Beat your eggs whites in a stand-up mixer until they form stiff peaks.

Now we’re ready to put the soufflés together.

Add the sour cream, egg yolks, half of the bacon, baking powder, salt and pepper to the milled potatoes.

Gently fold in the cheese sauce. Now fold in 1/3 of the egg whites. Then fold in the rest.

Add half of the chives and mix to combine.

Fill each ramekin with the potato mixture and place them in a baking dish. Then add hot water to the bottom of the baking dish, filling it until the water reaches halfway up the sides of the ramekins. Bake for 30-45 minutes until set.

While your potatoes are baking, make the topping. Combine cheese, LAY’S® Wavy Cheddar Flavored Potato Chips and the remaining bacon in a mixing bowl.

Add the topping to the soufflés and then bake for another five minutes or until the cheese melts. Add chives and serve immediately.

Serve these with a roast or some chicken breast and a side of asparagus to get your greens.

From Your Site Articles
Roxy Taghavian
Roxy has been creating and executing DIY projects since her very first trip to Michael's as a child. If there's a project at hand, she'll figure out how to make it. When she's not wielding her hot glue gun, she can be found at the beach, traveling to far off lands, reading and running at her gym "The Panhandle."
Creative Potato Chip Recipes
DIY Recipes
Creative Potato Chip Recipes Side Dish Recipes Sponsored
The Conversation
Reviews:
More From DIY Recipes

Go for the Gold with White Russian Cake Pops