This Is the Point When Cold Weather Become Dangerous 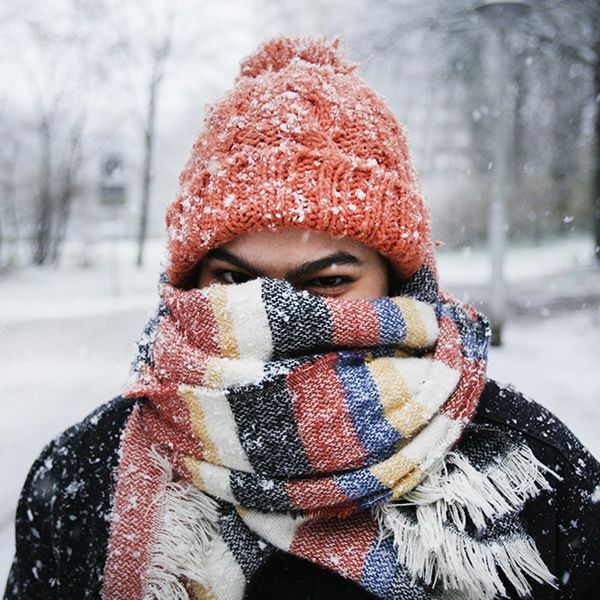 Some people are truly into the winter — and who doesn’t love the part where you get to snuggle up in a cozy sweater with a hot drink after a long day in the snow? But even if you aren’t someone who feels the cold, sometimes the weather can actually get so frigid that it’s dangerous to go out. But when is it too cold, and what should we do to stay safe? Wrap up and read on.

How cold is too cold?

The point at which cold gets dangerous is a higher temperature than you might think, especially if you live somewhere that frequently sees temperatures in the teens or lower. “It’s safe to be outside if the temperature is 32°F or above,” says David A. Greuner, MD, FACS, co-founder and director of NYC Surgical. “If the temperature falls between 13°F and 31°F, you should take breaks from the cold approximately every 20 to 30 minutes. If wind chill temperatures are 13°F and below, you should remain indoors.” Wind chill measures the true danger of weather conditions by factoring in how the low temperature and wind speed combine to remove heat from an exposed human face. To get a better idea, check out this chart created by the National Weather Service. For example, if the ambient temperature is 20°F and the wind speed is a breezy 10 mph, the wind chill is a significantly colder 9°F.

Even worse for us than the wind is water, warns Michael Richardson, MD, a Boston-based family medicine practitioner with One Medical. “During the winter, we try to insulate our body with warm clothes that trap in our heat, but what if that protective layer becomes drenched when we have to slog through the snow, or we trip in a slushy puddle? Wet clothes can lead to a rapid drop in your temperature, as the thermal conductivity of water is roughly 30 times greater than air.” This means water transfers heat away from your body more effectively than air, so you’ll get colder faster. That’s helpful in summer, but in winter, Dr. Richardson cautions, it can be a “fast track to hypothermia.”

Who is most vulnerable?

While 32°F is the limit for most people, some people are extra susceptible to the cold. Dr. Richardson explains, “Most people can get away with going out in the cold if dressed appropriately, but very young toddlers, infants, and the elderly have more difficulty regulating their [body] temperature. If you are going out with your child or an elderly person, you may want to plan ahead to minimize their exposure to the cold.” Janette Nesheiwat, MD, a family and emergency medicine doctor in New York, adds, “Cold injury is exacerbated by dehydration, drinking alcohol, and being ill or if you have an underlying medical disease like Raynaud’s disease, peripheral vascular disease (PVD), and circulatory problems.” If you’re already battling health problems, don’t add cold on top of it!

When does frostbite occur?

It’s most famously associated with Arctic explorers, but frostbite isn’t picky. “Frostbite can occur when a body part isn’t properly protected in the extreme cold,” Dr. Greuner warns. The colder the wind chill is, the quicker frostbite comes on. According to that National Weather Service wind chill chart, if it’s 0°F outside and the wind is blowing at 15 mph, creating a wind chill temperature of -19°F, you’re at risk of frostbite after being exposed for just 30 minutes.

The condition starts slowly and gets gradually worse. “The first symptoms of frostbite are sore, red skin, which is called ‘frostnip,’” Dr. Greuner says. “If you are experiencing these initial symptoms, get indoors immediately!” The extent of the damage is measured in four different degrees — similar to heat-related burns — Dr. Nesheiwat says. The severity of your injury, she tells us, “is determined by the depth of tissue freezing. First-degree frostbite starts when your fingers become painfully cold, may change color to red and then maybe turn grey or blue. You may get tingling and loss of sensation. The worst type of frostbite, the fourth degree, is deeper than the skin, and includes muscle, nerves, and bones, and can sometimes lead to amputation.” In this very advanced stage, Dr. Greuner adds, “the skin becomes very hard and cold to the touch and darkens; [depending on your natural skin color] it may look blue and later turn black.”

What precautions should we take?

If you can, stay inside when it’s below freezing outside — but if that’s not an option, start by dressing the part. In addition to a hat, gloves, scarf, and warm shoes or boots, Dr. Greuner suggests you layer up. “Wear three layers of loose clothing. Your first layer should keep you dry, the second should be made of an insulator like fleece, and the third should be wind- and waterproof,” he says. If you can, he says, take regular breaks from the cold, every 20 to 30 minutes. And if you notice any signs of frostbite, go straight inside.

Unfortunately, it’s not just frostbite you have to worry about. “Avoid strenuous activity, because events like heart attacks occur often in the cold,” Dr. Nesheiwat says. “Pace yourself, stay hydrated, and avoid alcohol because it gives you a false sensation of warmth.” Be aware that the impact of cold can creep up slowly. As Dr. Richardson explains, “Mild hypothermia presents subtly — you become short of breath, your heart beats faster, and you start to shiver. These are all signs that your body is trying to compensate for the cold, so take this as your first warning that it’s time to head indoors for some hot cocoa.” We’ll take one of those too, please.

How do you bundle up against the cold weather? Share your hot tips with us @BritandCo.

Natasha Lavender
Natasha Lavender is a Londoner living in Chicago, and is fluent in British and American. She writes about pop culture, health, lifestyle, feminism, fashion, and interviews with interesting people, and has previously worked for Good Housekeeping magazine, Buzzfeed, and Hello Giggles. She loves podcasts, running, reading, dogs and cats equally, and peanut butter anything.
Winter
Health
Winter Womens Health
More From Health