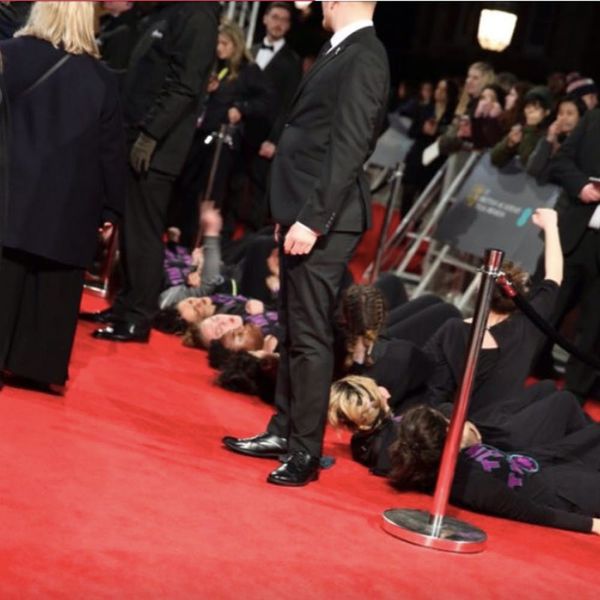 A group of protesters from the advocacy organization Sisters Uncut stormed the red carpet of the BAFTA awards in London on Sunday, laying down in the entrance way just moments before Prince William and the Duchess of Cambridge arrived.

So…this happened today at the #EEBAFTAs ! Looks like it’s a protest against Theresa May! It happened so quick!! pic.twitter.com/yQVwtUtBPT

The protesters wore “Time’s Up Theresa” T-shirts and chanted “The DV bill’s a cover-up, Theresa May your time is up.” Then they lay down on the carpet and linked arms, a symbol, they said, for the “survivors locked up in prison, locked out of refuges, and locked into violent relationships.”

Many of the star-studded event’s attendees passed by a mere 10 feet away. Most wore black to show their solidarity with the Time’s Up movement that has been sweeping the film industry. Eventually, the protesters were moved off the carpet by security — just in time for Kate and William to stroll by.

In an editorial published in the Guardian on Monday, representatives of the group explained that the direct action at the BAFTAs was motivated by a desire to shed light on cuts made to programs that provide support services across the UK to victims of domestic violence.

There is actually a domestic violence and abuse bill on the table in the UK right now, but Sisters Uncut says that the bill is focusing its attention on the wrong strategies. Instead of funding refuges, the bill is focused on tougher sentences and more convictions, which the sisters say can criminalize survivors while forcing them to remain in unsafe situations.

“Instead of using this opportunity to strengthen support for domestic violence survivors fleeing abuse, writes Sisters Uncut, “the government intends to pump further powers into prisons and policing.” The policy, if passed, would include amplified penalties for abusers and the appointment of a Domestic Violence and Abuse commissioner.

British authorities have cut spending on domestic violence refuges by 24 percent since 2010, reports Broadly, and two women in England and Wales a week are murdered by their current or ex-partner.

“We felt very strong and unstoppable,” protester Rosa Carlo told Broadly. “We were carrying the two women murdered a week in our hearts and minds. We had a lot of conviction, and we were ready to go.”

Lia Grainger
Lia Grainger is a freelance journalist and reluctant nomad who divides her time between Canada and Spain, weather dependent. She's written for The Atlantic, Reader's Digest, the Toronto Star and other print and online publications, and her work appears in dozens of languages around the world.
Awards Shows
Current Events
Awards Shows
More From Current Events