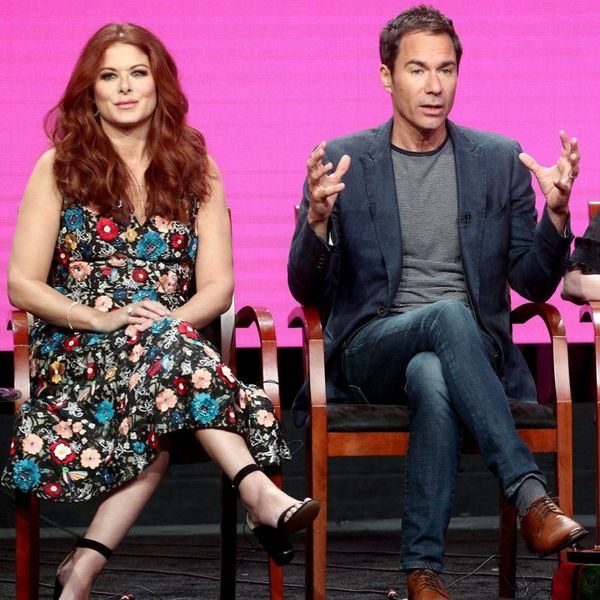 Will & Grace was a groundbreaking series when it debuted in 1997, and the revival coming to NBC this fall will be no different. At the 2017 TCA summer press tour, the cast and creators assured fans that they will continue to bring their distinct brand of comedy to the revival — but it will definitely be Will & Grace for today’s world.

The revival grew out of the election video the cast made last fall, which revealed that Karen (Megan Mullally) is a Donald Trump supporter, something the show is going to touch on when it returns.

“I think we’re lucky that we have this built into the show, that we have a Trump supporter that’s inside this group,” said co-creator Max Mutchnick.

“One of the hardest things we’ve all had to deal with is realizing that some of the people around us didn’t vote for who we voted for and they might have been friends; they might still be friends. How are we maintaining that friendship?” star Eric McCormack added. “That’s going to be the conversation. It’s not inherently about the politics of today, it’s the politics of friendship and how you navigate that, and it can be quite hysterical, how you navigate that.”

But the show isn’t going to turn into some kind of political news show. It’s still “quintessential Will & Grace,” as star Debra Messing said.

“We’re writing our characters. You can’t write a sitcom about concepts or ideas. Characters live in the world, they have opinions… and to that extent it reflects the culture,” said co-creator David Kohan. But the show won’t be making commentary simply for the sake of making commentary.

Either way, coming back to Will & Grace was “a no-brainer” for the cast members. Messing said the first table read “felt like coming home,” and McCormack added that the response they’ve seen from fans and critics alike has been so overwhelmingly positive that they all kind of said, “Why would we not do this again?”

The one thing fans have wondered about, however, is what the creators are going to do about the events of the series finale, which flashed forward to reveal that Will and Grace’s children meet in college and get married, and Jack and Karen are living together with Rosario. The co-creators say that that flash-forward doesn’t necessarily have to affect the revival.

“That was more or less a fantasy, it was a projection into the future,” said Kohan. “I also think that one of the things, when we talked about bringing this back, was what was it that we missed? And I think what we missed was the dynamic between the four of them more than we missed the possibility of seeing what their lives would be like as parents.”

Mutchnick added that they spent a lot of time figuring out what things from the finale are or are not going to be in the revival.

“We spent the most time in story camp figuring out what would be the best way to tell the audience exactly where they are at and what they are up to at this time,” he explained. “We think we came up with the right way to do that. We just want to hold off on telling you exactly what that is because it will take away some of the fun.”

What they can reveal is that the characters “haven’t been living together for the entire time that we haven’t seen them,” but for the revival, it is certain circumstances that are “bringing them together again.”

The Will & Grace revival, which NBC just renewed for a second season, premieres Thursday, September 28, at 9pm ET/PT on NBC.

What other shows would you like to see revived? Tell us @BritandCo.