Why More Women Are Embracing the Side Hustle 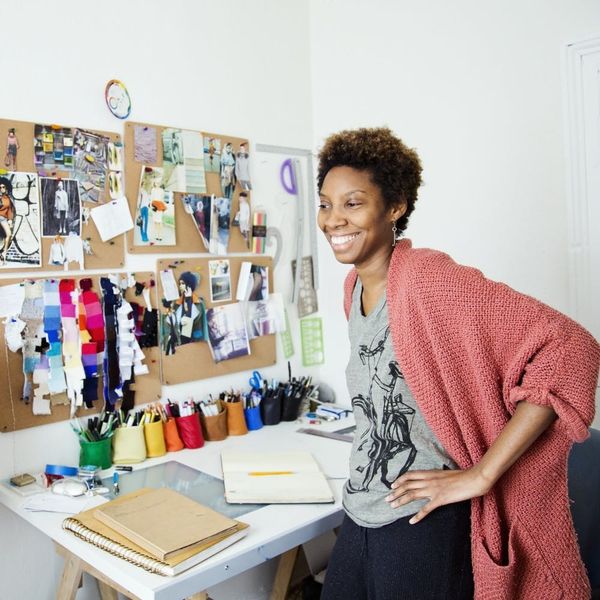 We know having a side hustle is good for your career, but there are a ton of other reasons to start up a second business or freelance on the side. Some of us take on an extra job for the cash, others to pursue a lifelong passion, have flexibility, or all of the above. But, according to a new study by payment platform Hyperwallet, a key factor driving women toward gig work is the prospect of earning equal pay. According to the survey, 86 percent of women feel they’re more likely to make the same amount of money as men through self-employment.

In the early 1900s, war pushed women away from the home and into the workforce. Similarly, the gig economy is giving women another avenue to lead the labor market. Hyperwallet set out to study the rise of women in male-dominated industries. “It struck me that many more women drive for Lyft or Uber and deliver for DoorDash than would drive taxis or deliver pizza, for example,” says Jennifer Bond, SVP of Marketing for Hyperwallet. We talked with Bond to understand what this emerging industry looks like and what it means for you.

WHAT IS A GIG, ANYWAY?

Think of a gig as a no-strings-attached relationship that can range from short-term projects to permalance (permanent freelance) situations. Some examples include becoming an Airbnb host, taking on assignments through Upwork, and doing direct sales with Stella & Dot. You tend to decide how much you work — and thus how much you make — and the company doesn’t have to give you insurance or other full-time benefits. For most women, these gigs are a side hustle, something they do in addition to a FT or PT job. The report shows that only 24 percent of women depend on gigs as their only source of income. But 61 percent of us would like to leave our positions to focus on our side hustle.

WHERE THE GIRLS AT?

Hyperwallet interviewed 2,000 female gig workers and found that the majority have completed some college and are between the ages of 18 and 35. “We have a generation of digital natives that took to the environment very naturally, as it supports their desire for a more flexible approach to earning,” Bond shares. “They value the opportunity to work in a manner that suits their own schedule and priorities — something that is far more important to millennials than to previous generations.” Most of these young workers pursue gigs through professional freelance sites like LinkedIn’s ProFinder, followed by direct selling, and working through service platforms.

THE PERKS OF BEING A GIG WORKER

Flexibility is the primary motivation here, with 96 percent of women noting the hours as the main incentive. This ties directly to the figure that shows 70 percent of female gig workers are the primary caretakers in the home. “Women still bear most of the child-care, elder-care, and home management load,” says Bond. “So anything that gives them flexibility to juggle those responsibilities is attractive.” Another draw? The built-in clientele and lower stress levels. “Because the platforms provide the network-effect of work opportunity, women no longer have to spend months or years building up their own networks in order to have adequate access to work,” Bond adds. The survey reveals there are deeper issues at play too. “I was most surprised at the finding that women feel they are more likely to earn equal pay to men as a gig worker compared to a traditional nine-to-five,” she says.

SO, WHAT’S THE CATCH?

Anyone who has ever freelanced knows the inconsistent nature of gig work is a major deterrent, as is the lack of insurance, tax help, and feeling like you’re in an isolated bubble a lot of the time. Although women believe they are more likely to make as much money as a man in this market, they also feel biases still exist. Among the ladies interviewed, 33 percent said they use pseudonyms either to seek anonymity or avoid sexism. “It’s important for gig platforms to understand the needs of their workers,” says Bond. Hyperwallet will soon debut tax, legal, and online medical services, which companies can offer their contributors.

THE FUTURE OF THE SIDE HUSTLE

Gig work is not a passing fad. Only 11 percent of women said they would be doing it for less than a year. Most plan on sticking it out for more than five years, and the majority of women want to leave their primary job to pursue the side hustle full-time. As companies look increasingly to freelance talent and the gig economy grows, we can expect to see agencies like Hyperwallet step up to address the shortcomings, making the dream of working for yourself full-time more realistic and convenient than ever.

Do you have a side hustle? Tell us what you do @BritandCo!

From Your Site Articles
Stephanie Granada
Stephanie Granada is a freelance writer and editor, who splits her time between Colorado, Miami, and NYC. When she's not locked down in research-mode, reporting a travel story on the road, or identifying areas to bolster the Hispanic community, you'll find her playing outside, working out, or hiding out with a book. Happiness to her is hiking up a mountain, swimming in a beach of her native Colombia, powering through a hellish boxing class, or getting lost in a story with a glass of something delicious — preferably whiskey — in-hand.
Girlboss
Work
Girlboss The Art of the Side Hustle
More From Work