11 Most Bonkers Moments from the Kavanaugh Hearings (So Far) 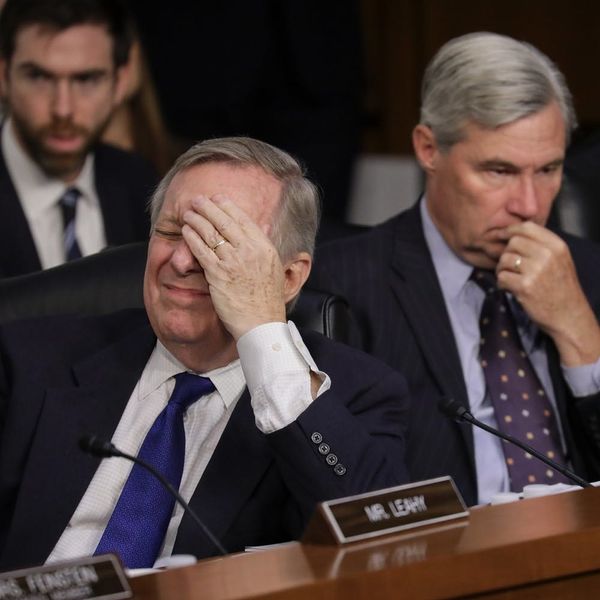 This week, the Senate Judiciary Committee has begun hearings for Judge Brett Kavanaugh’s nomination to the Supreme Court. And while disagreement is rampant, there’s one thing politicians and onlookers from across the aisle can agree on: We’ve never seen anything like this before.

What we’re seeing is widely being called unprecedented by senators involved, journalists and spectators, in terms of the partisanship, contentiousness, and defiance of norms and rules on the Senate floor.

Kavanaugh, a judge on the Court of Appeals for the DC Circuit, is widely opposed by proponents of reproductive rights, LGBTQ+ rights, labor rights, civil rights, immigration rights and gun safety, and boasts the lowest approval rating for a SCOTUS nominee in decades. His approval rating is particularly low among American women at 28 percent, compared with 47 percent for men.

Despite Kavanaugh’s unpopularity, as well as concerns about his previous statements suggesting that a sitting president can’t be indicted, and the withholding of more than 100,000 pages of documents from his service in the Bush White House, the narrow Republican majority in the Senate is certainly to his advantage. Nonetheless, Senate Democrats have made it clear they’re prepared to fight, and Senators Kamala Harris, Cory Booker, Mazie Hirono, Dianne Feinstein and others on the Judiciary Committee have emerged as leaders in this fight.

From releasing emails marked “confidential” by the Judiciary Committee, to citing how many women could die without Roe v. Wade, to heated protests on the Senate floor, the past few days have seen Democrats and activists in the fight of their lives — and, arguably, for the lives of many marginalized people in the US. They’re holding nothing back, and amid the chaos that’s ensued, this couldn’t be clearer.

Here are some of the most standout moments from the hearings so far.

1. Protesters — including senators — call the hearings a sham, with some facing arrest. On the first day of the hearings, protesters, many expressing concern about what Kavanaugh’s confirmation could mean for the future of abortion access in the US, repeatedly interrupted the hearing and called it a “sham.” One Roll Call reporter has even provided shocking numbers for how many protesters have been arrested: 70 protesters arrested on Tuesday, 73 on Wednesday and 69 on Thursday. Additionally, Sen. Harris interrupted chairman of the Judiciary Committee Sen. Charles Grassley as he began the hearings, stating the Committee could not “possibly move forward with this hearing,” in light of the thousands of unreleased pages of Kavanaugh’s record. The sentiment has been echoed by many Senate Democrats. Despite their vocal objections, it has moved forward nonetheless.

2. Kavanaugh turns away the father of a Parkland victim. In one of the most controversial moments of the first day of hearings Fred Guttenberg, the father of a Parkland shooting victim and guest of gun control advocate Sen. Dianne Feinstein, introduced himself to Kavanaugh and asked for a handshake. Kavanaugh appears to refuse the handshake and walk away from him in now-viral video footage of the exchange, which the Trump White House has said is being taken out of context. Amid a series of mass shootings in recent months, Kavanaugh’s stances on gun control are under particular scrutiny, but his rejection of the Parkland father’s handshake has understandably sparked an intense emotional reaction.

3. Is Roe v. Wade settled law? On Wednesday, following a tense exchange about assault weapons, Sen. Feinstein repeatedly questioned Kavanaugh on his stance on Roe v. Wadeand abortion rights. Notably, Feinstein refused to accept his answer identifying Roe as a “settled issue,” in light of how the Supreme Court has overturned precedent on numerous occasions before.

Additionally, Feinstein brought up a crucial, harrowing statistic from the pre-Roe world: 100,000 to 1.2 million unsafe abortions, resulting in unsaid numbers of deaths, happened annually in the US in the 1950s and ‘60s prior to Roe. And as Feinstein put it, Roe has allowed American women to “participate in the economic and social life of the nation.” The issue of abortion and reproductive rights has been brought up by numerous Senate Democrats, including Harris, Hirono, Sen. Richard Blumenthal, and Sen. Dick Durbin, and is likely one reason for Kavanaugh’s exceptionally low approval ratings among American women.

4. Do immigrant women have the right to abortion? In a pointed question referencing Kavanaugh’s one decision on abortion rights, in which he sided with the Trump administration’s right to block a detained immigrant woman from accessing abortion, Hirono asked Kavanaugh point-blank, “Do you think that that is an open question as to whether or not alien minors, or in fact aliens in our country, have … a constitutional right to an abortion?”

Kavanaugh declined to give a substantive answer, simply stating that those in America have Constitutional rights. Because Kavanaugh’s record on abortion is limited to this one ruling, his praise for the dissent in Roe v. Wade, and, as of Thursday, a leaked 2003 email where he argued that Roe actually isn’t settled law and could be overturned quite easily, reproductive rights advocates cite it often as a point of grave concern.

Prior to Hirono’s question, Sen. Durbin brought Kavanaugh to task over the faulty arguments he used to justify his decision in the aforementioned Jane Doe case, pointing out that the undocumented minor in question did not need a guardian or sponsor to have an abortion because she had received judicial bypass. Because Jane Doe was a minor, Kavanugh’s decision is even more controversial among advocates.

5. Where does Kavanaugh stand on sexual harassment and domestic violence? On Tuesday, Kavanaugh was introduced to the Senate by a self-identified “liberal feminist” lawyer, and on Wednesday, Sen. Orrin Hatch talked up Kavanaugh’s record of hiring many female clerks. But Hirono has brought up allegations that Kavanaugh was aware of his former boss Judge Alex Kozinski’s record of alleged sexual misconduct, and like others in Kozinski’s inner circle, helped cover up the allegations, in direct contrast with Republicans’ glowing feminist portrayal of Kavanaugh.

When asked about the allegations against Kozinski by Hirono on Wednesday, Kavanaugh stated he had not witnessed the incidents in question. Asked whether he believed the women, he responded, “I have no reason not to believe them.” When asked about his knowledge of allegations of domestic abuse against former White House secretary Rob Porter, whom Kavanaugh had recommended, he offered a similar answer. Prior to the hearings, pushback against Kavanaugh’s anti-women record has focused largely on his stances on reproductive rights. These questions from Hirono could potentially bring his questionable stances on sexual misconduct and violence against women into the dialogue as well.

6. Where does Kavanaugh stand on racial justice issues? On Wednesday, Sen. Booker and Kavanaugh engaged in a particularly heated exchange about issues of affirmative action, discrimination, and racial injustice, as Kavanaugh repeatedly refused to indicate his personal views and cited only precedent. Advocates have pointed out his track record of opposing affirmative action, and calling for “race-neutral” policies. Kavanaugh’s track record also includes upholding restrictive voter ID laws correlated with suppression of minority vote, while he has also expressed support of broadening powers for police, which is often disproportionately to the disadvantage of people of color.

7. Were “both sides” to blame at the Charlottesville riots? In the vein of gauging where Kavanaugh stands on racial justice, Sen Kamala Harris asked Kavanaugh if he shared the president’s view that “both sides” — white supremacist protesters and counter-protesters — were to blame for violence in Charlottesville last year. Kavanaugh ultimately declined to answer, citing “independence of the judiciary,” but the question was one of the most direct — and surprising — of the hearings so far.

8. “Can you name a law that allows the government to control the male body?” Following up one controversial question with another, Harris on Wednesday asked Kavanaugh point-blank if he could “think of any laws that give government the power to make decisions about the male body.” If there’s one thing the hearings for Kavanaugh have not been, it’s quiet — but her question brought on a few seemingly endless moments of silence before Kavanaugh was able to respond. After some back-and-forth, he responded that he was not “aware of any” at that time, seeming to prove Harris’ point that restricting access to abortion, or ruling in favor of blocking detained immigrant women from having abortions, as Kavanaugh has, mark an issue of distinctly gendered control.

In another telling moment on Thursday, Kavanaugh referred to hormonal birth control as “abortion-inducing drugs,” demonstrating what was either shocking ignorance or advancing an extremely dangerous myth used by far-right politicians to restrict access to birth control. This particular mix-up has sparked intense outrage among feminist advocates and politicians.

9. Has Kavanaugh spoken with Trump’s lawyers about the Mueller investigation? Harris also brought Kavanaugh to task about whether he has played any role in working with President Trump on special counsel Robert Mueller’s investigation into the 2016 presidential election, in a heated eight-minute exchange. The questions appeared to stump Kavanaugh, and in response to his hesitation, Harris suggested that he was “thinking of someone” and didn’t “want to tell” the committee.

A Democratic aide has told TIME, “We have reason to believe that a conversation happened and are continuing to pursue it.” In light of Kavanaugh’s suggestion that the president can pardon himself and also cannot be indicted, Democrats have repeatedly expressed concerns about how his confirmation to the Supreme Court could impact the investigation. Harris’ questions about Mueller were a particularly shocking moment in the hearings, underscoring the unprecedented nature of how Kavanaugh’s confirmation could affect the presidency.

10. Cory Booker releases telling emails marked “confidential” to the public. Early Thursday, in truly dramatic fashion, Sen. Booker released emails marked “confidential” by the committee to the public. This included emails in which Kavanaugh appears to argue against Roe as “settled law,” although Booker placed emphasis on emails in which Kavanaugh appeared to support some racial profiling in airport security.

Subsequently on Thursday, Sen. Hirono released emails showing Kavanaugh debating whether Native Hawaiians should have equal protections as other Native American tribes, and Sen. Feinstein read aloud the “confidential” email in which Kavanaugh disputed Roe as “settled,” demonstrating levels of defiance against the nomination of a Supreme Court justice we’ve never seen before.

11. Where does Kavanaugh stand on marriage equality? Finally on Thursday, after much focus on issues of women’s rights, civil rights and gun safety among senators, Sen. Harris asked whether Kavanaugh supported the landmark decision on marriage equality, Obergefell v. Hodges (2015). After some back-and-forth, in which Kavanaugh cited a quote from Justice Kennedy that the “days of discriminating against gay and lesbian Americans or treating gay and lesbian Americans as inferior in dignity and worth are over,” despite how more than half of LGBTQ+ people report experiencing sexual harassment, discrimination and even violence as of last year, Kavanaugh ultimately declined to give a yes or no answer.