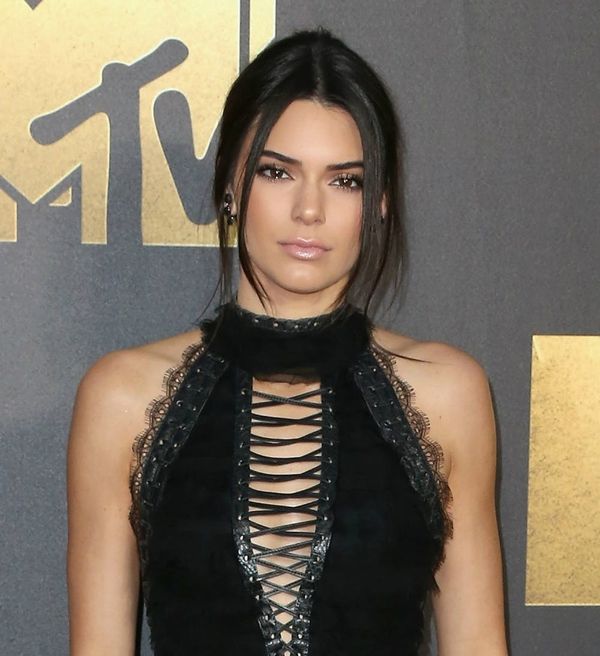 The MTV Movie Awards will air tomorrow night (8/7c), and while we’re super stoked to see what antics hosts Kevin Hart and Dwayne “The Rock” Johnson and performers Halsey and Ariana Grande have in store for us, we’ve been even more excited to see if Hollywood can top some of the show’s most infamous carpet looks to date. We just had to know if someone would take avant garde to the max and wear a dragon as a dress à la Bai Ling in 2015? Or if they would keep things simple and chic, like Brittany Snow did in her two-tone column dress last year? Lucky for us (and you!), we don’t have to wait to find out— we’ve got a sneak peek look at all the red carpet fashion you can handle. Hint: your fave stars TOTALLY delivered. See for yourself — the proof is all here below!

1. Keltie Knight: Is that Insider co-host Keltie Knight or Punky Brewster? That super high pony makes it kinda’ hard to tell! Rockin’ an Oriental patterened mini over some Victorian sheer black tights, this is a mish-mash of an outfit, to say the least. (Photo by Frederick M. Brown/Getty)

2. Michael J. Willett: The MTV Faking It star refused to let the ladies have all the fun — his Hawaiian-print suit was a showstopper of epic proportions. (Photo by Frederick M. Brown/Getty)

3. Farrah Abraham: Farrah may not be a movie star, but she sure did look the part tonight in this dazzling beaded gown with bright red lips and LLL: long loose locks. (Photo by Frederick M. Brown)

5. Carrie Keagan: In one of the night’s more interesting getups, TV personality Carrie Keagan wore a black and white pantsuit with a cage overlay. Her rock’n’roll pompadour was also very evening-appropriate —it was, after all, once an all music channel! (Photo by Frederick M. Brown/Getty)

6. Battie Winkle: If you didn’t know Youtube sensation Battie Winkle’s name before tonight, you certainly will after seeing her in this hot pink sequin suit with platform sneakers. *Casually* adding a stole fur and a red tie to the mix, she’s pretty much unforgettable. (Photo by Frederick M. Brown/Getty)

9. Lizzy Caplan: Looking like a modern-day flapper, Lizzy Caplan threw it back to the roaring ’20s tonight, complete with wavy bob. While there’s a lot going on with this Sally LaPointe piece (sequined body with peek-a-boo skirt and halter neckline), it all comes together rather nicely for the Masters of Sex star. (Photo by Frederick M. Brown/Getty)

10: Jessica Chastain: This darkly romantic Givenchy frock worn by Jessica Chastain was all beads and lace and smoldering eyes and the results were truly mesmerizing (Photo by Frederick M. Brown/Getty)

11. Charlize Theron: In a bit of a departure from her more feminine red carpet picks, Charlize gave us a bit more edge than we’re used to seeing from her, rolling all the year’s hottest trends into one Alexander McQueen outfit (Read: plunging neckline, sheer cutouts, high-waisted undergarments). Could it be that she’s channeling her inner Mad Max badass?

13. Kendall Jenner: Gigi’s bestie Kendall was also breathtaking in this masterpiece of a velvet and sheer-back Kristian Aadnevik dress, making her look just as good going as she did coming. The criss-cross bodice paired perfectly with her up-to-there gladiator heels, and her sectioned off pony was not to be sniffed at, either. (Photo by Emma McIntyre/Getty)

14: Cara Delevingne: Cara continued the reign of the models in this Balmain velvet pantsuit with strategically placed cutouts. (Photo by Frederick M. Brown/Getty)

Which look was your favorite? Let us know at @britandco!

Nicole Briese
Nicole is the weekend editor for Brit + Co who loves bringing you all the latest buzz. When she's not busy typing away into the wee hours, you can usually find her canoodling with her fur babies, rooting around in a bookstore, or rocking out at a concert of some sort (Guns N' Roses forever!). Check out all her latest musings and past work at nicolebjean.com.
Red Carpet
Style News
Red Carpet