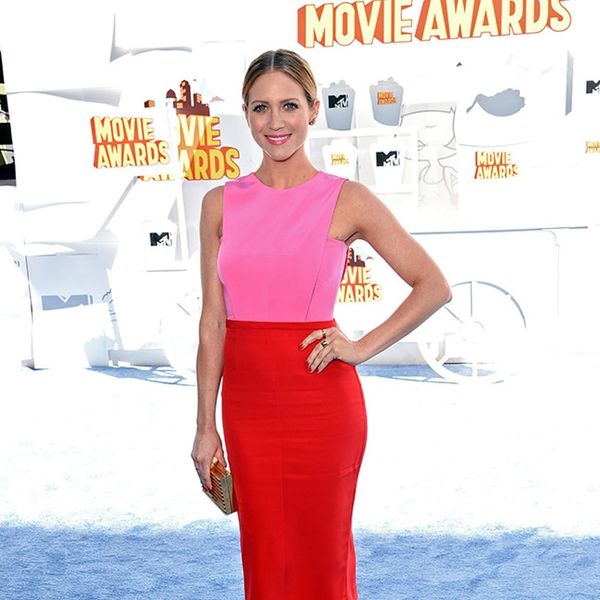 Unlike some of the ultra-glam awards shows that happen earlier in the year, the MTV Movie Awards are known for turning out fresh, on-trend looks with bold colors and unexpected patterns you can actually wear IRL, which is what ultimately makes watching the blue, yes, blue, carpet so appealing. This year celebs didn’t disappoint, giving us plenty to ogle, from jaw-droppingly low cutouts to enviable accessories and even a few WTF moments (Bai Ling’s dragon top, anyone?). We’re sharing some of our favorite looks from the night, plus 14 similar styles so you can make them your own.

1. ASOS Cape in Pastel Check ($135): Charli XCX inspired us to be a little bolder when it comes to our outerwear (and shoe choices for that matter). This pink plaid cape coat nails it with a bright color and fashion-forward style. (Photo via Jason Merritt/Getty)

2. Adelyn Rae Strappy Wide Leg Jumpsuit ($104): ScarJo was giving us serious wardrobe envy with that bomb pink jumpsuit and turquoise clutch combo. Recreate her look for your next night out, adding on a metallic belt for a modern, polished edge. (Photo via Jason Merritt/Getty)

3. Cameo Killing Vibe Dress ($150): Diggin’ that whole space-age-meets-’60s-mod thing Holland Roden was rocking at the awards? Us too. This version by Cameo has a more flirty, feminine vibe with oversized florals and a high neckline. (Photo via Jason Merritt/Getty)

4. Style Stalker Crossroads Cutout Dress ($160): It seemed like celebs were seriously ready for warmer weather, with a lot of bold bare-it-all cutouts making an appearance on the carpet. Love the look but don’t want to go quite as daring? This sassy navy number has a mesh bodice and high neckline that help to balance out the sassy skin-bearing panels. (Photo via Jason Merritt/Getty)

5. ASOS ’90s Style Overalls ($81): Overalls on the red, er, blue carpet? Heck yes! Bea Miller’s eye-catching black and white getup was a living ode to the ’90s, and we loved every minute of it. Rock a similar pair with a pair of round sunnies and classic tee for your next off-duty look. (Photo via Jason Merritt/Getty)

6. Mango Geometric Clutch ($70): Polished minaudieres were by far the bag of choice last night, and we don’t mean your run-of-the-mill black clutch either. Funky geometric shades, vibrant patterns and glam metallics reigned supreme, taking the carpet by storm. Elevate your next night-out ensemble with a sleek futuristic convertible clutch. (Photo via Jason Merritt/Getty)

7. Reformation Maggie Dress ($198): Spencer Grammer’s free-wheelin’ floral frock had Coachella written all over it, setting her apart from the contemporary glam looks that dominated the red carpet. This light airy look-a-like is perfect for date night or laid-back weekend strolls. (Photo via Jason Merritt/Getty)

8. Pixie Market Black Cape Dress ($69): An LBD with a built-in topper is an idea we can totally get behind. No need to worry about that jacket slipping off your shoulders and cramping your style, this winged-look ensures you’re always looking fly. (Photo via Rich Polk/Getty)

9. Missguided Leona Cut Out Crop Top ($30): Brittany Snow’s color-block getup was perfectly polished, but the vibrant pink and red hues kept her outfit feeling fresh and fun. We love this look for on-duty and off. (Photo via Jason Merritt/Getty)

10. Steve Madden Villano Gladiator Sandal ($100): Gladiators are one of the most sought-after shoe styles this season, and we loved Hailee Steinfeld’s take on the centuries-old style, pairing them up with chic separates instead of taking them down the boho route. (Photo via Jason Merritt)

12. Topshop Floral Print Pinafore Overlay Dress ($90): As one of spring’s hottest dress trends, it’s no surprise that a popover style made its way onto the red carpet. For a more carefree style you can rock off-duty, this not-so-subtle floral number is the way to go. (Photo via Alberto E. Rodriguez/Getty)

13. AQ Plunge Neck Shift Dress in Crystal Print ($45): While attention-grabbing silhouettes and statement-making prints aren’t usually a recipe for sartorial success, last night proved the two can work together seamlessly if the patterns are kept light and intriguing. (Photo via Rich Polk)

What was your favorite look from the night? Tell us in the comments!

Libby MacCarthy
Libby MacCarthy is an urban planner turned writer with a love (bordering on unhealthy obsession) of all things fashion and beauty related. She lives for perfectly brewed coffee, farmer's markets, dinner parties and perusing impeccably designed boutiques. When she's not on the hunt for the latest trends, you'll likely find her plotting her next adventure or nose deep in a book. Libby currently splits her time between the East Coast and her adopted home of France. Follow her daily adventures on Instagram.
Celebrity Style
Fashion
Celebrity Style Get the Look Red Carpet
More From Fashion