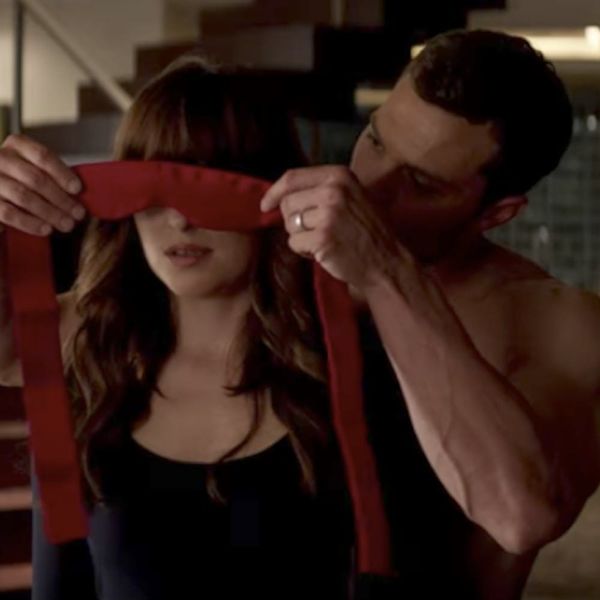 When we got our first heart-stopping look at the upcoming Fifty Shades Free flick back in September, there were glimpses of car chases, guns, and a potential kidnapping to speculate over. Now, the first full-length trailer has finally arrived, and though we didn’t think it possible, we’re even more intrigued.

The clip sees a newly married Anastasia Steele (Dakota Johnson) and Christian Grey (Jamie Dornan) embarking on their new chapter as husband and wife. Christian surprises his bride with a beautiful new dream home he had built for her, but when the home’s architect is a little too hands-on with Christian, Anastasia is having none of it, asking that she “please stop speaking to my husband as if I weren’t here.” The woman replies with a patronizing “Ana,” but Anastasia’s not backing down, quipping, “You may call me Mrs. Grey.” Meow!

That’s not the only drama brewing, either: Ana’s old boss Jack has returned seeking revenge, and Elena (Kim Basinger) is also still around, surely stirring up trouble. Even more concerning, though, is the someone that’s trying to run the couple off the road in a dramatic car chase.

From there, things start to happen in the blink of an eye, with Christian punching someone and BOTH Mr. and Mrs. Grey packing heat. In fact, it appears as though the film is packing in as much in as it can for what’s cheekily being called, “the final climax.”

The only bad news is that the film won’t be out until Valentine’s Day 2018, a whopping three months away. The good news, however, is that series author E. L. James has revealed a new book, Darker: Fifty Shades Darker as Told by Christian, to tide fans over in the meantime, with a release date of November 28!

Happy reading, and in the meantime, check out the full Fifty Shades Freed trailer below.

Will you go see the Fifty Shades Freed in theatres? Let us know @BritandCo!