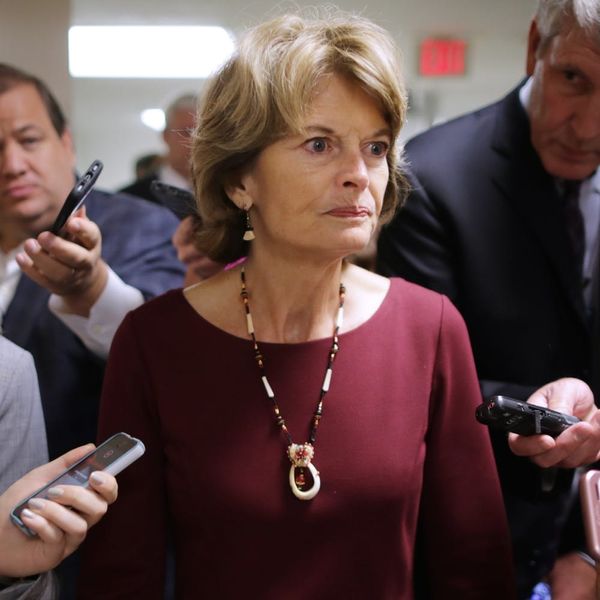 The dramatic and sometimes shocking months-long saga that has been judge Brett Kavanaugh‘s Supreme Court Justice confirmation process will come to a close when the Senate holds a final vote on his nomination as early as Saturday. Nearly every senator in both the Democratic and Republican parties has been decided for some time now as to how they will vote, with a couple of major exceptions — perhaps most notably, moderate Alaska GOPer Lisa Murkowski, who has insisted she will not vote to confirm an anti-choice candidate.

In a cloture vote to advance Kavanaugh’s nomination to a final vote, senators cast votes Friday with only two of them breaking ranks: Murkowski, who voted against advancing the nomination, and West Virginia Democrat Joe Manchin, who did the opposite. Murkowski’s fellow pro-choice Republican Susan Collins of Maine announced Friday in a lengthy press conference that she will vote to confirm Kavanaugh, all but securing the judge’s fate as a justice. And yet, despite an outcome that has become virtually certain, American progressive s— and especially women — are looking to Murkowski as a beacon of strength in a moment of unprecedented bipartisan tension.

Murkowski said Friday that she is still undecided on her final vote, adding, “I believe [Kavanagh’s] a good man. It just may be that in my view, he’s not the right man for the court at this time.” Still, liberals are hopeful that Murkowski will vote against Kavanaugh in the end, and heaped praise for her decision to break with her party on Friday morning.

Former Planned Parenthood CEO Cecile Richards called Murkowski “brave and independent” in a tweet on Friday, praising the senator for “putting people ahead of politics.”

This woman is putting people ahead of politics: brave and independent. Thank you @lisamurkowski https://t.co/826Iu8WZZW

Others compared what they see as bravery on Murkowski’s part with Collins’ decision to approve Kavanaugh. Former Democratic California Senator Barbara Boxer tweeted, “Susan Collins is no Lisa Murkowski, and that’s too bad.”

.@SusanCollins cites facts selectively. That is not what a deliberative body should do. She stands with a party that demeans women. She supports a nominee who Is angry and partisan. Susan Collins is no @lisamurkowski and that’s too bad.

The progressive website MoveOn.org tweeted a thanks to Murkowski for listening to survivors (even though she called Kavanaugh a “good man”), and called on people to continue to pressure her to vote no.

Murkowski’s undecided stance has given hope to those who are horrified by the idea of Kavanaugh sitting on the Court, not only for the explosive sexual assault allegations him, but also for his years of conservative decisions as a federal judge. Still, a “no” vote from Murkowski alone is not enough to tip the scales against Kavanaugh.

But despite the fact that her vote will apparently do nothing to stave off the impending nomination, liberal and progressive voters, as well as women from both sides of the aisle, seem to be taking solace in the fact that there’s at least one Republican willing to side with them on this decision. Indeed, if she votes no in the end she’ll have done more to help than Manchin, a Democrat, and certainly all of her Republican colleagues.