Are Aluminum-Based Antiperspirants Actually Bad for You? 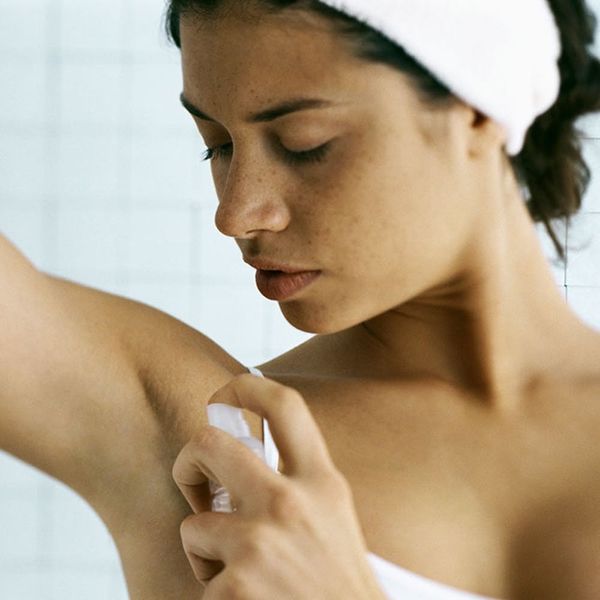 As a carrier of the breast cancer-causing genetic mutation known as BRCA2, there was a time when the idea of a connection between aluminum antiperspirants and breast cancer caused me major panic. For a stretch of several months, I experimented with every alternative sweat prevention strategy I could get my hands — or pits — on. I tried an apricot-scented organic brand, a rather wet “natural” spray from a local health food store, and something involving crystals (though crystals of what I’m not quite sure). But in the end, none of these options actually worked for me. Inevitably, I would sweat through my cotton shirts or find myself smelling like overripe fruit by afternoon. I missed the effectiveness of my good old-fashioned grocery store brand stick.

It dawned on me that I’d been basing my deodorant decisions on vague, social media-driven hearsay. Now I wanted more solid answers. Could aluminum antiperspirant really be so bad? I’d heard rumors that it’s associated with other health issues besides cancer, like Alzheimer’s and kidney disease. But does evidence actually back up these associations?

The theory behind the aluminum deodorant and breast cancer connection goes that when a razor inadvertently nicks the skin under the arms, this break could allow aluminum to be absorbed into the lymph nodes. Then, because using antiperspirant keeps this area from sweating (and pushing the aluminum back out), it could linger in large amounts, leading to cancerous mutations. The fact that most breast cancers occur in the upper breast closest to the lymph nodes of the armpit has fostered concern that the two go hand in hand.

The research most often referenced around this concept is a single study from 2003. It found that women diagnosed with breast cancer at younger ages had started shaving their underarms and using antiperspirant at early ages. But the American Cancer Society points out that this study did not include a control group (standard procedure in most research) and has been criticized as “not relevant to the safety of these underarm hygiene practices.” In fact, the ACS doesn’t give credence to fears of aluminum at all, concluding that “no clear link has been made” between it and breast cancer development. The National Cancer Institute agrees, stating rather definitively about aluminum antiperspirants that “no scientific evidence links the use of these products to the development of breast cancer.” If these two trusted institutions aren’t concerned about the risks of aluminum for breast cancer, I’ve decided I don’t need to be, either.

Okay, so if we’re in the clear for the Big C, could aluminum in our pits cause problems in our brains? Back in the ‘60s, researchers found that people with Alzheimer’s had higher concentrations of aluminum in their brains, leading to concerns that antiperspirants could contribute to this issue. It’s true that aluminum in high doses can cause neurological symptoms like confusion and memory loss. But the tide of medical opinion has changed since the mid-20th century, and now experts have essentially ruled out aluminum as a cause of Alzheimer’s. In fact, the Alzheimer’s Association states that “studies have failed to confirm any role for aluminum in causing Alzheimer’s.” If you’re like me, your main issue with antiperspirant and memory will probably just be remembering to put it on every day.

Kidney disease is another health issue critics sometimes point to as a reason to steer clear of aluminum. Since the kidneys comprise a major part of the body’s waste removal system, when they don’t function properly, they can have a hard time getting rid of a potentially toxic build-up of any chemical, aluminum included. Therefore, public health authorities do advise people with existing kidney disease to be careful about their choice of deodorant. (Even then, however, these warnings are only intended for people whose kidney function is at 30 percent or less.)

For the average healthy person, it appears that there’s no cause-and-effect mechanism between aluminum in antiperspirants and kidney disease. The National Kidney Foundation dismisses the idea of these ingredients as problematic, stating that “it’s almost impossible to absorb enough aluminum through the skin to harm the kidneys.” After all, the glands under your arms are designed to keep harmful stuff out, not let it in.

Down to the Nitty Pitty

The choice of which type of product to roll, spray, or spread under your arms each day is entirely up to you. In the end, the research shows that you’re free to use antiperspirant based on your own preferences and how well it works for you, not out of fears around aluminum’s ill effects on your health. There’s no right or wrong in the battle against B.O.

Have you had concerns about aluminum-based antiperspirant? Tweet us at @BritandCo.

Sarah Garone
Sarah Garone is a mom, wife, nutritionist, and freelance writer in Mesa, AZ. She loves music and travel, speaks fluent German, and does a lot of running (to counterbalance the surprising amount of cookies she eats for being a nutritionist). Find her sharing great recipes and helpful nutrition info at A Love Letter to Food.
Healthy Living
Health
Healthy Living Womens Health