Bachelorette Rachel Lindsay and Her Fiancé Made Their Post-Finale Debut on Jimmy Kimmel Live! 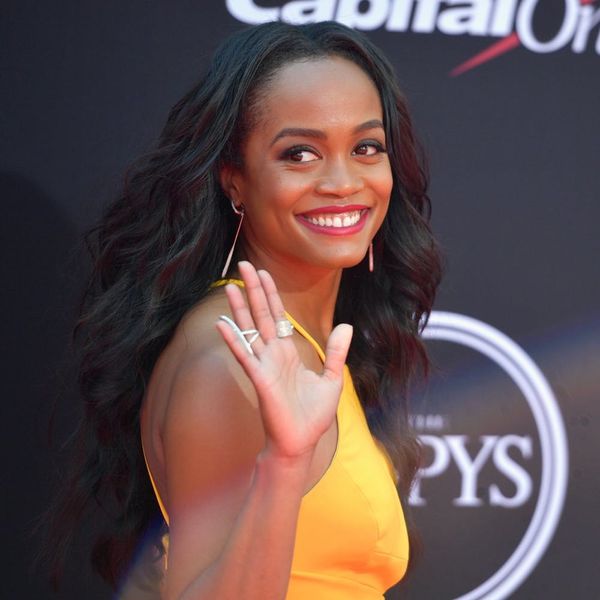 Jimmy Kimmel is definitely a member of Bachelor Nation. In his opening monologue Monday night, the late-night host revealed that he’s been able to correctly predict four of the last five Bachelors and four of the last five Bachelorettes. His pick for Rachel Lindsay this season was Peter Kraus, but as we all found out last night, she chose to get engaged to Bryan Abasolo instead. Kimmel was a little bummed he was wrong, but he welcomed Abasolo and Lindsay onto his show after the finale and had them play a little game while they were there.

.@TheRachLindsay and her fiancé’s leg! See the rest of him on #Kimmel tonight after #TheBacheloretteFinale! pic.twitter.com/ZJRTC3o02p

Teasing her appearance beforehand, Kimmel tweeted a pic of of Lindsay and her gorgeous Neil Lane engagement ring rubbing her not-yet-known fiancé’s leg. Before Lindsay and Abasolo appeared on the show, Kimmel spent the majority of his monologue talking about why he thinks Kraus is the most sane person who has ever appeared on the show.

“They call me Rose-tradamus,” Kimmel joked about his previous ability to pick Bachelor winners. “My pick, Peter, did something no one has ever done before. … Peter said, ‘Rachel, I do want to be with you, but I just can’t propose yet because I take a marriage proposal too seriously,'” Kimmel explained of his pick. “But Rachel said, ‘Sorry, but I’m looking for a proposal now on TV,’ so that was that, relationship over.”

After joking about the top two men vying for Lindsay’s heart, Kimmel had Lindsay and Abasolo on to play “Let’s Make a Deal.”

Calling their appearance the “After the After the Rose Spectacular,” Kimmel asked Lindsay, “Rachel, tonight after an amazing journey, you chose Bryan. And now, you have one more decision to make. Would you like to keep Bryan, and marry him as planned, or would you like to trade him for whatever is behind door number two?”

“I think I’ll stick with Bryan,” Lindsay replied before Kimmel opened the door to reveal his sidekick Guillermo holding a bouquet of roses. “Yeah, you f**cked up,” Guillermo quipped after throwing his bouquet to the ground.

While the couple aren’t planning their wedding yet, Abasolo told host Chris Harrison during the After The Rose special that he’s fine with whatever fiancée Lindsay wants. “She wants to do a winter wedding, and whatever she wants, she gets,” he admitted. Lindsay added, “We’re not rushing anything. We just want to build our lives together in a normal sense.” While the couple currently don’t live together, they plan on moving to one of three cities but have yet to make their final decision.

Have you ever moved across the country for a relationship? Tell us @BritandCo!

Kat Armstrong
Kat has been a writer, social media maven and mom for longer than she's willing to admit. She's also spent time in front of and behind the camera, interviewing celebs, politicians and acting as a producer for fashion and artistic photography shoots. When she isn't writing for various orgs and publications, she's hanging with her kids, husband and French Bulldog, Peter, in Toronto, Canada.
The Bachelorette
TV
The Bachelorette