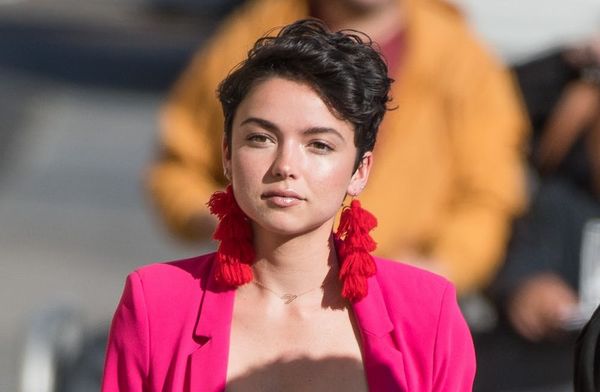 The “M” in Bekah M. now stands for “mom”! Bachelor season 22 star Bekah Martinez and her boyfriend, Grayston Leonard, are proud first-time parents after welcoming a baby girl into the world this past weekend.

According to People, the couple welcomed their daughter on Saturday, February 2, at 10:14am via a water birth at the Natural Birth Center in Los Angeles. The little bundle weighed in at 7 pounds, 10 ounces. So far, the new parents have not revealed the baby’s name.

Martinez took to Instagram on Tuesday, February 5, to share a couple of photos from the birth. “On the morning of February 2nd, our little girl joined us earth-side and we will never be the same,” she captioned the pics. “We are all as healthy and happy as can be.”

Proud dad Leonard also shared two snaps of their little girl with the world. “No pictures please,” he captioned the images, which show the newborn holding her hands in front of her face as she nestles in with her mom and in a cozy bundle of blankets.

The Bachelor alum first revealed that she and Leonard were expecting back in September. The pregnancy was a surprise to the couple, who had only been dating for three months at the time. Martinez remained candid about the unplanned nature of the pregnancy, hoping to provide perspective and support to people who might find themselves in a similar situation.

“We wanted to capture how scary it was to be in that position,” she said in a YouTube video at the time. “Our method of birth control failed. There is a mentality of, ‘It’s not going to happen to me, what are the odds that it’ll only take once?’ Well, spoiler, it only took once. … It’s really ignorant and unfair to assume that someone is taking absolutely no precautions if they become pregnant.”

Do you have any name ideas for the newest little Bachelor baby? Let us know @BritandCo!