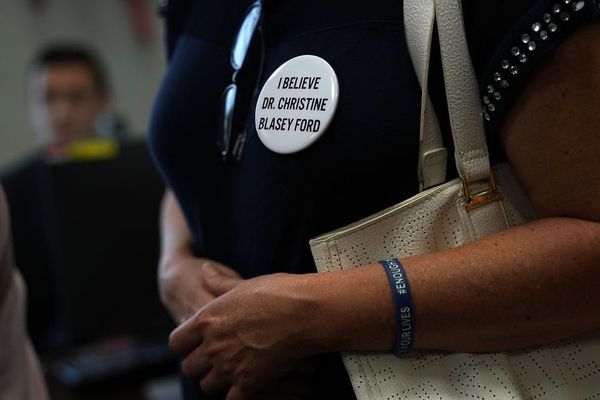 As Professor Christine Blasey Ford prepares to testify against Judge Brett Kavanaugh in the coming days, her supporters are organizing a national walkout to show solidarity. The walkout will take place on Monday, September 24, at 1pm ET, just a few days ahead of Blasey Ford’s planned appearance before a Senate panel to discuss her allegation of sexual assault against Judge Kavanaugh, President Trump’s Supreme Court nominee.

News of the walkout gained traction on social media on Friday and over the weekend, after #MeToo founder Tarana Burke tweeted the details. Organizations such as Planned Parenthood, NARAL Pro-Choice America, the National Center for Transgender Equality, the Human Rights Campaign, and the Time’s Up movement have pledged their support and are encouraging other participants to wear black and post photos and messages with the hashtag #BelieveSurvivors.

Survivors must be heard. Wear black and join the national walkout on Monday, Sept. 24 at 1 pm ET/10 am PT in solidarity with Dr. Christine Blasey Ford. https://t.co/XcLucrziMJ #BelieveSurvivors #TIMESUP pic.twitter.com/s3RQY40Mf5

Several celebrities have spoken out in solidarity with Dr. Blasey Ford, too. Amber Tamblyn, Tracee Ellis Ross, Brie Larson, Alyssa Milano, Samantha Bee, Debra Messing, Piper Perabo, and Ellen Page have all promoted the protest on social media, and others voiced their support for the professor in a video last week.

The #BelieveSurvivors messaging appears to be a response to questions about Blasey Ford’s credibility. Since she came forward earlier this month, Kavanaugh’s defenders (including President Trump) have attempted to discredit her by suggesting that if the incident occurred as she says it did — or, in Trump’s words, if “it was as bad as she says” — she would have or should have reported it sooner. (The allegations, which Kavanaugh denies, concern misconduct alleged to have occurred when they were both teenagers.)

Survivors and allies shut down that line of questioning with another hashtag, #WhyIDidntReport, which highlights some of the many well-documented reasons — such as fear, anger, and shame — that keep victims from coming forward.