See Every Best-Dressed Celeb Guest at the Royal Wedding 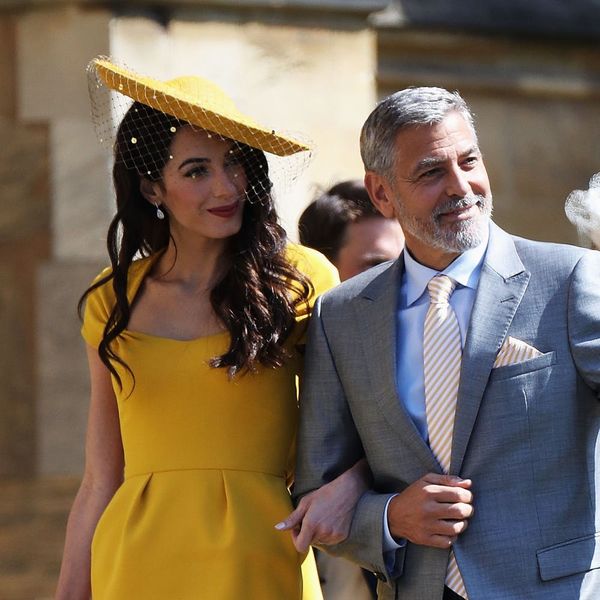 Here comes the bride! But first, the celebrity wedding guests. Scroll through to see what the stars, including Amal Clooney, Victoria Beckham, and Priyanka Chopra, wore to the royal wedding of Prince Harry and Meghan Markle on May 19 at St. George's Chapel in Windsor.
Princess Eugenie of York: The young royal kept it short and sweet in a baby blue tweed Gainsboug minidress. (Photo via Gareth Fuller/Getty)
Patrick J. Adams and Troian Bellisario: The bride’s onscreen hubby and his real-life wife, Pretty Little Liars star Bellisario, were stylish as ever, with the latter in a blush pink long-sleeve Temperley London midi dress and matching topper. She finished the look off with jewels from Anna Sheffield and Jacquie Aiche. (Photo via Ian West/AFP/Getty)
Gina Torres: Torres brightened up Windsor Castle in a punchy red printed frock. (Photo via Ian West/Getty)
Priyanka Chopra: Markle’s BFF suited up in a pale blue custom Vivienne Westwood suit. (Photo via Chris Jackson/Getty Images)
Serena Williams and Alexis Ohanian: The tennis star looked fierce as could be in a blush pink Versace gown with an asymmetrical neckline and Bulgari and Audemars Piget jewels. (Photo via ODD Andersen/AFP/Getty)
Carey Mulligan and Marcus Mumford: The Collateral actress and her husband were light and springy, with the actress in a white floral maxi dress.(Photo via Ian West/Getty)
Amal and George Clooney: Amal stood out from the crowd in a sunny fitted Stella McCartney frock with a matching veiled fascinator. (Photo via Ian West/ WPA Pool/Getty)
Victoria and David Beckham: The Beckhams were quite the fashionable pair, with Posh in a navy dress of her own design and Beckham in a traditional gray suit. (Photo via Ian West/Getty)
Sabrina Dhowre and Idris Elba: The Thor: Ragnorak actor and his new fiancée looked crisp in coordinating navy hues, with Dhowre in a Gucci dress coat and a Vivien Sheriff fasicnator. (Photo via Ian West/WPA Pool/Getty)
Oprah Winfrey: The media mogul was radiant in a tiered baby pink Stella McCartney dress with scalloped lace edging and a straw hat. (Photo via Andrew Milligan/PA Images/Getty)
Pippa Middleton and James Matthews: Middleton’s pregnant younger sis opted for a seafoam green dress by The Fold and a fascinator of small pink roses. (Photo via Chris Jackson/Getty)
Lady Kitty Spencer: Princess Diana’s niece, who recently walked the runway for Dolce & Gabbana, turned heads in an emerald dress with a bright embroidered floral print and a matching Philip Treacy fascinator with contrasting orange pumps and clutch. (Photo via Ian West/Getty)
Chelsy Davy: Prince Harry’s most-famous ex-girlfriend kept it simple and chic in a navy blue Alaia dress with a capelet top. (Photo via Chris Jackson/Getty)

Which guests’ look was your fave? Sound off over @BritandCo.

Which guests’ look was your fave? Sound off over @BritandCo.

Nicole Briese
Nicole is the weekend editor for Brit + Co who loves bringing you all the latest buzz. When she's not busy typing away into the wee hours, you can usually find her canoodling with her fur babies, rooting around in a bookstore, or rocking out at a concert of some sort (Guns N' Roses forever!). Check out all her latest musings and past work at nicolebjean.com.
Celebrity Wedding
Wedding Style
Celebrity Wedding Royal Family Royal Wedding Wedding Roundup Wedding Style Weddings
More From Wedding Style