Heads Up: Scary Changes Could Be in Store for Your Student Loans 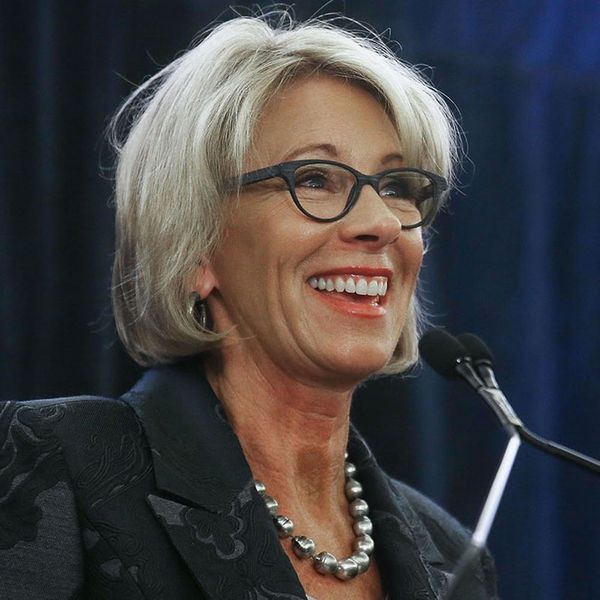 Collectively, Americans currently owe over $1.4 trillion in student loan debt. That record-breaking amount of money isn’t serviced directly by the Federal Student Aid Office. Instead, it’s managed by third-party companies (like your nemesis Sallie Mae), which are contracted by the government. But here’s the thing: As loan totals become more threatening, so does the collection approach of those third-party companies. So last year President Obama put his presidential foot down by issuing a memorandum to help collectors work with the students to efficiently pay back what they owe rather than intimidate and bury them with their debt. But those regulations have now become yet another relic of the past administration.

LET’S TALK ABOUT THOSE OBAMA REGULATIONS

Student loans are complicated and loan companies have a reputation for being sneaky. That combination is problematic for obvious reasons. Just before his final term came to an end, Obama established five key guidelines which aimed to streamline the loan process and finally put the student’s needs first. The memos laid out plans to create a single website for borrowers to use for paying their loans and gathering any information they might need. Additionally, Obama’s guidelines held the loan companies to a higher level of customer service and even imposed penalties on companies who don’t aptly provide students the service and tools they need to pay back loans efficiently and affordably.

WHY WERE THE REGULATIONS NECESSARY?

In response to this question, let’s talk about the lawsuit against Navient (formerly Sallie Mae). Shortly after the Obama memos were sent, the Consumer Financial Protection Bureau along with two state attorney generals sued Navient for an extensive list of violations conducted with what the CFPB alleges is an intent to cheat borrowers.

In a New York Times piece that details some of the specific allegations, the actions of the company are disquieting, to say the least. Navient allegedly steered borrowers away from income-based repayment plans (the most affordable way pay down loans when you’re not making much) by making the option difficult to find. Instead, it pushed borrowers to file for forbearance, which allows borrowers to pause payments until they start making more. This might seem like a rational option, but when you go into forbearance you’re still racking up interest. By using this process, Navient collected more than $4 billion in interest.

.@usedgov Yet another gut punch to struggling student loan borrowers. And another reason we need the @CFPB to protect students when @usedgov fails.

Additionally, the NYT reports multiple incidents in which Navient mishandled lump-sum payments sent in by borrowers. Borrowers who instructed Navient to use the money to pay off a specific loan were surprised to find that the payment had instead been divided among multiple loans they had with the company, which would still allow Navient to collect interest.

The lawsuit is still underway, and while initially Navient denied all allegations against them, they have since followed up with a statement that says, “The servicer [Navient] acts in the lender’s interest (here that lender is often the federal government itself), and there is no expectation that the servicer […] act in the interest of the consumer.”

what’s the point in ROLLING THESE RULES BACK?

Ah, the million dollar question — or should we say 1.4 trillion dollar question. Unfortunately, DeVos and her Department haven’t really given a detailed explanation of why they feel this is necessary. In a memo announcing the withdrawal of Obama’s policy, DeVos said the policy lacked “consistent objectives” and said the regulations were inconsistent and full of shortcomings.

Additionally, she said it was rolled back in an attempt to limit “the cost to taxpayers” and “increase customer service and accountability.” If the Department kept with Obama’s rules, the government would have had to hire loan contractors and counselors to help students more aptly navigate and understand their options. How this would increase customer service has not been explained.

During Betsy DeVos’ confirmation hearing for the Secretary of Education role, her stance on — and lack of experience with — managing student loans took the main stage. In a now-viral clip, Senator Elizabeth Warren asked DeVos if she has ever overseen a trillion-dollar loan program, or if she’s ever had experience taking out or paying off a student loan for either herself or her children. Her response to those questions: no.

DeVos has a long history of pushing toward the privatization of public funds. Her preference for using tax vouchers for charter schools has caused a significant amount of debate among both her supporters and critics. There are similarities between her ideals there and this particular change. Rolling back these regulations gives more control to those third-party lenders contracted by the government and less to the government itself. It also supports a widely held criticism that DeVos values the benefits of corporations over people — something that’s incredibly problematic when you’re dealing with public education.

oKay, BUT WHAT DOES THIS ALL MEAN FOR YOU and your loans?

When DeVos rescinded Obama’s standards, she didn’t replace them with a new set. Until that happens, she’s essentially given lenders the power to keep doing what they’re doing. Whether she meant to or not, she’s also given them the freedom to make the repayment process more confusing or to nudge students toward a program, loan, or repayment plan that will benefit the company rather than the student.

Matt Ribe, the Senior Director of Legislative Affairs at the NFCC, doesn’t deny that this is true, but he says his main concern with the recent changes is that it eliminates students’ access to receiving impartial, educated guidance on what repayment option is best for them. Under Obama’s guidelines, student loan counselors would have been a readily available resource for students to turn to. Ribe says, “The servicers are not counselors and they’re not expected to be counselors. In other loan industries, such as mortgages and credit cards, they’re equipped to deal with 90 to 95 percent of borrowers who just need to submit their payment and don’t need a higher intensity service. But what the lenders in those other industries do is make use of third-party, non-profit counselors who do have the time, skills, and independence to be able to work with borrowers and help them identify a solution that makes sense for them.”

So now that’s a step you’ll need to seek out on your own. He goes on to say, “The advice I would give anyone — whether they’re a recent graduate or someone who’s been out for awhile — is to take a more thoughtful approach to their student loan repayment strategy and to engage with an expert counselor. Speak with an independently certified, non-profit counselor.” Ribe advises anyone with a student loan to head to Student Loan Help.

When it comes down to it, the major issue with these changes is that they imply the government sees no difference between business loans and student loans. But 70 percent of students who attend college need to take out loans in order to pursue higher education. The two are not the same. While loans may be necessary for most students, these should be treated as a national investment into the workforce of the future, not as a prime opportunity for profit. There should be a determined and bipartisan consensus that student loans are ultimately meant to benefit the student, not the business. Unfortunately, we’re just not there yet.

Have you had a shady experience with your student loan lender? Share with us on Twitter @BritandCo.