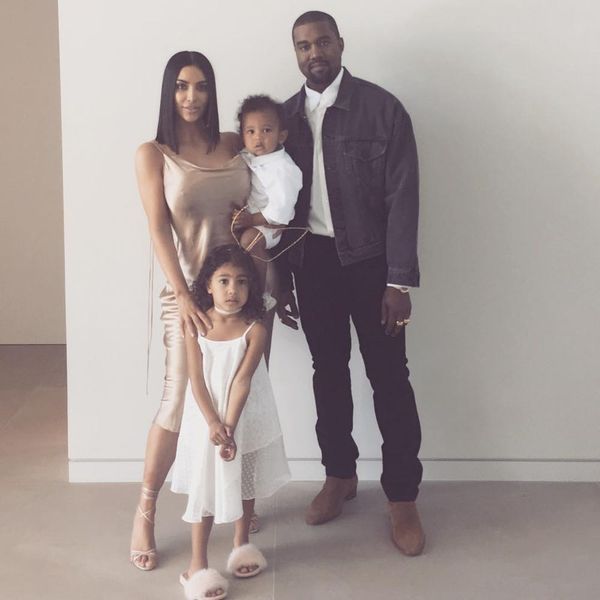 While a lot of celebs made the trek to the desert this weekend for Coachella, there were a couple of A-listers missing at the festival. Beyoncé (who was supposed to headline the event, but dropped out), Kim Kardashian, and Chrissy Teigen opted to spend Easter Sunday with their families, showing off their impeccable style along the way.

In a series of photos Tina Knowles shared on Instagram, we were able to get a glimpse of Beyoncé. The singer, who dropped out of headlining Coachella after announcing her pregnancy, looked angelic in an off-the-shoulder white Mina Roe Yasmin Dress ($139) with billowing statement sleeves. She finished her Sunday look with a pair of round mirrored Linda Farrow Sunglasses ($1,105) (very music festival ready), braids, and Prada Metallic Leather Platform Sandals ($780).

Kim Kardashian’s Easter was a family affair too. She shared a snap to Instagram, posing with her husband Kanye West in a Bec & Bridge nude slip dress and tie-up sandals. North West wore a white dress with a matching choker and furry slides. A pair of bunny ears completed the look. Little Saint wore a white button-down and shorts, while the Yeezus rapper wore a white button-down under a denim jacket with black pants and camel Chelsea boots.

The ladies each slayed their outfits, and it has us asking, Coachella who?

What do you think of everyone’s holiday looks? Tell us @BritandCo!

Channing Hargrove
Channing Hargrove is a freelance fashion editor and writer in New York City. When she isn’t writing about clothing (or shopping, for research, of course), Channing is writing about life in a tiny studio apartment in a big city — and what she’s wearing — on her blog, Channing in the City.
Beyonce
Celeb Style
Beyonce Celebrity Style Easter
More From Celeb Style