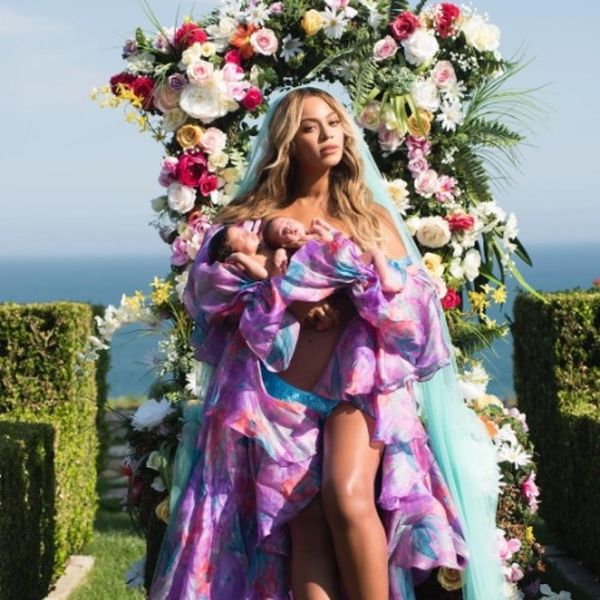 Beyoncé just introduced the world to her baby twins, Rumi and Sir Carter, and (as expected) they’re perfect! The big reveal is perfect too, and we just want to appreciate every speck of the totally worthy setup. Fans are surely overwhelmed by how simply stunning the entire sitch is, but it’s even more special when you compare it to her big pregnancy reveal photo from February.

Beyoncé and her team obviously went to great lengths when it came to her now super-famous baby bump pic, and the same care was used in this twin-intro image. There’s a chance that both photo shoots were designed at the same time, since there are key similarities and ties between the two.

Between @Beyonce pregnancy announcement & her twin photo shoot there is an American florist who never has to work again. #beyoncetwins pic.twitter.com/cxu8uaecQ0

Bey admirers have surely taken note of the fact that the pair of images have a very similar vibe. Both setups see Beyoncé posing against a flowery backdrop with a blue sky in the distance. While in the pregnancy announcement she holds her belly, in the twins’ debut she cradles little Rumi and Sir Carter. And though she’s wearing a luscious mauve dress in the pic with the twins, she’s also wearing a veil and baby blue underwear, just like in the first image.

We can’t wait for even more (arty, layered, and oh-so-adorable) photo shoots with this picture-perfect fam.

What do you think about Beyoncé’s pic with her new baby twins? Let us know @BritandCo!