Morning Buzz! Beyoncé Shared the First Photo of Twins Sir and Rumi and It’s EVERYTHING + More 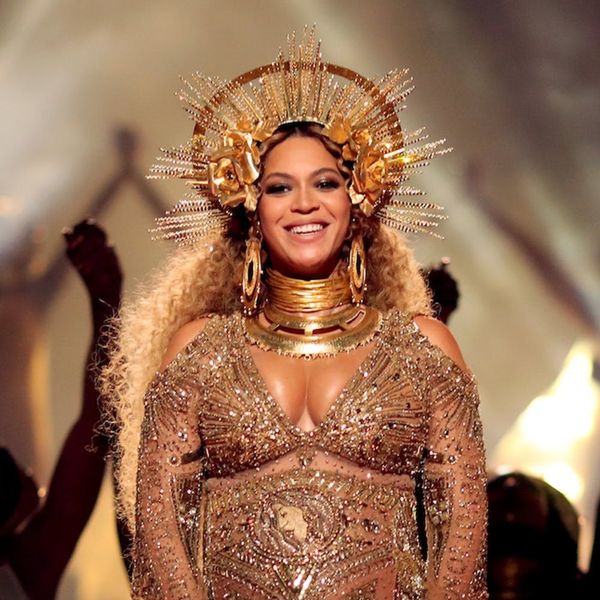 Beyoncé and JAY-Z’s twins make their debut in this morning’s top news stories. Check that and more out below in the Friday Morning Buzz!

1.Early Friday morning, Beyoncé posted the very first photo of Sir and Rumi Carter, which, in true Bey fashion, was no ordinary snap. With a serene coastal backdrop and a colorful ensemble of a breathtaking blue and mauve dress and veil, the shot is reminiscent of her epic pregnancy announcement. “Sir Carter and Rumi 1 month today,” the caption read, followed by a string of emojis which included the prayer hands, a heart, a man, a woman, a girl, and two babies. By our count, that would make the twins’ birthday June 14, several days before the internet got wind of the birth. Just look at those teeny little faces!

2.Spider-Man: Homecoming costars Zendaya and Tom Holland addressed dating rumors in a hilarious way. With reports (via unnamed sources) swirling that Zendaya and Holland sparked a love affair while filming for their new flick, Spider-Man: Homecoming, the duo has chimed in to offer up their two cents. While they didn’t actually confirm or deny the rumors, their reaction WAS rather amusing. “Wait wait…” Zendaya tweeted, along with a link to the rumors. “My favorite is when it says we go on vacations together. HA! I haven’t been on a vacation in years!,” she wrote, complete with crying-laughing emojis. Holland’s reply was equally perfect, with the star joking, “Does the press tour count?” (h/t Cosmo; photo via Robert Marquardt/Getty)

3. Barb from Stranger Things got an Emmy nomination and the internet has FEELINGS. Now that the 2017 Emmy nominations are out, Stranger Things‘ Barb is finally getting her vindication for (spoiler alert!) being killed off and forgotten on the show. The Netflix series was one of the most-nominated shows with 18 (!) nominations, one of which was an Outstanding Guest Actress in a Drama Series nod for Barb, AKA Shannon Purser. While some people seemed confused that Purser was recognized when Winona Ryder was not, the cult of Barb celebrated the victory, claiming “justice.” The Emmys will take place on September 17, and Stranger Things season two drops on Netflix on October 27. (h/t Mashable)

Once again the press is wrong. https://t.co/0v8RV5qqni

4. Kid Rock hints that he may actually be running for US Senate. Earlier this week, musician Kid Rock launched the kidrockforsenate.com website, and people seemed confused as to whether it was a publicity stunt for upcoming music, a ploy to sell merchandise or, well, the real deal. Kid — whose real name is Robert James Ritchie — penned a blog post to say that he still had time to file paperwork with the Federal Elections Committee to make it official, and that he would be simultaneously releasing new tunes. “Like politicians write books during their campaigns, I’m planning on putting out music during mine,” he wrote (he released two new songs and announced a tour at midnight). “It’s not a hoax, it’s a strategy, and marketing 101!” With more celebrities’ names, like The Rock, being thrown in the political ring, nothing about this would surprise us. (h/t People)

5.Bridezillasis the latest TV show to get a revival and we can’t WAIT. TV reboots are all the rage — from Gilmore Girls to Fuller House and, most recently, Will and Grace, what’s old is definitely new again. It’s not often that a reality series is brought back from the dead (though we’re still holding out for a Jersey Shore reunion show), but WE tv has some seriously exciting news for fans in 2018: the return of Bridezillas! “Years after saying goodbye to our last Bridezilla, we have been asked consistently to bring this show back by viewers and fans,” We tv president Marc Juris said in a statement. E! reports that casting is currently underway for 10 new hour-long episodes of total wedding meltdown territory, and TBH, it can’t come fast enough. (h/t E!)

6. Quote of the day: “Creativity is intelligence having fun.” Albert Einstein knew what he was talking about.

Do you have any creative projects planned this weekend? Let us know @BritandCo!