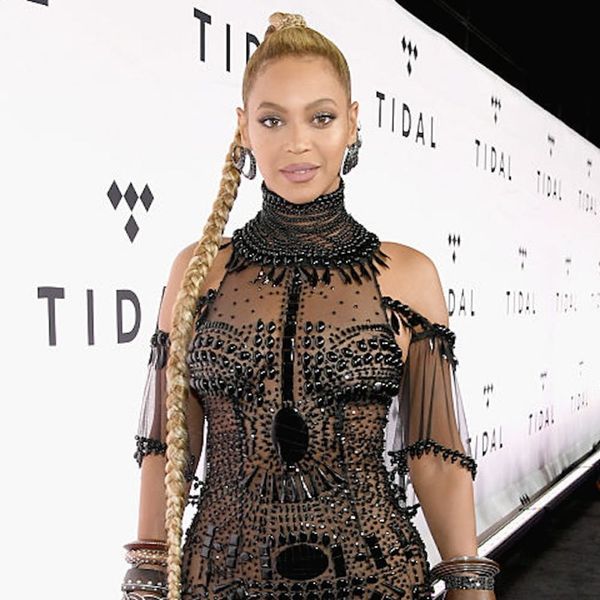 Oh, Beyoncé! After the Queen Bey blessed the entertainment world with an EPIC pregnancy announcement (which was basically also a high fashion photo shoot) earlier this week, she’s giving her hive even more sweet treats, this time in the form of some cute AF limited edition Valentine’s Day merch á la Kylie Jenner.

Included in the drop, which appeared in her online store yesterday, are sports bra and panty sets ($50) covered with (what else?!) lemons and bomb emoji (and yes, we want a pair). Then, there are the hoodies with hearts that read “Nothing Real Can Be Threatened” ($60) (perhaps a nod to the speculation surrounding her own marriage? Bye, haters!) and, for all the single ladies, some pretty badass sweatpants ($60) that read “Boy Bye” on the derrière — we’ll take those too, thanks.

But the one piece that has folks talking and speculating about a hidden meaning is the All Night Candy Crop tee ($60) featuring three colorful candy hearts. And no, it’s not because of the NFSW lyrics emblazoned on them from Bey’s smash hit “All Night:” “Kiss Up. Rub Up. Feel Up.”

As Teen Vogue points out, Beyoncé (who may or not be performing at tonight’s Super Bowl) posted a Warshan Shire poem to her blog following her huge announcement, featuring the mega sweet line, “I have three hearts.” Well, that just so happens to be the same number of hearts the crop top features (aww!) and, what’s more, “one of them is the color Blue.” Ohh, that DEFINITELY sounds like something the Queen of hidden meanings would do!

Will you be picking up any of Bey’s new merch? Tweet us @BritandCo.