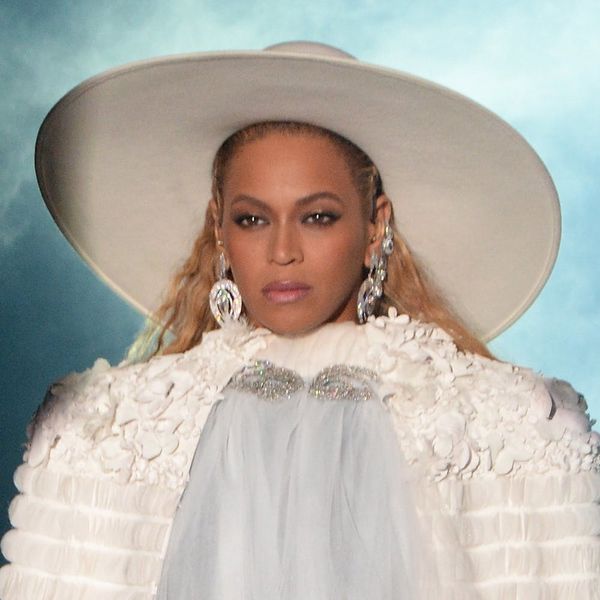 When you’re as wildly famous as Beyoncé, nothing is ever simple and straightforward, and that includes a pregnancy announcement. There’s plenty to consider before letting the world in on the big news, which is why some folks think that there may be a lot more to the pics than we first assumed (e.g. hidden messages and secret meanings). That’s also why plenty of fans think that Beyoncé’s pregnancy announcement may weirdly have something to do with the Grammys.

With the year’s biggest music awards just over a week away, there are those who are wondering why Bey didn’t just wait to make her big announcement then and there.

I feel like Beyoncé may not be performing at the grammys. It's in two weeks. Why she didn't announce the pregnancy there?

I kept thinking why she didn't wait to announce the pregnancy at the Grammys but then I remembered that Beyoncé never repeats herself honey!

A source revealed to Us Weekly that there’s a very good reason behind the decision. “She announced it this way before Grammy fittings and rehearsals, as she knew it would get out. She couldn’t repeat the same debut on the show like the [2011] VMAs and didn’t want it to take away from her Grammy wins and performance.”

The source added, “She wants Grammy night to be about celebrating the album and her work. Now she can get ready and perform on Grammy night without all the attention going to this.” That said, there will still no doubt be a heck of a lot of attention focused on Beyoncé at the awards, as everyone is eager to check out her look, her performance and that adorable baby belly.

And fans are HERE for it…

Beyoncé at the GRAMMYS this year is gonna be even more amazing. No orange curtain dress this time B. Flaunt that bump!!!!

Beyonce is pregnant
SNSD are coming back soon
Seohyun had a solo
BTS are coming in 11 days
Grammys
Coachella
Red velvet came back
2017 pic.twitter.com/mT5YX4fSaL

I want my mom @beyonce to slay my entire existence at the grammys before beyhydration starts. Also, aoty is on the waaaaaaaayyyyyyy

grammys 2017
host: and the grammy for best new artist goes to..
the chainsmokers:…
chance the rapper:…
host:…beyonce's unborn twins!!!

Beyonce, will SHUT IT DOWN at the #GRAMMYs this year. Heck she has to!

In 10 days I will see three-hearted-Beyoncé at the Grammys. 😱

This pics doesn't exist yet but it's already legendary

This is about to be Beyoncé at the Grammys pic.twitter.com/qi6arlFMmi

Beyoncé's going to have 100m followers on instagram by the Grammys

Are you excited to see a pregnant Beyoncé at the Grammys? Tweet us @BritandCo!

Desiree O
Desirée O is a ‘Professional Bohemian’ who loves anything and everything related to the arts, entertainment, and pop culture. She ADORES being a ‘Newsy’ for Brit + Co, covering all of the latest tidbits of awesomeness that you want to read about. When she’s not writing, she’s either making messy art, going on long adventurous walks with her camera, or poking around over at bohemianizm (http://www.bohemianizm.com/). You can find out about Desirée O and her work at http://DesireeO.com/ or follow her on Twitter @DesireeO.
Beyonce
Celebrity News
Beyonce Celebrity Baby Grammy Awards
More From Celebrity News