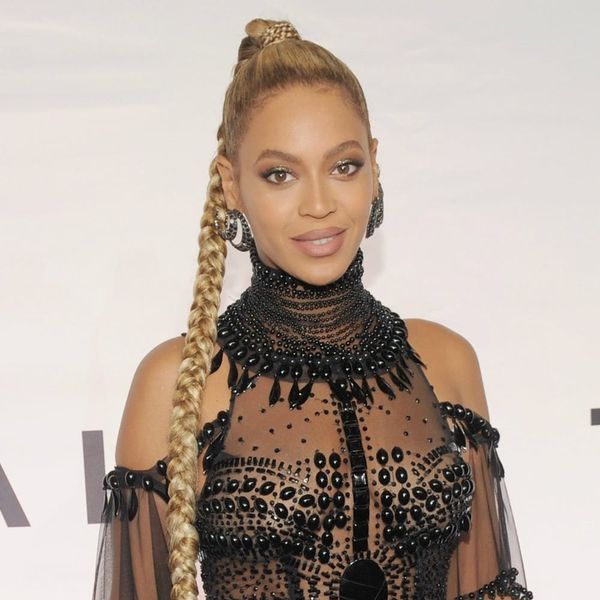 The election is only a few days away, and as we prep our nasty women-inspired voting stickers and make sure our election-style manis are up to par, we have to take a moment to soak in the greatness of Beyoncé’s latest appearance. No, we’re not talking about her surprise performance at the CMAs (though that was pretty awesome too), but her next-level support of Hillary Clinton at a recent campaign concert. Guys? She ROCKED A PANTSUIT.

It was in Cleveland that Hillary Clinton was joined on stage by Jay Z, Chance the Rapper and, of course, Queen Bey for the #GetOutTheVote concert . After the crowd managed to calm down (at least a little bit) from all the excitement, they were treated to a performance of Bey’s “Formation” and a powerful speech from Beyoncé that was all about female empowerment and the importance of voting, particularly as a female and as a millennial.

Donned in head-to-toe polka dots, Bey said, “I want my daughter to grow up seeing a woman leading the country,” after she and her backup dancers (who rocked seriously stylish blue pantsuits of their own and “I’m with her” T-shirts) wowed the crowd. “That’s why I’m with her… we have to think about the future of our daughters, our sons and vote for someone who cares about them as much as we do.”

But it didn’t end there. Bey also made it a point to take a moment and remind all the ladies listening just how HUGE the win would be for our gender. After all, it was less than 100 years ago that women weren’t even allowed to vote. Progress, indeed.

Backstage, Bey and hubby Jay Z shared a private moment with the presidential hopeful, and, if this photo is any indicator, they had an absolute blast. We mean, just look at that shirt! It’s the same one the dancers wore, and though there are plenty of official “I’m With Her” shirts in Hillary’s e-shop, this one seems to feature the wide-brimmed hat Beyoncé herself wore in her “Formation” video. Do we spy a custom Bey X Hill creation? Whatever it is, we need it now!

What do you think of Bey’s speech? Tweet us @BritandCo.