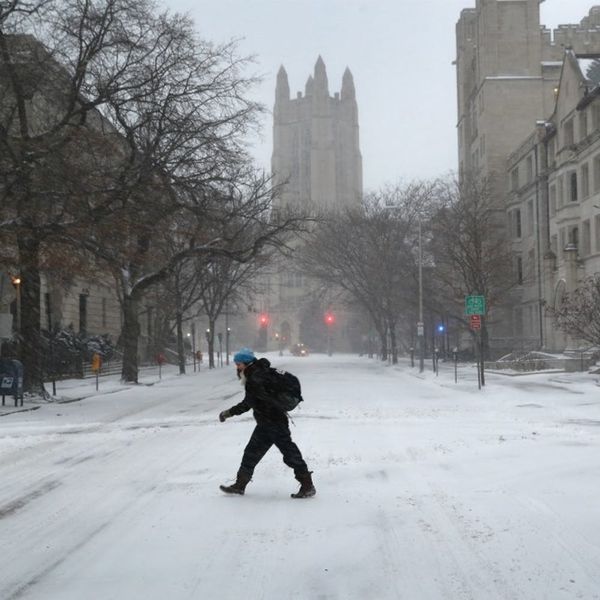 Although some of us may have scoffed earlier this week at the phrase “bomb cyclone,” the winter storm that meteorologists have been warning us about has walloped the eastern United States. Tragically, at least 16 people have been confirmed dead in the wake of the week’s frigid temps, and at least six of the 16 fell victim to Thursday’s storm conditions, according to ABC News.

Road closures are in place. pic.twitter.com/WWNaik2aJC

With forecasters expecting around a foot of snow or more up the Eastern Seaboard, and with below-freezing temperatures already rocking the entire northeast, people are being urged to stay indoors unless it’s absolutely necessary. In Boston, ahead of the snowstorm, the city saw massive flooding on its streets, which was followed by flash freezing.

CNN is reporting that 16 people have died during the week’s extreme cold, with six deaths reported in Wisconsin, four in Texas, three in North Carolina, and one each in Michigan, Missouri, and North Dakota. The news outlet also reports 40,000 customers in Virginia and North Carolina without power and around 10,000 more in Florida.

While the northeast is feeling the worst of the superstorm’s effects, the storm actually started in the south — an area of the country not used to freezing temperatures and snowfall. South Carolina got six inches of snow, and in parts of Florida, snow fell for the first time in nearly 30 years.

Although many believe that extreme cold is proof that global warming isn’t real, any extremes in temperature, hot or cold, can be a sign that the planet’s ecosystem is damaged. The current cold temperatures are expected to last through the weekend, with temperatures dipping below zero (including wind chill) in some regions.

Are you being affected by the bomb cyclone? Tell us how you’re staying warm @BritandCo!

Kat Armstrong
Kat has been a writer, social media maven and mom for longer than she's willing to admit. She's also spent time in front of and behind the camera, interviewing celebs, politicians and acting as a producer for fashion and artistic photography shoots. When she isn't writing for various orgs and publications, she's hanging with her kids, husband and French Bulldog, Peter, in Toronto, Canada.
science
Current Events
science