15 Buckwheat Pizzas That Are Vegetarian AND Gluten-Free 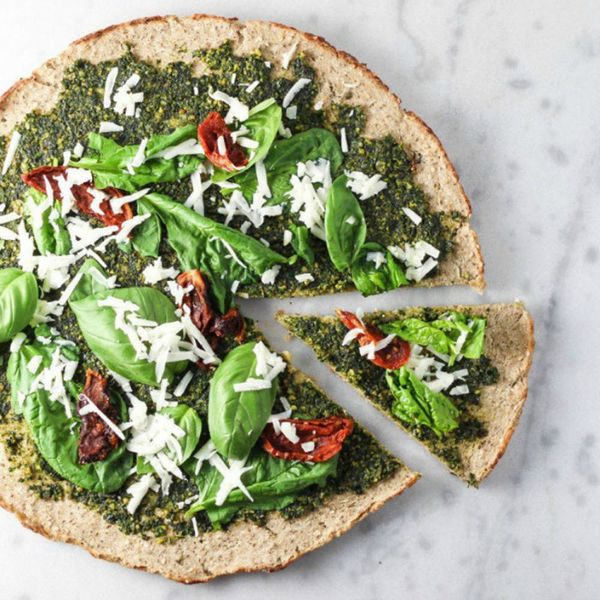 After you go meatless and gluten-free, one of the first things you miss are pasta and pizza, obvi. Luckily, there are lots of tasty pasta alternatives, including rice noodles and chickpea versions. But a good, crispy GF pizza crust is pretty hard to come by, unless you know a few hacks. One of the best tricks is to use buckwheat flour, which despite having the word “wheat” in the title has always been 100 percent gluten-free. Here are 15 buckwheat pizza recipes that say, “Girlfriend, you’re not missing a thing.”

This take on a tomato tart with tasty heirloom tomatoes will change the way you think of thin-crust pizza forever. (via Eat Myyy Thoughts)

The crust on this pizza is chock full of healthy ingredients like buckwheat, cauliflower, and chia seeds. But the homemade spinach pesto is the real star of the show. (via One Green Planet)

Avocado and basil hummus on pizza? Prepare to meet your new comfort food addiction. (via Mealz)

This pizza is topped with microgreens, dried tomatoes, olives, and mushrooms — but you can add any veggies you have on hand and it will taste just as good. (via Becomingness)

If you’ve been looking to get a bit more kale in your diet, you’ll find yourself revisiting this pesto again and again. (via Lea Lou)

Roasted Eggplant and Pepper Pizza on a Buckwheat Crust

This pizza is so spicy and good, it’s going to convert some new eggplant lovers. Leave off the optional feta for the vegans at the table. (via Golubka Kitchen)

Calling all avocado lovers! This pizza is a double-avocado-whammy — there’s avocado in the topping and in the crust too. (via Rebel Recipes)

If you’re a lacto-vegetarian who eats seafood, you’ll enjoy this pizza that’s like a Mediterranean salad served on a crispy flatbread. (via AO Life)

You’re getting two recipes in one here — a vegetarian version for the chef and a Hawaiian for the non-vegetarians at the table. Picky eaters for the win! (via The Whole Daily)

This recipe makes enough dough for four personal size pizzas and it keeps in the freezer. Make a double batch, and pull them out as needed on nights when you’ve had to work late. (via Whole Hearted Eats)

This crust is made with cooked buckwheat rather than buckwheat flour. (via Food by Maria)

This crust has lots of ground nuts and seeds in it, making for one of the firmest GF pizza around. (via Nyoutritious)

This one’s for all the thick crust lovers out there. The flaxseed in this crust give it the chew texture you crave — and it passes the “fold and eat” test. (via Goodness to Glow)

Kiss *gluten envy* goodbye. This homemade crust and sauce is so authentic tasting, it will put your pizza Fridays back on the menu. (Global Foodery)

Pears and gorgonzola cheese are a tasty food combo that always works, even on pizza. It’s a classic pairing — or should we say “pearing”? (via Food by Mars)
Sally Jones
Sally Jones is a writer and editor living in New York City. She has worked at many websites including iVillage, Ladies Home Journal, More, Parenting, Cosmopolitan, The Knot and YourTango, in jobs ranging from editor to COO. Renovation and interior design are her unhealthy obsessions hobbies. She has renovated every home she's lived in, including the rentals, and like... whoa, who does that? You can catch her at her blog Renov8or.
Dinner Recipes
Healthy Eating
Dinner Recipes Gluten-Free recipe roundup Vegetarian Recipes
The Conversation
More From Healthy Eating