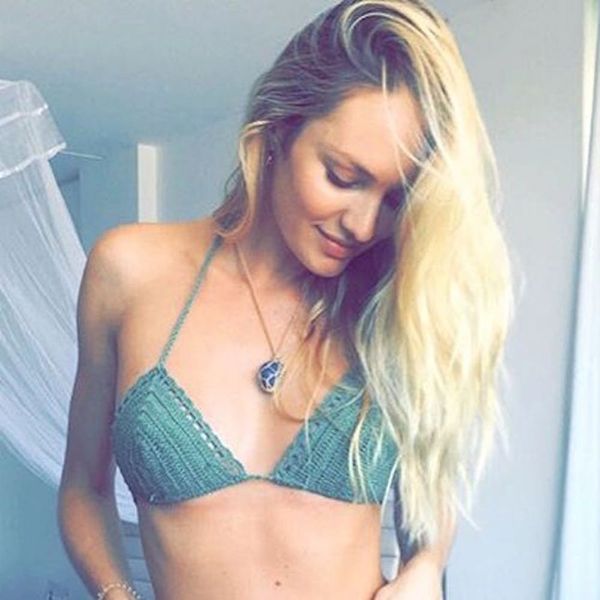 1. Move over Audrina, there might be a new queen of maternity style in town! We’ve loved following Audrina Patridge’s dreamy baby bump pics throughout her pregnancy, but the newest pic from Victoria’s Secret model Candice Swanepoel has us happy to have a replacement once Audrina gives birth! The bikini-clad beauty is literally posing in front of a super whimsical bed canopy! How adorable can you get? “Getting the Tum in the the sun,” the caption reads. Oh. I guess that much more adorable. (via @angelcandices)

2. Amy Schumer’s boyfriend’s mom is about as adorable as they are. In a new interview with Jimmy Fallon, Amy can’t stop gushing about how amazing her boyfriend Ben is. She says she’s met his whole family and even warned them about the media attention they would get, guiding them on the beauty of “no comment.” “I told them, ‘Look, journalists are going to call you, because it’s what they do, and they’re going to come to the house,’ and they did,” Schumer says. “I told [Ben’s mom] Deb, “Just say ‘no comment.’ She’s like, ‘I got it, Ame. I got it. No comment. Not a problem. Not even 10 minutes later, I get a Google alert that says that Deb was like, ‘I’ve never heard of her before in my life.’ Too far Deb!” Looool we love you Deb!

3. Megan Fox totally owned the media with this Instagram yesterday. Yesterday’s news that Megan Fox was pregnant came as a bit of a surprise, since her and husband Brian Austin Green had seemed to be estranged. People were quick to assume maybe he wasn’t the father, so Megan posted an Instagram collage featuring her Transformers, TMNT and New Girl costars with the hashtag #notthefather. Maury style! She and Brian have since confirmed he is the father and were spotted out and about together, her baby bump in tow. (via @the_native_tiger)

4. Anna Faris and Chris Pratt continue to be the world’s most adorable couple oh my god why are they so cute. On Anna’s podcast Anna Faris Is Unqualified, she speaks to guest Olivia Munn about the fact that her and hubby Chris would love to have a big family, but need to be cautious due to complications with her first pregnancy. Then she goes on to make us melt into a puddle of feels. “What makes up for whatever is happening down in your pelvic floor area, is Chris’ face when Jack was being born is unforgettable,” she added. “He was holding my hand and he was just sobbing. I was scared he would be turned off by the whole thing… That was amazing, seeing his face.” (h/t People, photo via Kevin Winter/Getty Images)

Gemma Toothpicks first potty break. She only gets a few minutes to stretch her legs and she just wanted to thank all of you for all the love! She is 100% feeling it! This little unicorn is a prize!!! Gosh she's special! ❤

5. This tiny dog with the massive pink leg casts is your humpday inspiration. Little Gemma needed surgery and is now recovering wonderfully thanks to the Purposeful Rescue organization. CRY. (via Facebook)

6. Quote of the day: “She’ll be there.” — EW reports that a rep for Kesha says she’ll make an appearance at Coachella this weekend. As unconfirmed as this is, we got chills.

Tell us your best mid-week motivators on Twitter at @BritandCo!