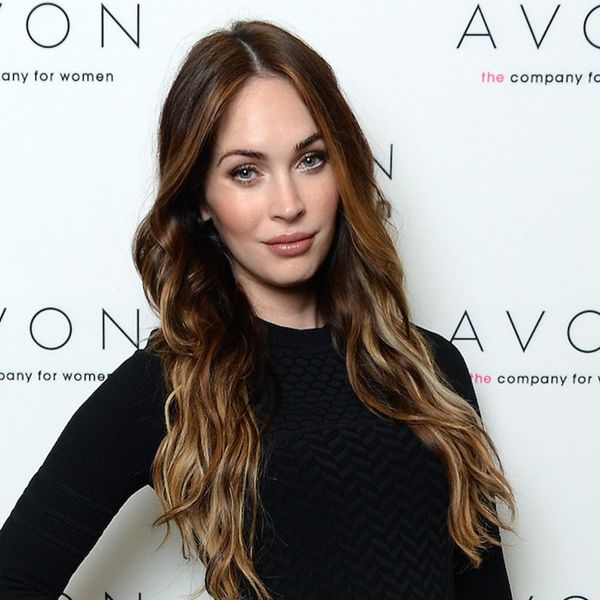 1. Well, this caught us by surprise! Megan Fox showed off an adorable baby bump in an amazing black Versace dress at CinemaCon on Monday, where she and Will Arnett were promoting their new movie Teenage Mutant Ninja Turtles: Out of the Shadows. Megan and husband Brian Austin Green have two children already, though the pair had been estranged for a while and Megan filed for divorce in August. In recent months, however, the pair have been spotted together again. Congrats! (h/t People, photo via Alberto E. Rodriguez/Getty)

2. Audrina Patridge and her fiancé take the cutest baby bump photo. Audrina has been total pregnancy goals tbh, with her glowing pride and excitement and, um, mainly her amazing maternity fashion. But the fun that her and fiancé Corey Bohan seem to be having with it is also next level. “2 buns and 1 in the oven” she captioned the above pic — which, honestly, we’re dying. So. Cute. (via @audrinapatridge)

3. Lea Michele’s cute new tattoo has very personal meaning. The former Glee star revealed on Monday that her grandmother recently passed away, posting on Instagram a photo of a small coffee cup freshly tattooed inside of her ring finger. “I lost my beautiful grandma this week,” she wrote. “She wasn’t your typical grandma. She gave me my first cup of coffee when I was 8 years old. She said something inappropriate to every boyfriend I’ve ever had. She never made pie or knit me a sweater. But she was my grandma and I loved her. More than anything. I love you Grandma.” (via @msleamichele)

4. These Will and Kate masks people are wearing to welcome them to India are hilarious and terrifying. Can’t. Unsee. (via Buzzfeed, photo via Buzzfeed/Getty)

5. Got Coachella FOMO? Youtube to the rescue! The massive music festival starts this weekend and Youtube will be streaming performances and interviews from the first weekend. The acts that’ll be streamed haven’t been announced yet, but fans will be updated as the week progresses. *Fingers crossed for LCD Soundsystem*

6. Quote of the day: “She’s quite liking being top dog.” — Emily Blunt on her young daughter’s refusal to accept that there will be another baby soon. (via ET)