8 Inspiring Celeb Commencement Speeches That Apply to Everyone 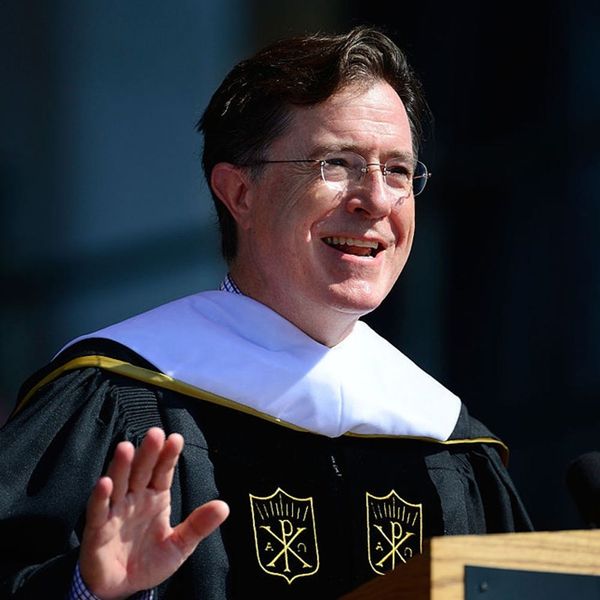 While you’re savoring each and every moment of your last days before graduation, you’re probably also job hunting, interviewing, looking for a decent apartment and casually (but not casually at all) trying to figure out what the hell to do with your life. It’s natural to look for some direction in such an emotional, uncertain time, but you know as well as we do that the more people you ask, the more opinions you get. Why not get advice from people who have reached the top of their fields. Scroll on for some brilliant advice on what lies ahead.

1. Sheryl Sandberg: Get on a rocket ship. At her Harvard commencement address in 2012, Sheryl told her story of moving to Silicon Valley and looking for a job. She received a few offers, including one from Google to become their first business unit general manager. It sounds like an amazing opportunity now, but as she put it, “At the time, no one thought consumer Internet companies could ever make money.” So she sat down with Google’s new CEO at the time, Eric Schmidt, who told her not to be an idiot: “Get on a rocket ship. When companies are growing quickly and they are having a lot of impact, careers take care of themselves. And when companies aren’t growing quickly or their missions don’t matter as much, that’s when stagnation and politics come in. If you’re offered a seat on a rocket ship, don’t ask what seat. Just get on.” Definitely something to keep in mind as you’re making decisions about your first job. (via Harvard Business School)

2. Conan O’Brien: Don’t fear failure. Another Harvard commencement address, another fantastic piece of advice. Conan O’Brien spoke about the fear of failure, positing that “your biggest liability is your need to succeed.” He recalled, “I left the cocoon of Harvard, I left the cocoon of Saturday Night Live, I left the cocoon of TheSimpsons. And each time it was bruising and tumultuous. And yet every failure was freeing, and today I’m as nostalgic for the bad as I am for the good. So that’s what I wish for all of you — the bad as well as the good. Fall down. Make a mess. Break something occasionally. Know that your mistakes are your own unique way of getting to where you need to be. And remember that the story is never over… I will go now to make bigger mistakes and to embarrass this fine institution even more.”

3. Former Yahoo CEO Carol Bartz: The economy is cyclical, and your career is long. Granted, the job market is looking better for you than it was when Bartz gave this speech back in 2012, but the gloom-and-doom headlines about millennials are still going strong! “Look past the gloom and doom headlines, and actually don’t believe that the events of today are the ones that are going to shape your future. Because your work life is very, very long. You’re the first generation that is preparing for a 50-year work life… so think of it as a chance to find and discover new things. If you start a job or business this summer or fall or a year from now, you’re going to realize how much runway you actually have. In the past, people talked about career ladders, and that’s what work felt like. If you were lucky, and you were diligent, and you sucked up and all that stuff, you went up the ladder. Do you want to do that? No. First of all, ladders are very unstable. Do a career pyramid so you have a great base, you can change your mind, you can do a lot of different things.”

4. Maria Shriver: Be present now. Don’t get so caught up in what comes after graduation that you can’t enjoy your last few weeks in the fabulous place you’re sitting right now. “It’s like what we’re doing at this precise moment doesn’t even exist,” Shriver said. “Everyone is focused on the next thing. Everyone is racing to the Next Thing. Well, I got caught up in that for a really long time — so much so, that I could never really enjoy what I WAS doing, because I was always worried about what I was going to be doing.” Don’t fall into that trap. When people ask what your next move is, don’t be afraid to say, “I don’t know. I’m just enjoying this time right now.”

5. David Foster Wallace: You construct your reality. In the greatest commencement speech of all time, “This Is Water,” David Foster Wallace gifted the world with a perspective we think about on a daily basis: “Twenty years after my own graduation, I have come gradually to understand that the liberal arts cliché about teaching you how to think is actually shorthand for a much deeper, more serious idea: learning how to think really means learning how to exercise some control over how and what you think. It means being conscious and aware enough to choose what you pay attention to and to choose how you construct meaning from experience. Because if you cannot exercise this kind of choice in adult life, you will be totally hosed.”

6. Stephen Colbert: Say yes. “Just say yes” is one of the most important tenets of improvisation. Go along with whatever your scene partner does, and then contribute something of your own. “Well, you are about to start the greatest improvisation of all,” Colbert said. “With no script. No idea what’s going to happen, often with people and places you have never seen before. And you are not in control. So say ‘yes.’ And if you’re lucky, you’ll find people who will say ‘yes’ back.”

Sure, that may cause you to be a fool at times, he said, but always be a fool rather than a cynic. “Cynicism masquerades as wisdom, but it is the farthest thing from it. Because cynics don’t learn anything. Because cynicism is a self-imposed blindness, a rejection of the world because we are afraid it will hurt us or disappoint us. Cynics always say no. But saying ‘yes’ begins things. Saying ‘yes’ is how things grow. Saying ‘yes’ leads to knowledge. ‘Yes’ is for young people. So for as long as you have the strength to, say ‘yes.’”

7. Frozen screenwriter Jennifer Lee: Don’t give in to self-doubt. At the University of New Hampshire last year, Lee said, “If I learned one thing, it is that self-doubt is one of the most destructive forces. It makes you defensive instead of open, reactive instead of active. Self-doubt is consuming and cruel. And my hope today is that we can all collectively agree to ban it… Think to the moments of your life when you forgot to doubt yourself. When you were so inspired that you were just living and creating and working. Pay attention to those moments because they’re trying to reach you through those lenses of doubt and trying to show you your potential.”

8. Radiolab’s Robert Krulwich: Don’t just send resumes and wait. This is one of the most important pieces of advice for anyone in the job searching process: Don’t be someone who waits. Krulwich explained that there are people who diligently send out resumes to all the important people and wait for a response. They may even be fantastic resumes. “But there are some people who don’t wait. I don’t know exactly what’s going on inside them, but they have this… hunger. It’s almost like an ache. Something inside you says, ‘I can’t wait to be asked. I just have to jump in and do it.’” Be that person.

What’s your favorite commencement speech? Tweet us @BritandCo and let us know!

This post was previously published on Levo League by Kelsey Manning.

(Featured image via Jeffrey A. Camarati/Getty)