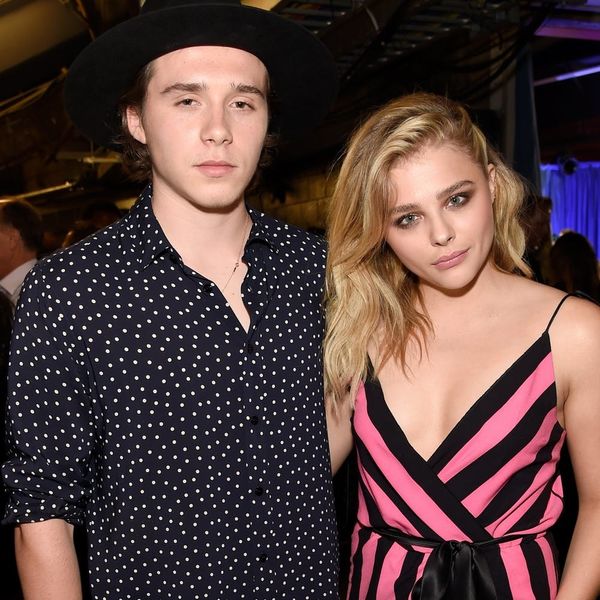 When your boyfriend’s mom is one of the most celebrated fashion designers on the planet, it’s no secret that you’d want to steal a few tips and maybe borrow an outfit or two. But Chloë Grace Moretz just paid tribute to boyfriend Brooklyn Beckham‘s mom in the best way: She wore a Victoria Beckham suit at an event this week, and all we can say is, we are so jealous!

The 20-year-old actress and her 18-year-old beau have been showing major Instagram PDA over the past couple of months. Not only did they make their first official public appearance since rekindling their romance this week, but Moretz attended the Forevermark Tribute event in New York City this week wearing a pinstripe pink suit designed by Posh herself from the former Spice Girls’ Victoria Beckham spring 2018 collection.

The November Criminals star added a a white tee underneath the suit, and finished the look with some white booties, and a Victoria Beckham Vanity bag. The budding style star proved she meant business by pairing her power suit with a bold red lip and slicked-back straight hair. Fierce!

As for her relationship with the fashion icon? Moretz gushed about her, telling People, “We all get along well. I think she [Victoria Beckham] is one of the most incredible, important, smart, sophisticated businesswomen and mothers I’ve ever met.”

Though Brooklyn wasn’t at the event with her, the couple did spend time together at the Xbox One x VIP event the day before, also in New York City. They rocked matching denim ensembles and looked effortlessly cool from head to toe. Moretz also told People that she steals her boyfriend’s clothes, and we can’t say we blame her for that, either!

Do you also love Victoria Beckham’s designs? Share with us @BritandCo.

Arielle Tschinkel
Arielle Tschinkel is a pop culture junkie who went to NYU because the Olsen twins went to NYU (really). She is a freelance writer whose work has also been featured on HelloGiggles, Refinery29, SheKnows, Bustle, Hollywood.com, and many others; and she's living her dream one Britney Spears GIF at a time. Follow her on Twitter @mrstschinkel or visit her website at arielletschinkel.com.
Celebrity Style
Celeb Style
Celebrity Style Designer
More From Celeb Style