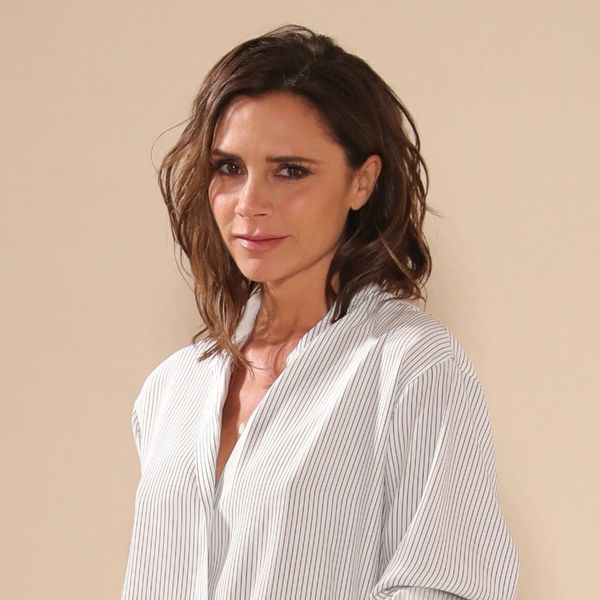 Victoria Beckham has come a long way since her days as a Spice Girl. With a successful designer label and a newly launched line for Target, she’s fashion royalty. Which is why on her birthday, we’re paying tribute to the businesswoman with a look back at some of most memorable looks to date. Happy birthday, Posh!

1. MTV Movie Awards, 2003: Victoria turned heads on the 2003 MTV Movie Awards carpet in a lace-up Dolce and Gabbana dress alongside husband David Beckham, who matched his bride in an all-white tux. (Photo via Kevin Winter/Getty)

3. Bambi Awards, 2006: Two years before she launched her own fashion line, Beckham was a sucker for a good Cavalli, walking the red carpet at the Bambi awards in the fashion legend’s breathtaking creation. (Photo via Ralph Orlowski/Getty)

4. UK Glamour Awards, 2007: Beckham ditched the pants to accept her Woman and Entrepreneur of the Year honors at the UK Glamour awards in a Roberto Cavalli bodysuit, cream cropped jacket, and leather motorcycle gloves. (Photo via MJ Kim/Getty)

5. MTV Movie Awards, 2007: Never afraid to make a statement, the Brit blew the red carpet away when she showed up in… this. Between her metallic pumps, her zebra-print mini (“Just from a shop in New York. It’s no make”), hot pink peekaboo bra, and her fierce blonde pixie, the look was nothing if not memorable. (Photo via Frederick M. Brown/Getty)

6. Victoria’s Secret Fashion Show, 2007: While all eyes are usually on the models at the Victoria’s Secret fashion show, Posh Spice stole the show in the strapless black tulle gown and ‘20s style veil she wore for her group’s Spice Girl’s runway performance. (Photo via Mark Mainz/Getty)

7. Chanel Cruise Show, 2008: Beckham followed fashion etiquette by donning vintage Chanel to the fashion house’s cruise show by Karl Lagerfeld in 2008, though she still stood out from the crowd (as always) thanks to the bright green hue of the design. (Photo via Marsaili McGrath/Getty)

8. Project Runway, Season Four Appearance, 2008: The bold orange shade of the Donna Karan ruched bat-sleeve dress the entrepreneur wore for her stint on Project Runway was an instant attention-grabber. (Photo via Stephen Lovekin/Getty)

9. Mercedes Benz Fashion Week, 2008: Oscar de la Renta was to thank for the chic green and black mini Beckham slayed in during NY Fashion Week back in ’08. (Photo via Andrew H. Walker/Getty)

10. British Fashion Awards, 2009: With her fishtail train and bejeweled sleeve gown from the spring/summer collection, the birthday girl was the belle of the fashion ball. (Photo via Stuart Wilson/Getty)

12. Bergdorf Goodman’s Fashion Night Out, 2009: Beckham took yet another walk on the wild side in thigh-high latex Gucci boots and an eye-popping orange animal print mini. (Photo via Jamie McCarthy/Getty)

13. The Royal Wedding of the Duke and Duchess of Cambridge, 2011: Beckham was pregnant with daughter Harper Seven at the time, but it didn’t stop her from looking chic in a simple navy dress of her own design, a hat by Philip Treacy, and a pair of custom platform, stiletto-heeled Christian Louboutins that required serious *skill* to navigate. (Photo via Fiona Hanson – WPA Pool/Getty)

15. The Met Gala, 2014: The theme of the annual star-studded event that year was “Charles James: Beyond Fashion,” and Beckham showed in a minimalist, white strapless column gown from her own Pre-Fall collection. (Photo via Larry Busacca/Getty)

16. Victoria Beckham for Singapore Launch, 2014: On hand to promote her new line in Singapore, the mother of four donned yet another of her own looks in a gorgeous white mini with marabou trim. (Photo via Suhaimi Abdullah/Getty)

17. British Fashion Awards, 2014: You KNOW you’re dealing with a style diva when she can make a basic turtleneck sweater and maxi skirt (from her own line, natch) look elegant AF. *Bowing down* (Photo via Pascal le Segretain/Getty)

18. Café Society Premiere, 2016: Giving us yet another spin on the menswear trend, the “Say You’ll Be There” singer’s own Victoria Beckham jumpsuit consisted of a black and white strapless sweetheart top tucked into high-waisted button-down trousers. (Photo via Pascal Le Segretain/Getty)

Which look was your favorite? Share with us @BritandCo.

Nicole Briese
Nicole is the weekend editor for Brit + Co who loves bringing you all the latest buzz. When she's not busy typing away into the wee hours, you can usually find her canoodling with her fur babies, rooting around in a bookstore, or rocking out at a concert of some sort (Guns N' Roses forever!). Check out all her latest musings and past work at nicolebjean.com.
Celeb Style