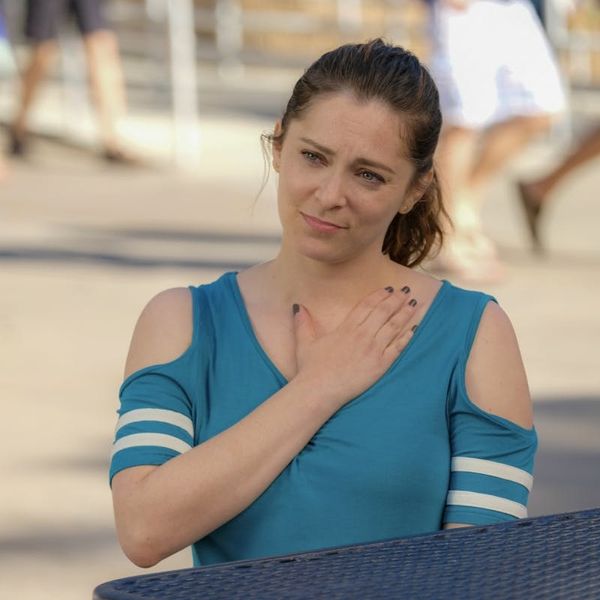 When Crazy Ex-Girlfriend premiered in 2015, it was unlike anything else on TV at the time. Co-created by and starring Rachel Bloom, the show combined elements of satire and romantic comedy with honest portrayals of mental health issues — all wrapped up in a musical theater parody anchored by ambitious and elaborate original songs. After four years, there's still nothing else quite like it, but there are lots of other smart and quirky series that will help fill the void it's leaving in our TV schedules (and our hearts). Here are nine to add to your binge-watching queue. (Photo via Erica Parise/The CW)

Shrill: Loosely based on Lindy West's book of the same name and quickly becoming a cult favorite (not unlike Crazy Ex-Girlfriend), Shrill stars Aidy Bryant as a dissatisfied aspiring writer who changes her perspective to change her life. It's empowering to watch shows by, about, and entirely from the perspective of women who learn to love and accept themselves as they are — and to see it happen in a world that allows unabashed expressions of emotion and joy. (Photo via Allyson Riggs/Hulu)

The Good Place: One of the reasons we love The Good Place so much is that it's a show about looking in the mirror that is your mortality and facing all of your flaws and mistakes — and then being given a chance to change for the better. Crazy Ex-Girlfriend's Rebecca Bunch isn't dead like Eleanor on The Good Place, but they're both trying to be the best versions of themselves. And isn't that the point? (Photo via Colleen Hayes/NBC)

Schitt's Creek: Like Bloom's Crazy Ex-Girlfriend character Rebecca, the Rose family are outsiders in a new community when we first meet them. Also like Rebecca, they're not entirely sympathetic characters, but they eventually find their place in both the town and our hearts, thanks in large part to some wacky, hilariously off-the-wall scenarios. There are even a few musical numbers sprinkled throughout the show's five seasons. (Photo via Pop TV)

Bob's Burgers: Bob's Burgers loves a good musical moment — there's even a 112-track album with original songs from the first seven seasons of the show. (Photo via Fox)

Superstore: Superstore's hilarious ensemble cast is the heart of the series, and while Crazy Ex-Girlfriend hinges its output a little more on show-stopping musical productions, both shows put a premium on humor and rich backstories. Also, if you like Darryl's awkward but earnest nature, you'll love Cloud Nine store manager Glenn. (Photo via Matthias Clamer/NBC)

Fleabag: On Fleabag, creator and star Phoebe Waller-Bridge plays a self-centered and lost young woman trying to navigate emotional and psychological struggles in the aftermath of a traumatic event. The particular Britishness of Fleabag is a far cry from the musical theater grandness of Crazy Ex-Girlfriend, but there's more overlap here than you might think at first glance. (Photo via Frederick M. Brown/Getty Images)

Bless This Mess: Aside from the premise of leaving behind one life for another in pursuit of happiness, Bless This Mess also seems to share some of the absurd, physical comedy that defined much of Crazy Ex-Girlfriend's run. And like Crazy Ex, which Bloom co-created with Aline Brosh McKenna, it boasts a two-woman creative team (Elizabeth Meriwether and Lake Bell, who costars with Dax Shepard). Catch the series premiere on ABC on April 16. (Photo via ABC/John Fleenor)

Russian Doll: Strange, dark, self-aware, and unexpectedly funny, Russian Doll is yet another show created by and centered around women — in this case, one specific woman, played by Natasha Lyonne, who repeatedly relives and has to try to prevent her own death. In the process, she confronts several difficult truths about herself and her relationships with other people. (Photo via Netflix)

Killing Eve: Where Crazy Ex-Girlfriend has high-energy musical numbers, Killing Eve — yet another show about female characters we don't see enough of on TV — has high-stakes spy games. Both will keep you hooked, though probably in very different ways. As a bonus, Phoebe Waller-Bridge, who also created and stars in Fleabag (mentioned earlier on this list) is behind Killing Eve, so you know you're in for a darkly funny and existential treat. (Photo via BBC America/Sid Gentle Films Ltd.)