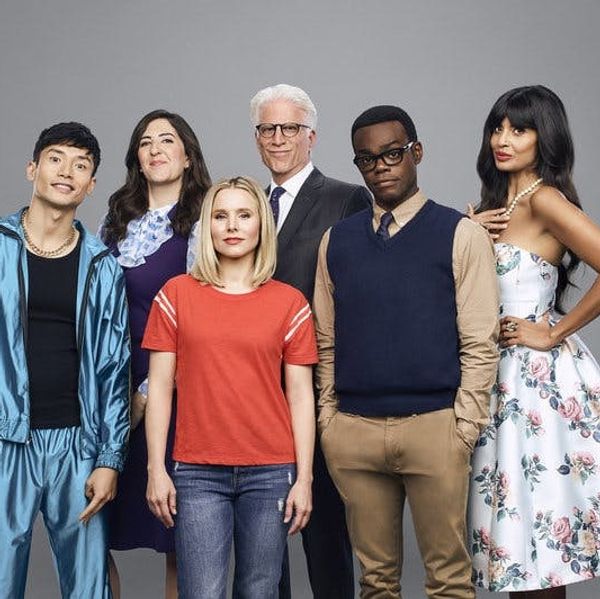 Welcome to Brit + Co's Binge-Worthy Bulletin, a series where we choose one show we're obsessed with and tell you all the reasons why. Chances are, you probably don't need anyone to tell you to watch The Good Place. The NBC comedy, which is based on the premise of accidentally ending up in heaven, is now in its third season, and as it returns from its midseason winter break on Thursday, January 10, it finds itself more beloved by critics and audiences than ever. But if you're one of the few holdouts — or if you want to bask in the show's awesomeness with some fellow fans — click through to find out why we love this wholesome and complex comedy. (Photos via Andrew Eccles/NBC)

The cast and characters: Without a doubt, the strength of The Good Place lies in the characters it has invented and the talented actors who play them. There's the nihilistic and vulgar Eleanor (Kristen Bell), the earnest and indecisive Chidi (William Jackson Harper), the sweet and simple criminal Jason (Manny Jacinto), and the name-dropping socialite Tahani (Jameela Jamil). And among the non-humans, there's also the deceptive immortal being Michael (Ted Danson) and the Siri-esque Janet (D'Arcy Carden).

Each has their own quirks, but as with everything in The Good Place (and real life, natch), there's much more to them than meets the eye. Eleanor is quick to form friendships and eventually learns to put others before herself when it matters. Tahani starts giving back. And even Chidi tries to be better at making decisions in his life. Their growth over the past three seasons is a good reminder to never judge a book by its cover — and it just so happens to make for awesome TV. (Photo via Colleen Hayes/NBC)

Eleanor Shellstrop, the anti-heroine for our times: As the protagonist of the series, Kristen Bell's Eleanor is not your typical hero: She's rude, she's morally questionable, and she doesn't seem to care about much of anyone or anything. But you can't help but feel a kinship with her as the show uncovers the relatable root causes of her attitude and she — sometimes painstakingly — learns to actually be and do better. While at first her efforts are in the hopes of staying in the Good Place, eventually, she just wants to help make the world even a fraction of a bit better. (Photo via Colleen Hayes/NBC)

World building that's rewarding, not overwhelming: Like any show you love, The Good Place has a lot of inside jokes and nuances that you only get if you've been watching from day one. Sometimes, though, a series can hinge too much of what it offers on constructing an obvious meta-narrative at the expense of deeper character or plot development. Luckily, that isn't the case here, so while you'll be rewarded by your devotion to the show, you won't be left unsatisfied or bored by superficial forking fluff. (Photo via Colleen Hayes/NBC)

Constant reinvention: If there's anything you should know about The Good Place, it's not to get too attached to anything, because by the end of an episode, everything you thought you knew about the story could be scrapped for a fresh start. It's not as frustrating as it sounds, though — in fact, it's refreshing to see the show constantly and fearlessly take its stories and characters to new, and often better, places week after week. There's no getting bored of this one. (Photo via Colleen Hayes/NBC)

That Michael Schur magic: Michael Schur is a producer, writer, director, and actor who worked on NBC's The Office and went on to create (or co-create) the beloved TV comedies Parks and Recreation, Brooklyn Nine-Nine, and, of course, The Good Place. His involvement in even one of those slices of TV magic, let alone several, proves that there's a Schurtain magic touch (sorry, not sorry) at work. His shows strive for inclusivity never punch down, and exude a warmth that doesn't exist in much media. They're about building loving and deep friendships first, and from there, just about everything else is comedy gravy. (Ew.) (Photo via Evans Vestal Ward/NBC)

Thought-provoking but accessible laughs: For a half-hour comedy whose characters are trying to learn the meaning of "good" — a premise is that is rooted deeply in well-researched and vetted philosophical quandaries — The Good Place somehow avoids getting lost in its own cleverness. At the center of everything these characters say and do is true heart — not a desire to win an intellectual debate — and while there's nothing wrong with watching something that makes you think, The Good Place wants to be on the journey to enlightenment with you, whether it's through a fart joke or a complicated textbook thought experiment. (Photo via Colleen Hayes/NBC)

Janet: She's not a robot, and she's not a human. She's just the unifying force between the good and the bad and all the facets of the several universes. She's the all-knowing guide to the afterlife. She's Janet, and she's played perfectly, serenely, by actress D'Arcy Carden, the undeniable breakout star of the show.

Carden has handled every twist tossed her way, including Janet's very human-like (not a human!) love for Jason, who throws her robot-like (not a robot!) neutrality for a loop. She also starred in a season 3 episode in which there were seven (!) Janets all at once. (Photo via Colleen Hayes/NBC)

Its big, mushy heart: At the core of The Good Place — and any Michael Schur show, for that matter — is its heart. As in life, there's difficult conflict and hard-won resolution, failure and success, love and vulnerability, and a million other highs, lows, and everything in between. The human experience is a messy and hard thing. But it's also joyful and weird and kind of hilarious — just like The Good Place. (Photo via Colleen Hayes/NBC)