18 Unusual Ways to Style Up Your Sunnies 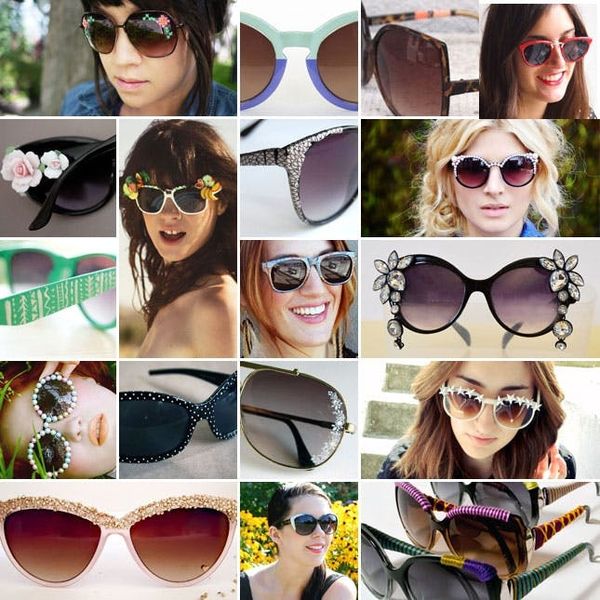 Summertiiiiime, and the living’s easy. We have to admit, we have a bit of a sunglasses addiction around here. From $2 faux Wayfarers to fancy Kate Spade sunnies, who doesn’t love a new pair of sunglasses?

Instead of letting your already mounting sunglasses pile grow too much this summer, why not update a pair of existing shades? Here are 18 unusual ways to spruce up your sunnies – and, yes, glitter is involved.

We’ll start on the more subtle end of the spectrum. These aviators were embroidered using embroidery thread. (via Honestly WTF)

Color blocking seems to have taken over summer yet again! These two wine sunnies were made with nail polish. (via P.S. I Made This)

For a more minimal color pop, go for simple stripes on the arms of your glasses. (via We See Rainbows)

And now to the less subtle looks. Likely inspired by Chanel, these glam shades were made using flat-back pearls found on Etsy. (via Mr. Kate)

For some reason, these make us want to sing that old sunscreen jingle, “get on the boat, the banana boat!” (via Threadsence)

So into the floral trend you want to wear it on your face? A modern day Marie Antoinette would certainly approve. (via Honestly WTF)

These scream fireworks, the 4th of July, and hot summer nights. And yes, sometimes it is totally appropriate to wear your sunglasses at night. (via The Fashion Junki)

Sonia Rykiel and Chanel just might argue that pearls are actually a girl’s best friend. (via Doe Deere)

This simple and fun trick can be recreated using a toothpick and nail polish, white out, or a paint pen. (via By Wilma)

The jewels on these are old costume earrings! We love it. (via Style.it / Moda)

Who ever thought something Miu Miu inspired would be one of the more subdued options on any list? (via Because I’m Addicted)

Guess what was used to create the lacy effect on these shades? Nail stickers! (via Studs and Pearls)

We love the white tribal inspired pattern on these, and think a fine point paint pen would make for even cleaner lines. (via Little Birdy Told Me)

For a different take on the cat eye, add a bit of glitter. (via The Glitter Guide)

Stay tuned for our own take on beaded sunglasses in the next week! (via Glitter ‘N Glue)

Another win for nail stickers! Bonus points if you coordinate your nails with your sunnies. (via Studs and Pearls)

We’re big fans of the yarn bombing street art trend, and love seeing it on a smaller, wearable scale. (via Refinery 29)
Anjelika Temple
As Co-Founder and Chief Creative Officer of Brit + Co, Anjelika Temple brings her voracious consumption of all things creative and colorful to DIY projects, geeky gadgetry finds and more. When she's not DIY-ing her heart out, you'll find her throwing dinner parties with friends or adventuring with her husband David, their daughters Anokhi and Indira, and their silly dog Turkey.
Sunglasses
Fashion
Sunglasses